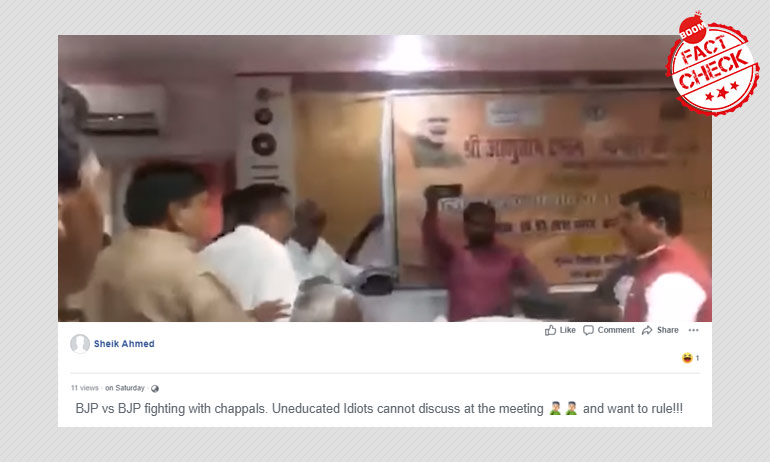 A nearly one year old video from Uttar Pradesh capturing a Bharatiya Janata Party (BJP) MP thrash a BJP MLA with a shoe, has resurfaced online with posts failing to mention that the video is from March 2019.

The clip is being shared over the last 24 hours, with captions mocking the party.

The video is being widely shared on social media and WhatsApp with the caption: "BJP vs BJP fighting with chappals. Uneducated Idiots cannot discuss at the meeting and want to rule!!!"

Below is a screenshot of the video posted to Facebook.

Click here to view the video, and here for an archive.

Many other users have posted the similarly captioned video:

View more of the same uploaded videos on Facebook here, and here. Their respective archives are available at this, and this link.

BOOM found that the video had been reported in the news widely when it was first went viral in March 2019. A video report by Hindustan Times, plays out the entire incident with a detailed narrative as to what had taken place.

The District Planning Committee of Sant Kabir Nagar had called for a meeting to discuss some projects at the district headquarters on March 5, 2019. An argument ensued between Lok Sabha MP Sharad Tripathi and MLA Rakesh Singh Baghel, both from the BJP, when Tripathi expressed his displeasure at his name being missing from a foundation stone for a local road. After Baghel responded that it was his decision, Tripathi made his way towards Baghel, removing his shoe and began to hit the MLA with it. The scuffle intensified when the MLA Baghel got up and struck back at the MP. Only after the intervention of other party members and a policeman did the brawl break away.

According to News 18, the events took place at the Collectorate Auditorium at Sant Kabir Nagar, nearly 200 km from Lucknow. The state's BJP chief MN Pandey told ANI that strict disciplinary action would be taken against both the party's representatives as they were summoned to the state capital, Lucknow.

M N Pandey, UP BJP President on brawl between BJP MP Sharad Tripathi and BJP MLA Rakesh Singh Baghel: We have taken cognizance of this condemnable incident and both have been summoned to Lucknow. Strict disciplinary action will be taken. pic.twitter.com/a0FUvYnpnr

During last year's Lok Sabha elections, Tripathi was denied a ticket. Rakesh Singh Baghel continues to be an MLA from the Mehdawal constituency in UP.