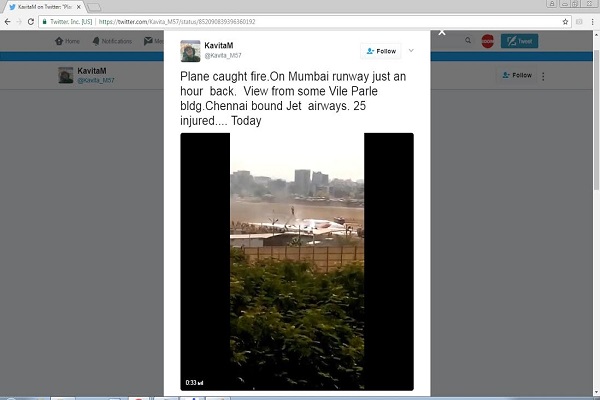 This video tweeted by @Kavita_M57 claimed that a Jet Airways aircraft had caught fire on the runway of Mumbai airport. The tweet also claimed 25 passengers were injured.

We contacted Jet Airways and alerted them about the video circulating on Twitter. They denied any such incident had taken place and said they will issue a statement.

@Kavita_M57 Hi Kavita, we wish to clarify that no such incident has been reported at Mumbai today.

A source at the Mumbai airport said that this video could have been shot several weeks back when the airport conducted a mock drill. The source pointed out that the aircraft in question is not a real one but a model used in mock drills.

Interestingly, even before Jet Airways got into action, some twitterrati had already pointed out it is an old video.

@Kavita_M57 @RidlrMUM Old story. Was a mock drill a month back

While such videos can go viral weeks after it was originally shot, what stood out about this tweet was the precise number of people injured in the mishap. This is usually a figure airlines would give out hours after an incident has occurred.

BOOM will fact check and bust fake news. If you see anything that deserves our attention, please tag us on Twitter @boomlive_in