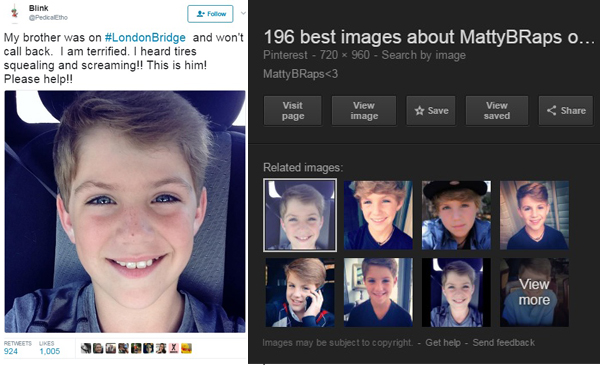 Micro-blogging site Twitter has been flooded with bogus tweets and pictures over the weekend claiming to show family members desperately looking for loved ones after the London Bridge attack on Saturday.

Seven people were killed and 48 injured after terrorists drove a van into pedestrians on London Bridge and then stabbed revelers in the nearby Borough Market area on June 3rd.

While Londoners took to social media to tell others they were safe, some used the opportunity to create fake posts to harness Retweets and Likes. Pictures of little known YouTube personalities have been used in most cases.

Watch out for the below fake tweets.

My bro went missing after the #LondonBridge incident I was on the phone with him as it happened let me know if he's safe and RT to find him pic.twitter.com/QIzUWdW4c3

Fact: The picture is of Vincent a.k.a Vinny Vinesauce, creator of the gaming YouTube channel Vinesauce.

My brother was on #LondonBridge and won't answer the calls. I'm so terrified about him. This is him! Please RT ! pic.twitter.com/QuDsju0iMk

Fact: The picture is of one Devon Sweeney who has a YouTube channel by the same name.

I want you all to myself because I'm selfish you don't need no buddy else. pic.twitter.com/7HnfS7PSrd

My brother was on #LondonBridge and won't call back. I am terrified. I heard tires squealing and screaming!! This is him! Please help!! pic.twitter.com/lc9XQCarjU

Fact: This is a picture of YouTuber MattyBRaps

My brother (mentally retarded) is still missing and I fear he could have been injured in the #LondonBridge attack. Please RT! pic.twitter.com/G76rPbYTZ7

Fact: This is a picture of David Sheratt who shared the fake Tweet when he discovered it.