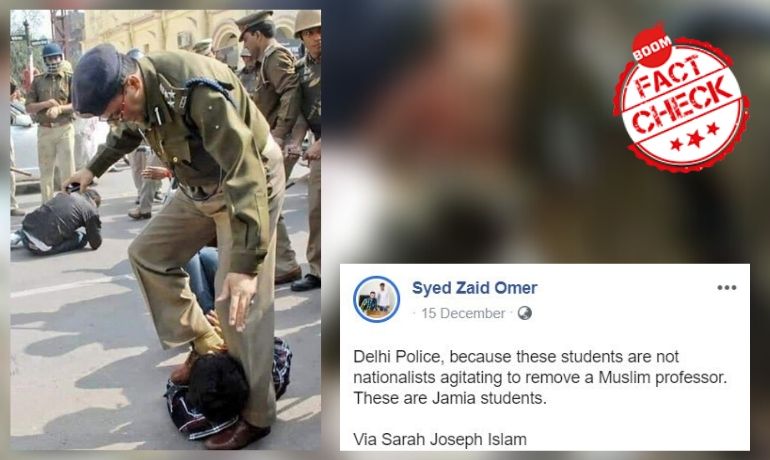 An eight year old image of a policeman putting his boot on a man lying on the street is being falsely shared as proof of Delhi Police's excesses against protesters from Delhi's Jamia Milia Islamia University.

The image has gained new currency in wake of protests by students at several universities in India, against the Citizenship Amendment Act. Videos and images of police cracking down on protesters at Jamia Milia Islamia University and Uttar Pradesh's Aligarh Muslim University have drawn public ire.

The photo is being shared with a caption that claims, "Delhi Police, because these students are not nationalists agitating to remove a Muslim professor. These are Jamia students."

The caption is also a dig at a separate agitation by students of Banaras Hindu University (BHU) over the appointment of a Muslim in the Sanskrit faculty. (Read more here)

The image is viral in several other languages with various captions showing the Delhi Police in poor light.
The photo is doing the rounds of Twitter too.

Delhi Police, because these students are not nationalists agitating to remove a Muslim professor.#SOSJAMIA pic.twitter.com/MtWfqJzejf

Delhi Police, because these students are not nationalists agitating to remove a Muslim professor. These are Jamia students.
Via Sarah Joseph Islam#Delhiviolence #Delhi #DelhiPoliceGundaGardi #DelhiFire pic.twitter.com/FF0tikp5hn

Fact Check
We did a reverse image search of the photograph using Google. We found the same image with caption 'Anand Bhadauria being assaulted by then Lucknow DIG, DK Thakur in 2011' in a private blog spot named indiangooseberies.
A further search on Google using the key words directed us to an article by Catch News titled 'Civil war in SP: Akhilesh, his uncle and the three aides he won't let down'.
The article states the photograph was taken in 2011 when Samajwadi Party workers protested against the arrest of Akhilesh Yadav. The policeman seen in the picture is then DIG (Deputy Inspector General) of Lucknow, DK Thakur and the person who was being assaulted is Anand Bhadauria, an SP leader.
Metadata of the photo on Catch News' site confirms the photo was taken on March 9, 2011.
A report by One India states that following the incident DIG DK Thakur was transferred to Mirzapur.
The photo was earlier falsely shared on social media with the claim that it shows the Indian army assaulting Kashmiris.