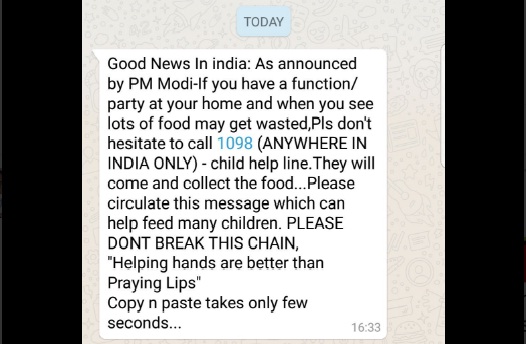 The above WhatsApp message asking people to call 1098 to pick up excess food at private parties and events to curb wastage of food is false. In fact, 1098 is a 24- hour emergency helpline for street children in distress created by the CHILDLINE India Foundation. The chain message has gone viral to such an extent that Childline India has had to put up a notice on its homepage saying the message is not true.

A source familiar with CHILDLINE India Foundation told BOOM that such calls could potentially be harmful in case a child in an emergency was unable to reach the organisation.

The source said out of the total phone calls the organisation received in a day, 15 percent were from people asking Childline India to pick up their left over food.

While Childline politely tries to educate such callers on the work their organisation does, the calls involved diverting time and energy, according to the source. The source did not wish to be named as the person was not authorized to speak to the press.

Childline India has a message on its homepage that distances itself from the chain mail and clearly states that it does not pick up or distribute food. Furthermore, the number 1098 is exclusively allocated to the Childline by India's telecom department, according to Childline's website.

BOOM believes the WhatsApp forward was originally a chain email going back to 2009 and has been given a new lease of life on WhatsApp. On March 26, 2017 Prime Minister Narendra Modi did in fact speak about food wastage in the 30th episode of his Mann Ki Baat radio program but the prime minister did not ask people to call 1098 to pick up any left over food.

To know more about what Childline does, click here.

Childline India's objective is to reach out to the following vulnerable sections of children:

-Street children and youth living alone on the streets

- Child labourers working in the unorganised and organized sectors

- Child victims of the flesh trade

- Children abandoned by parents or guardians

- Children who are victims of substance abuse

- Children in conflict with the law

- Children affected by conflict and disaster

- Children whose families are in crises

childline Childline India Foundation email Fact Check fake news food wastage hoax India India food wastage Mann Ki Baat Modi Narendra Modi WhatsApp
If you value our work, we have an ask: Our journalists work with TruthSeekers like you to publish fact-checks, explainers, ground reports and media literacy content. Much of this work involves using investigative methods and forensic tools. Our work is resource-intensive, and we rely on our readers to fund our work. Support us so we can continue our work of decluttering the information landscape. BECOME A MEMBER
📧 Subscribe to our newsletter here. 📣You can also follow us on Twitter, Facebook, Instagram, Youtube, Linkedin and Google News 📝Stay updated with all our latest fact check stories.