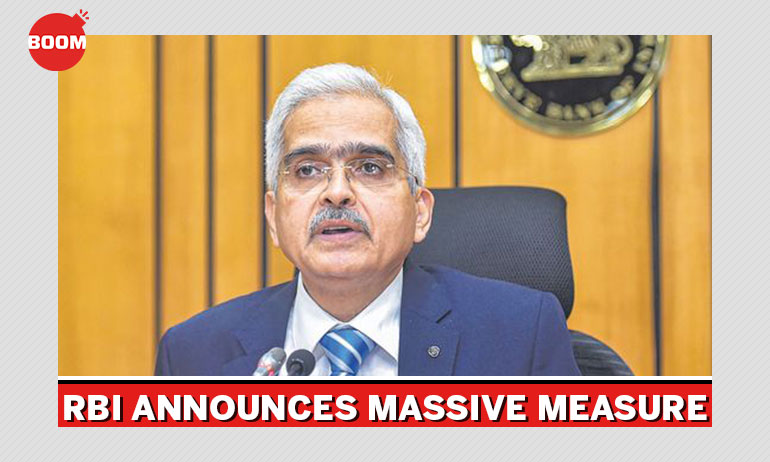 The Reserve Bank Of India (RBI) Governor Shaktikanta Das announced a bouquet of monetary measures, including a set of rate cuts to the repo rate, reverse repo rate and to the cash reserve ratio, also giving lending institutions the freedom to grant a 3-month moratorium on the repayment of all term loans. These monetary measures came a day after fiscal relief measures worth ₹1.7 trillion (₹1,70,000 crores) was announced by Finance Minister Nirmala Sitharaman even as the country grapples with a shutdown to combat the spread of COVID-19.

"It is time to unleash all the policy measures at our disposal", said Das, as he announced these measures. They are aimed at putting as much liquidity into the banking system as possible and to ensure growth, financial stability of the economy and of the rupee

Overall, the RBI has injected liquidity worth ₹2.8 lakh crores since February 2020, equaling around 1.4% of India's gross domestic product (GDP). These newly introduced measures hold significance as the RBI states that these measures will further take the overall liquidity injection to 3.2%.

BOOM rounds up the top 5 things you need to know -

2. A cut in the cash reserve ratio: The RBI also announced a cut to the cash reserve ratio by 100 basis points (or 1 percentage point) to 3%. This is the ratio of cash that banks need to maintain with the RBI to their total deposits. This relief is expected to give the banking system an additional 1,37,000 crores to boost lending.

4. Market stability measures: To counter large selloffs in equity, foreign exchange and bond markets, the RBI has started a long term repo operation (LTRO) facility worth ₹1,00,000 crores to banks. This liquidity needs to be deployed by banks into investment grade bonds, commercial papers and non-convertible debentures, which can be done through markets, mutual funds or NBFCs.

5. Easing working capital flows: To those availing of working capital through demands drafts and cash credits, the RBI has permitted banks to rework margins and working capital cycles, and to grant interest payment deferrals. The central banks also clarified that the reworked margins and moratorium on loan repayments will not affect creditworthiness, and will not impact credit history.

Editors note: This story earlier cited a report by CNBC-TV 18 which said that credit card debt would not be included in the 3-month repayment moratorium. However, RBI guidelines shared above mentions the inclusion of credit cards. This story has been updated reflecting the same. The error is regretted.