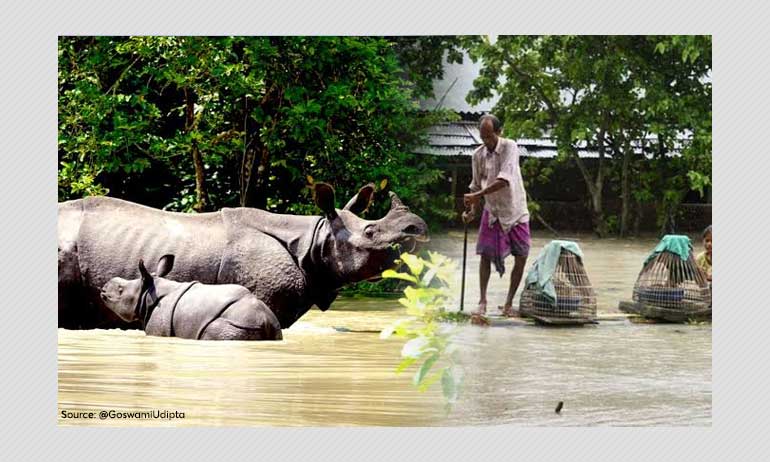 Floods in Assam have caused widespread damage and has claimed the lives of humans and animals alike even as the state wages a battle against COVID-19. 71 people have lost their lives in the flood.

The flooding has affected more than a tenth of Assam's population with 39,79,563 people facing the brunt of the floods across 27 of the state's 33 districts. The government has opened 748 relief camps across the state which are currently housing 49,313 people. The National Disaster Response Force has deployed 11 search and rescue teams in the state.

The floods have caused massive damage to infrastructure with embankments, roads and bridges being adversely affected.

The Kaziranga National Park has been submerged with the authorities reporting 76 wildlife deaths due to the floods. The Hindustan Times reported on July 15 that two rhinos drowned to death in the central range of the park. A rhino calf which got separated from its mother due to flooding in the Agartoli range of the park was rescued by officials.

A female rhino calf was separated from her mother due to high flood in the Agartoli range yesterday. As we could not locate the mother, team CWRC along with @kaziranga_ staffs rescued it and currently under care at our rescue centre-CWRC. @ParimalSuklaba1 @wti_org_India pic.twitter.com/LLPHrDPQ8Z

Park officials have also led tigers who had strayed into villages seeking shelter from the floods back to the park. Out of the 223 anti-poaching camps in the park, 99 have been impacted by the flood and 121 animals have been rescued so far. The Kaziranga is the home of the one-horned rhinoceros with a 2018 census reporting the number of the endangered species to be 2,413. The Kaziranga is also home to the Bengal tiger, elephants, wild water buffaloes and also houses a variety of bird species.

The danger of flooding is yet to subside in the state. The National Disaster Management Authority has issued an orange alert in Assam with the India Meteorological Department forecasting thunderstorms in the state.