Finance Minister Nirmala Sitharaman on Tuesday, during her budget speech, stated that the gross Goods and Services Tax (GST) mop up for the month of January 2022, at ₹1,40,986 crores, was the highest ever since the introduction of the GST tax regime.

The same GST gross collection for April 2021, however, is lower at ₹1,39,708 crores in a reply given to Lok Sabha last November and in the press release outlining the gross GST collection for January 2022.

In her address to Lok Sabha during the presentation of the Union Budget, Sitharaman said in a statement that she said was not a part of her Union Budget address:

"I would like to bring to the notice of this house that the gross GST collections for the month of January 2022 are ₹1,40,986 crores, which is the highest since the inception of GST. This has been possible due to massive economic recovery post-COVID as well as various policy and administration undertaken by central and state tax administrations."

Her statement can be seen below. What we know about the GST numbers?

In a press release on January 31, 2022 at 7:51 pm, the government stated that the GST collection for month of January was ₹1,38,394 crores as of 3 pm on the same day. With respect to the numbers Sitharaman gave in Lok Sabha, which is slightly higher at ₹1,40,986 crores, she stated that she got to know of the numbers earlier today morning before giving the statement quoted earlier in this story.

In April 2021, the government announced that the gross GST collection of ₹1,41,384 crores.

The figure presented by Sithraman in Parliament is lower than what is given above.

However, a Lok Sabha reply as of November 29, 2021 and the governmental press release outlining January's 2022 gross GST collections, the GST collection for April 2021 is marginally lower at ₹1,39,708 crores. This would make the GST figure presented by Nirmala Sitharaman in Parliament the highest yet. 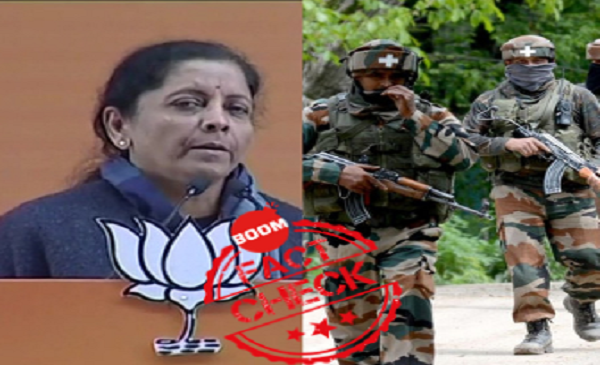 Editor's Note: In the earlier version of the story, we had mentioned that the January 2022 Gross GST collections to be second highest as compared to April 2021 collections. This was based on a Press Information Bureau's release dated May 1, 2021. However, the government had later revised the April 2021 figures lower. This makes the January 2022 collections the highest since GST was introduced. The error is regretted.