A recent study by Pew Research Center revealed that nearly two-third Indians found it important to stop inter-religious marriages, while approximately 63% of the respondents opposed marrying outside caste.

Furthermore, most Indians, across religious lines, saw India's religious diversity as an asset (53%), valued religious freedom, and found respecting all religions as important to being 'Indian' (84%). Surprisingly, a majority of the respondents only formed friendships within their own religious groups, and generally preferred religious segregation.

The study, conducted by Washington D.C.-based think tank Pew Research Center, was carried out between November, 2019 and March, 2021, across different Indian states. 29,999 participants were interviewed for the study, using a sample representative of the country's religious demographics.

Furthermore, a majority of Hindu participants linked their religion to their diet. A whopping 72% of Hindus believed that a person cannot be Hindu if he/she eats cow meat. In contrast, less than half of the Hindu respondents believed that it was important to believe in god (49%), go to temples (48%) and pray (48%), to be a Hindu.

The study also found a strong preference to vote for the Bharatiya Janata Party, among those who linked India's national identity to being Hindu and speaking Hindi.

In the 2019 general elections, 60% of the Hindu respondents, who linked Hinduism and Hindi-speaking as being linked to national identity, voted for the BJP. These views were found to be especially true for the respondents in Northern and Central parts of the country, as compared to the south.

Overall, the study revealed a widespread sense of pride among Indians about their country, region and faith. 97% of the respondents said they were proud to be Indian, while 95% and 94% expressed pride at being a member of their state and religion, respectively.

Despite most respondents having friends from only their own religions, and opposing interfaith marriages, a majority of Indians across religions were willing to have a neighbour from another religion.

The 1947 partition of India is considered to be one of the major historical events between Hindus and Muslims.

Between the two religions, more Hindus (43%) saw partition as being good for Hindu-Muslims relations than Muslims (30%). Nearly half of the Buddhists agreed that partition was good for communal relations, while only 25% of the Sikh respondents agreed to the same. Sikhs were the most likely to agree (66%) that partition was bad for communal relations, followed by Muslims (48%).

Nationalism was not only found to be a strongly linked among Hindus, but among Muslims as well.

A majority of the Muslim respondents said that eating pork (77%) and disrespecting India (70%) will disqualify a person from being Muslim.

Since 1937, Indian Muslims have the option of resorting to officially recognised Islamic courts for settling family and inheritance-related disputes.

An overwhelming majority (74%) of the Muslim participants were found to support access to such religious courts, while it was seen much less supportively by participants of other religions.

Despite the strong preference for religious segregation seen among the participants, there were a list of shared beliefs across all religious lines.

While the caste system, is predominantly for Hindus, most Indians, irrespective of their religion, were found to identify with some caste or another. The survey also found that most Indians across different religions - including those who identified themselves with lower castes - did not perceive any caste discrimination in India.

Karma - a concept native to Hinduism, but not part of Islam, found its proponent in both the religions. 77% of Hindus and equal share of Muslims responded that they believe in karma.

Majority of respondents of both these religions also shared their beliefs in fate. Christians, Hindus and Muslims also shared their beliefs in angels or benevolent spirits, while most Sikhs, Buddhists and Jains did not share this belief.

A majority of Hindu and Jain respondents believed in the purifying power of water from the Ganges, while people across all religions favoured respecting elders. 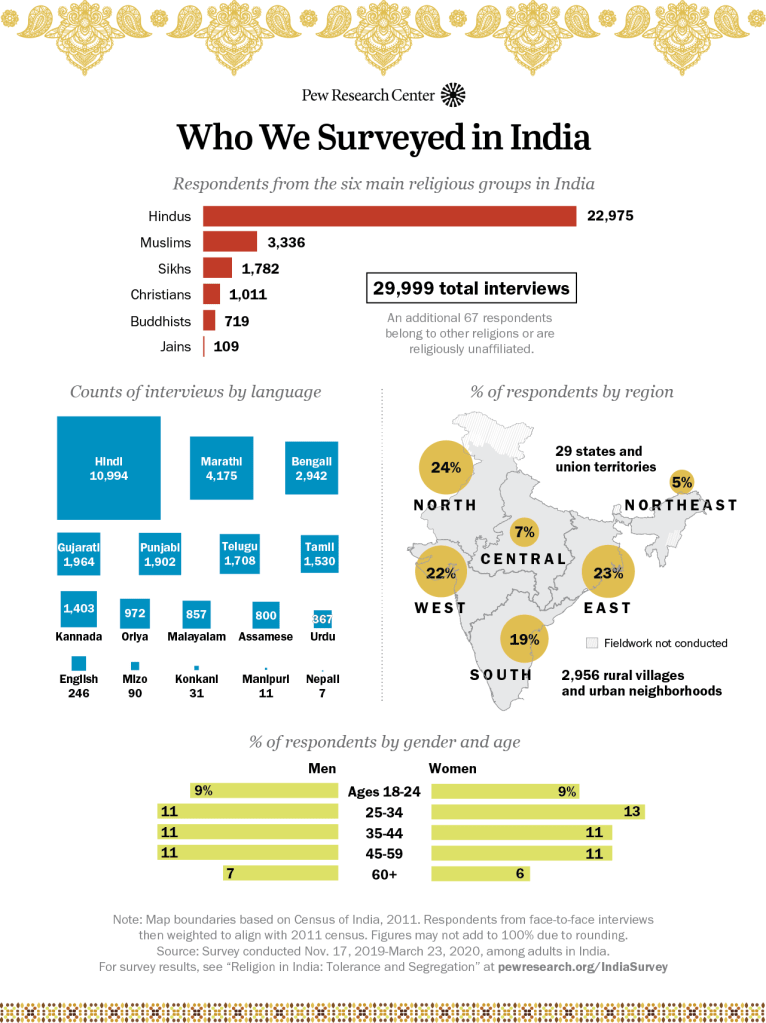 The interviews were conducted under the direction of US-based think tank RTI International.