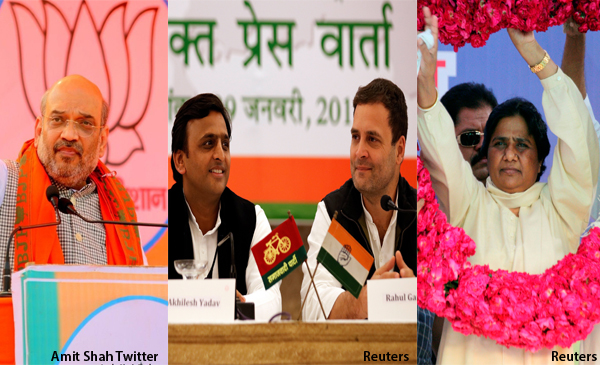 The exit polls may have already handed over one of India’s largest states - Uttar Pradesh, to the Bharatiya Janata Party (BJP), but Congress Vice President Rahul Gandhi is still betting his alliance with the Samajwadi Party (SP) to win the state. Rahul Gandhi today reminded pollsters of ‘Bihar Election 2015’, referring to how majority of the exit polls had given a clear win to BJP, while the JDU- RJD grand alliance emerged as the winner toppling the polls. He believes the same to repeat in Uttar Pradesh on March 11 when the results are out.

However, having taken a cue from the exit polls, ally Akhilesh Yadav indicated that he is open for an alliance with ‘secular forces’, which meant Mayawati’s Bahujan Samajwadi Party.

Our alliance is winning, such exit polls we saw in Bihar also. Will talk tomorrow: Rahul Gandhi pic.twitter.com/C1uP6QycN5

For the BJP, these exit polls have come as a big relief especially after the big debacle in Bihar last year. Uttar Pradesh, the state with a population of over 200 million and which sends 80 MPs to the Lok Sabha, is also an important state for the ruling party to improve its numbers in the Rajya Sabha to ensure key economic legislations are cleared without being at the mercy of the opposition.

NDTV’s poll of exit polls has predicted 211 seats for BJP, 122 seats for the SP – Congress alliance, 61 seats for BSP and 9 to other contestants. 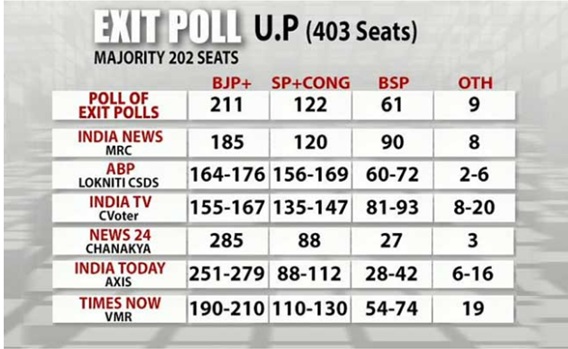 BJP however, has chosen to go with India Today’s Axis Polls which has projected 251-279 seats for the party which means it would sweep the state and form the government with a clear majority.

If the exit polls turn to be true, the BJP would be able to comfortably form the government as it only requires 202 / 403 seats in the Assembly. In the case of BJP winning less than 202 seats, following are its possibilities -

Note : 151 – 160 is the lowest interval taking into consideration the least number of seats predicted for BJP in the exit polls.

In case the above scenarios emerge, the result shall be a hung assembly with all the parties scrambling to form alliances.

The exit polls have already sent the message to party leaders to prepare the ground for alliances. SP leader Akhilesh Yadav said, "In order to stop communal forces and in order to provide security and prosperity to all sections of society, all secular forces have a moral responsibility to come together to give the people of Uttar Pradesh a democratic government." Though he did not mention BSP, it is clear from the mention of ‘secular forces’ that he was extending his hand towards Mayawati.

But, if the above scenarios happen, BJP will also be in no good position. The saffron party would also have to join hands with contestants in the ‘other’ category. The highest seat share allocated to smaller parties and independents in the exit polls is 20. In the case of BJP running short of more than 20 seats, it would undoubtedly look for an alliance with BSP. This would mean going against its campaign rhetoric where it accused both SP and the BSP of promoting mafia rule in the state.

The other possibility in the case of a hung assembly shall be a President’s rule, of which Akhilesh Yadav has also expressed his fear about. Thus, in the scenario of BJP not getting enough seats, BSP is likely to play Kingmaker with both SP and BJP courting them in a bid to rule the state.

Exit polls have frequently gone wrong especially when it comes to a complex state like UP voting on caste lines, and the best of poll strategies come undone. That explains why Rahul Gandhi is hoping against hope that there will be a repeat of the Bihar experience – lose the exit polls but win the actual battle on D-day.

We shall know in a few hours.