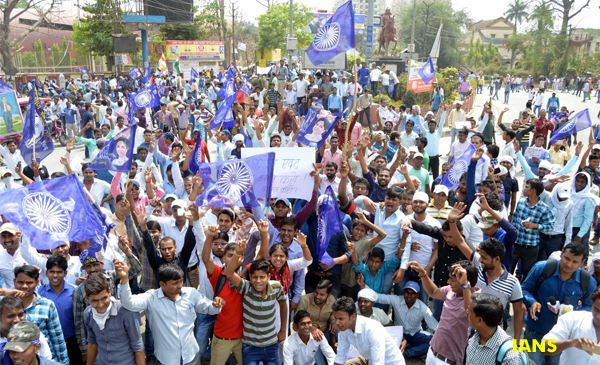 Did the Supreme Court scrap the SC / ST Act?

Lies and only Lies!

CLAIM: On April 3, 2018, Rahul Gandhi in a speech at a rally in Shivamogga said,

FACT: False. The Supreme court has not scrapped the SC / ST Act, but only made certain changes to it. However, this has created much discontent among the community who have alleged that the act has been 'diluted', triggering massive Dalit protests in several states in the country.

Strangely, on March 28, Rahul Gandhi had tweeted in support of the Dalits and had not used the word 'scrapped' but said the provisions were 'diluted'.

The Supreme Court ruling diluting provisions of arrest in the SC/ST Prevention of Atrocities Act comes in the backdrop of growing atrocities against Dalits & Adivasis across India.

Leaders from opposition parties will meet President Kovind this evening to share their concerns.

But, why has the Supreme Court order angered the SC / ST community? BOOM explains.

SC / ST Act refers to The Scheduled Castes and Tribes (Prevention of Atrocities) Act, 1989. It aimed at preventing atrocities against the SC / ST community by other communities and to protect the historically oppressed group from exploitation and discrimination. Under the Act, stringent punishments are prescribed for crimes than what the Indian Penal Code prescribes. Moreover, it also provides special provisions in favour of the victim which enabled immediate arrest of the offender and prevention of anticipatory bail.

What are the changes made?

The March 20 judgement of the Supreme Court division bench comprising of A.K. Goel and U.U. Lalit noted that 'abuse of law' was rampant in the arrests made under the Atrocities Act / SC / ST Act.

1) The directive mandated against immediate arrest of the accused such that public servants can be arrested only with permission of appointing authority and a non-public servant with approval of Senior Superintendent of Police.

2) It approved the grant of bail citing that the Act has 'no absolute bar against grant of anticipatory bail', if there is 'no prima facie case' (invalid case) or the case is found to be 'prima facie malafide' (false case).

3) To avoid false implication of innocents, an FIR is to be filed only after preliminary investigations done under the Deputy Superintendent of Police to find if the case qualifies as an atrocity case and it is not 'frivolous and motivated'. The inquiry must not go beyond 7 days.

What were the reactions to the Court's verdict?

Dalit groups have called it a 'dilution' of the SC / ST Act and have been demanding the repealing of the verdict. On April 2, Dalit groups called for Bharat Bandh followed by massive protests in states such as Gujarat, Uttar Pradesh, Rajasthan and Madhya Pradesh leading to death of 11 persons.

Dalit activist Prakash Ambedkar held the Supreme Court responsible for the violence and asked the government to take action. He cautioned against a 'Syria-like' situation in the country.

The verdict also attracted widespread criticism from political parties forcing the government to go on the backfoot.

We condemn the police firing. Such a situation has arisen because of the failure of the Modi government to present an effective case against the dilution of the Prevention of Atrocities Act. Full text: https://t.co/sGvu5L465c pic.twitter.com/RR9sdGy39G

Noticing the anger among the Dalits, the NDA government has filed a review petition of the order and maintained that they had in fact strengthened the SC / ST Act in 2015.

Review petition by the Government against the SC judgement on SC/ST Protection Act shall be filed positively on tomorrow, Monday, April 2

Through the Scheduled Castes and the Scheduled Tribes (Prevention of Atrocities) Amendment Bill, 2015 the NDA Government has actually strengthened the provisions of the Act. This was done in line with our commitment to the welfare of SC & ST communities. https://t.co/2LCmNeMOoP

Refer to the PIB release on January 25, 2016 when the SC/ST Act was amended by the government to bring new offences under the provisions.

What was the Supreme Court's response to the review petition?

The apex court refused to put a stay on its judgement claiming that it is no dilution of the Act but only a ‘balance’ between Dalit rights and right of an innocent against arrest in a false case’.

Justice Goel said, “Our judgment implements what is said in the Constitution. We are conscious of the rights of the underprivileged and place them at the highest pedestal... but at the same time, an innocent person cannot be falsely implicated and arrested without proper verification. We have not stopped the implementation of the Act. Does the Act mandate the arrest of innocent persons? Our judgment is not against the Act.’

adivasis bandh Dalits featured Narendra Modi Prakash Ambedkar Rahul Gandhi SC/ST Act Shivamogga Supreme court
If you value our work, we have an ask: Our journalists work with TruthSeekers like you to publish fact-checks, explainers, ground reports and media literacy content. Much of this work involves using investigative methods and forensic tools. Our work is resource-intensive, and we rely on our readers to fund our work. Support us so we can continue our work of decluttering the information landscape. BECOME A MEMBER
📧 Subscribe to our newsletter here. 📣You can also follow us on Twitter, Facebook, Instagram, Youtube, Linkedin and Google News 📝Stay updated with all our latest fact check stories.