FACT: The video of Trinamool Congress workers vandalizing the lobby of the West Bengal Legislative Assembly dates back to November 30, 2006 at the peak of the Tata Motors-Singur agitation when TMC legislators protested local police arresting Mamata Banerjee for violating prohibitory orders preventing her from visiting Singur.

A 2006 video shows Trinamool Congress party members vandalizing the lobby of the West Bengal assembly, upturning desks, throwing chairs and destroying furniture has been revived on social media once again and is being shared with misleading text.

The video, which was viral in 2017 with the same fake context, has been shared in the past few days on Facebook, Twitter and WhatsApp.

The misleading text accompanying the video has also been translated into Hindi. (See screenshot of a WhatsApp message below) 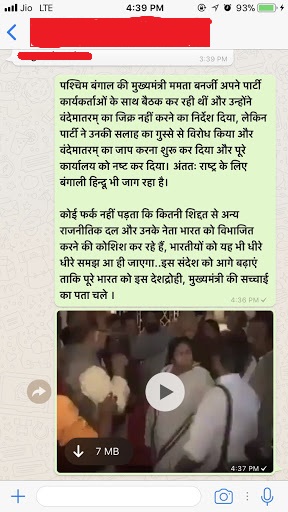 The below excerpt from an article published by DNA in 2006 summarizes what happened on the day. 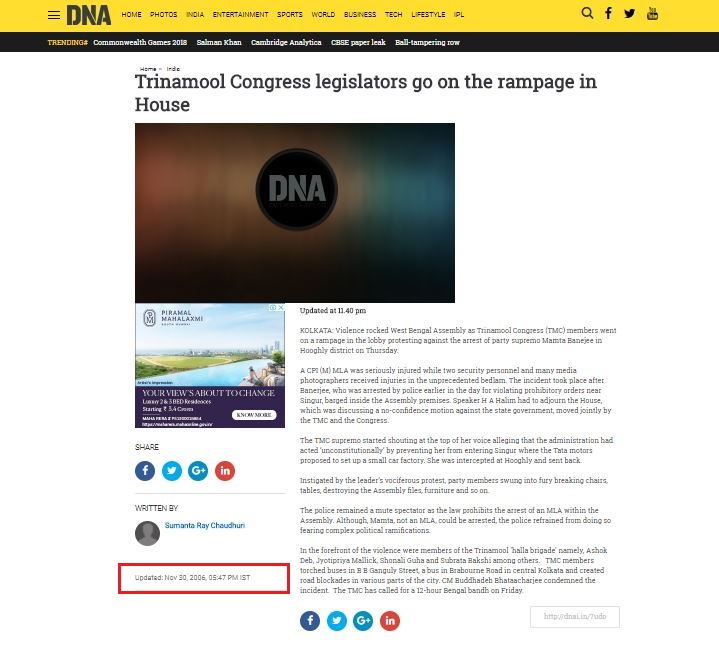 "The TMC supremo started shouting at the top of her voice alleging that the administration had acted ‘unconstitutionally’ by preventing her from entering Singur where the Tata motors proposed to set up a small car factory. She was intercepted at Hooghly and sent back. Instigated by the leader’s vociferous protest, party members swung into fury breaking chairs, tables, destroying the Assembly files, furniture and so on."

According to an article in the Hindu, six MLAs from the Left Front, two staff of the assembly and two journalists were injured when members of both sides of the House came to blows. (Click here to read the Hindu's story)

Ratan Tata's dream project, the small car, which eventually went on to be named 'Nano', originally proposed to be built in West Bengal in 2006 was jinxed from the start. The proposed project between Tata Motors Ltd. and Buddhadeb Bhattacharjee led Communist Party of India (M) was eventually relocated to Gujarat following widespread violence and protests from agitating farmers. A line was finally drawn under the entire Singur fiasco when in August 2016 the Supreme Court set aside land acquisition and ordered the West Bengal state government to return land to all within 12 weeks.

Claim :   Video shows TMC workers going on rampage after Mamata Banerjee barred them from singing Vande Mataram
Claimed By :  Facebook page
Fact Check :  FALSE
fake news featured Mamata Banerjee ruckus Social Media TMC Trinamool Trinamool Congress vande mataram
If you value our work, we have an ask: Our journalists work with TruthSeekers like you to publish fact-checks, explainers, ground reports and media literacy content. Much of this work involves using investigative methods and forensic tools. Our work is resource-intensive, and we rely on our readers to fund our work. Support us so we can continue our work of decluttering the information landscape. BECOME A MEMBER
📧 Subscribe to our newsletter here. 📣You can also follow us on Twitter, Facebook, Instagram, Youtube, Linkedin and Google News 📝Stay updated with all our latest fact check stories.