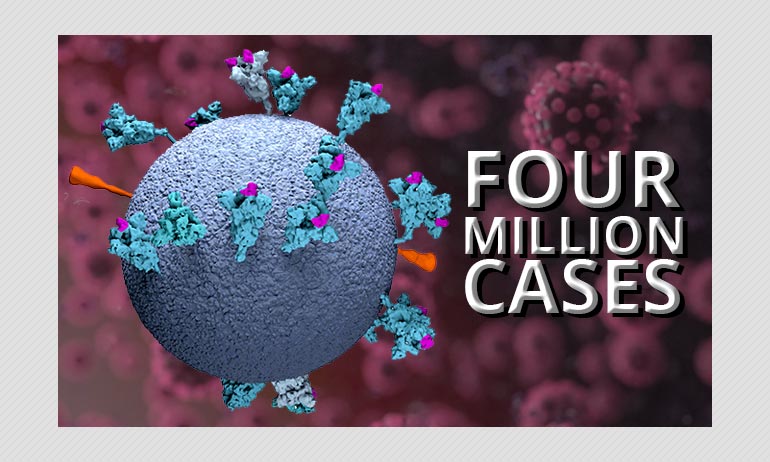 India reported 86,432 new cases in the last 24 hours, the highest one-day spike in cases witnessed globally, raising the total number of cases to 40,23,179. The move from 3 million to 4 million came in only 13 days.

India's trajectory to the four million cases from the time the first one lakh cases were reported can be seen in the graph below.

India has been reporting the highest number of new cases globally, daily since August 7. Interestingly, the 86, 432 cases reported by India in the last 24 hours is only 3,576 cases less than the total number of cases reported by China, where the virus originated. China currently has reported a total of 90,008 cases

For the week ranging from August 30- Sep 5, India's average positivity rate is at 7.69 %. The country has strengthened its testing capacity as it has been conducting more than a million tests daily since August 31.

In a press conference held on Thursday, Union Health Secretary Rajesh Bhushan shared that the five Indian states of Maharashtra, Andhra Pradesh, Karnataka, Tamil Nadu, and Uttar Pradesh account for 62% of the total COVID-19 cases. Maharashtra has been reporting a new daily spike in the number of cases and deaths. The state with a total of 8,63,062 cases, has 1.92 lakh more cases than Peru which has the fifth highest number of cases globally on the basis of geographical boundaries of countries.

Two Indian indigenious vaccines– one by Bharat Biotech and the other by Zydus Cadilla are in Phase I/Phase II trials across the country. The most anticipated Oxford vaccine is also in Phase III trials that are being conducted by the Serum Institute of India.

India is also in talks with several other vaccine candidates for their manufacturing in the country. The WHO has an ACT accelerator for the equitable distribution of vaccines. India has still not made public if the country is a part of the 78 other nations that have already signed up for the accelerator.