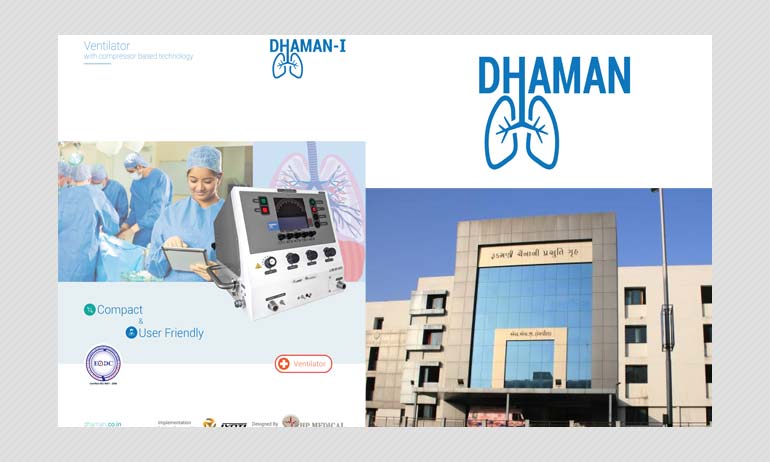 CCTV footage from Vadodara's Sri Sayajirao Gaikwad Hospital show that the fire that broke out on Tuesday, September 8 possibly arose from the 'Made in Gujarat' Dhaman-1 ventilator in the facility. A police official confirmed to BOOM that the blazed and destroyed machine was of the Dhaman make but the source of the fire is still being investigated. Hospital authorities, however, stated that they will await Surat Forensic Science Laboratory's (FSL) investigations to confirm the make of the ventilator.

BOOM contacted Dr. Ranjan Aiyer, Medical Superintendent at SSG Hospital who stated that the fire was an accident and his team of resident doctors were quick to take action. "We have been using Dhaman ventilators and they have helped save lives. I believe that the reason for the fire could be that the machines were continuously being used for over 24 hours but we will wait for the committee and FSL's report." Dr. Aiyer also said that the patients were immediately evacuated.

Police confirm Dhaman-1 ventilator was destroyed in blaze but FSL to investigate whether fire was sparked in the machine https://t.co/xoWJPXVS7L

These ventilators have been under the spotlight since they were first distributed by the Gujarat government to the state hospitals for free in early April. They were credited suitable for use by a National Accreditation Board for Testing and Calibration Laboratories (NABL) accredited quality centre in Gandhinagar. Doctors from Ahmedabad's civil hospital wrote to the government saying that they did not meet requirements for all COVID-19 patients, at the time. They, however, have not been approved by the Drug Controller General of India (DCGI), the chief of the apex drug and medical equipment licensing body in the country

On Tuesday a fire broke out in the ICU ward of SSG hospital. Raopura police officials who are investigating the matter confirmed that it was a Dhaman ventilator that caught fire but the exact cause will only be determined after a thorough investigation by FSL Surat. A four-member committee has been constituted at the district level to deliberate the case.

BOOM contacted Dr. Shailesh Shah, head of the anaesthesiology department at Civil Hospital who wrote the letter. "In April, Ahmedabad was at the peak of the virus and we needed every ventilator that we could get. Dhaman, although effective, was not useful for two types of ventilation: non-invasive and high flow nasal cannula. They later upgraded to high flow nasal but still do not have non-invasive support. We, thankfully, were prepared with ventilators from other countries."

Ventilation can either be conducted by using an endotracheal tube- invasive, through an external ventilatory support- non-invasive or through another supplementary oxygen supply which provides humidified and heated oxygen to the patient.

The ventilators have not received approval from the DCGI. In response to this query, Gujarat Secretary for Health Jayanti Ravi said in a press conference on May 20, that Dhaman-1 did not need one as the Ministry of Health removed the need for licensing of ventilators from April 1, reported Ahmedabad Mirror.

CM Rupani endorsed these machines as ventilators but they were later classified as Ambu-bags.

In and out of PM Cares Fund

Dhaman-1 ventilators were one of the 5 organisations chosen by the MOHFW in May 2020 to receive funds for manufacturing indigenious ventilators under the PM Cares fund. Jyoti CNC was allocated 8 crores for 5,000 ventilators, as an RTI filed by activist Anjali Bharadwaj shows.

However, in her RTI filed in July 2020, the government had removed Jyoti CNC from the list of organizations and reduced the number of ventilators from over 58,000 to 40,000. The RTI reply stated that a technical committee reviewed the products and was now choosing three manufacturers.

In a press conference on August 5, health secretary Rajesh Bhushan explained that the Directorate General of Health Services had reviewed all the indigenious ventilators.They chose AgVa Healthcare and Allied Medical to make 10,350 ventilators to be procured through Hindustan Lifecare Limited (HLL). The remaining 30,000 ventilators were to be produced by Bharat Electronic Limited.

Neither the RTI reply nor the health secretary elaborated on what was lacking in the ventilators of the other two manufacturers and why they were rejected.

BOOM asked both Dr. Shah and Dr. Aiyer if their respective hospitals received the Dhaman ventilators through the PM Cares Fund.

"We received them from the state government, but received the Bharat Electronic Limited ventilators through the Fund," said Dr. Shah. "These are not under the PM Cares Fund as per my knowledge," said Dr. Aiyer.