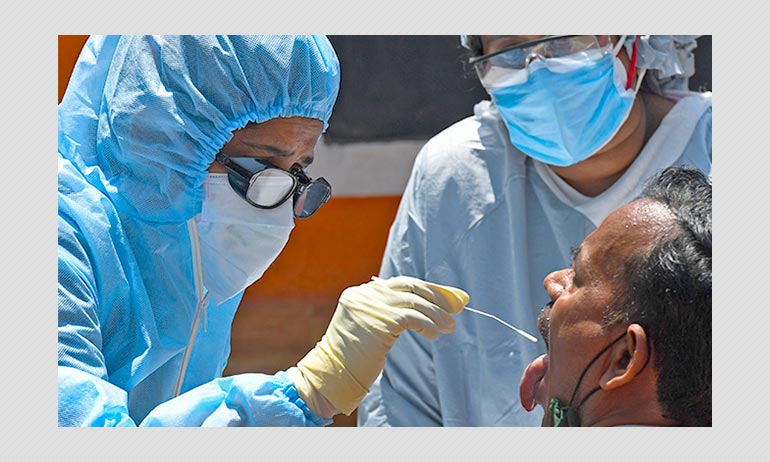 As cases rise in Mumbai with 28,653 active cases and 3,962 deaths, many accounts of people complaining about the lack of ambulances, beds, and crematorium centres are being reported by print, TV and citizens on social media. For citizens, it is imperative now to understand the steps to follow for testing as well as admission to hospitals. BOOM contacted the civic officials and the war rooms to understand the procedure and the steps to take if you suspect COVID-19 infection.

The Brihanmumbai Municipal Corporation (BMC) started decentralized COVID-19 war rooms for all the 24 wards. These war rooms have been designed to assist citizens through symptoms, testing, as well as hospitalization for COVID-19.

An existing BMC helpline '1916' was earlier handling COVID-19 grievances. The contact numbers for each of the 24 war rooms are given below:

According to guidelines by the Ministry of Health and Family Welfare (MOHFW) as well as the BMC, testing for COVID-19 can only be conducted on a doctor's prescription. Health workers and high risk contacts of positive patients who are not exhibiting symptoms are also permitted to be tested.

BOOM reached out to the war room for the R-South ward and was given the number for a dispensary in the vicinity. The doctor's number was however, unreachable and the dispensary was shut.

When BOOM re-contacted the war room with the grievance, we were told to contact a private laboratory or go to Bharatratna Dr. Babasaheb Ambedkar Municipal Hospital for testing.

Testing is done for free in the public health utilities while the Maharashtra government has fixed testing rates for private laboratories. The tests are for Rs. 2,200 if the person goes to the lab to give a sample or Rs. 2,800 if the laboratory collects the samples from home.

The results are issued a day after the samples are collected. This came into effect after Iqbal Singh Chahal, the Municipal Commissioner issued strict orders to labs to provide results in 24 hours as many of the labs were earlier delaying results.

The BMC has also ordered 1 lakh antigen-testing kits that provide results in 15 to 30 minutes.

If a person tests positive and is asymptomatic, the BMC is recommending home isolation. A few patients that BOOM spoke to were asymptomatic and had informed the BMC that they were being isolated at home. Doctors also recommend oximeters in households as oxygen levels can provide an indication for symptoms of breathlessness.

Also Read:What Is A Pulse Oximeter And How Does It Help In COVID-19 Detection?

General practitioners are recommending COVID-19 positive patients to doctors in hospitals that are treating COVID-19 patients. The patient's family or a member of the society they reside in also informs the BMC.

BOOM also asked the RS ward COVID war room about hospitals and beds. The operator replied that Seven Hills and Shatabdi had beds on the given day and they would check for others once results were announced. The war rooms would also help with an ambulance to ferry the patient.

BMC had also launched an application called Air-Venti, according to a Press Trust of India article, for real time information on ICU beds but the app has only data by 8 small nursing homes so far.

Similarly the city has 1481available oxygenated beds from the total 7382 oxygenated beds. The civic body has accumulated over 2 lakh 8 thousand litres of oxygen.

The BMC has a total of 2923 available beds in the hospitals while around 2,73,581 people are currently under home quarantine. Around 20,259 are in institutional quarantine.

Furthermore, the BMC under the guidelines of the Maharashtra government has taken over 80% beds in the private hospitals wherein admission to those beds is under the BMC's control. BOOM probed the R South ward office to understand this allocation better. The operator told us that if the bed was allotted and chosen through the helpline it would fall under the 80% allocation.

However, the charges for services would be determined by the hospitals and would follow the charges fixed by the State Government on May 21.

These charges do not include PPEs, interventional procedures, COVID testing as per the fixed rates of 2,200, high end drugs like immunoglobulins at 10% markup from market price and high end investigations like CT scans and MRI scans.

In a press release on June 21, the BMC stated that through this takeover they audited 26 hospitals of 134 patients who reached out to the corporation with complaints of overcharging. The audit collectively reduced the bills of these 134 people by a total of Rs. 23,42,114. The total amount charged from all the complainants was Rs 1,61,88,819 which came down to 1,38,46,705.

BOOM reached out to six private hospitals to understand how they allot beds under the 80:20 scheme but all of them refrained from comment. BOOM also contacted civic officials who were unavailable for comment.