Multiple Facebook, Twitter and Instagram posts shared hundreds of times claim that wearing a face mask for an extended period of time could cause hypercapnia, a condition caused by a buildup of carbon dioxide in the blood. The claim is misleading; health experts in Thailand have said that as of May 2020, there is no evidence that wearing a mask for a long period can cause hypercapnia. 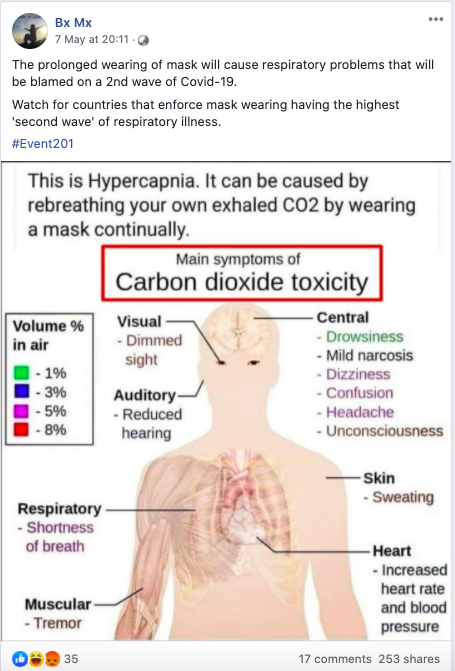 The misleading post's caption reads: "The prolonged wearing of mask will cause respiratory problems that will be blamed on a 2nd wave of Covid-19.

"Watch for countries that enforce mask wearing having the highest 'second wave' of respiratory illness."

It also includes an image that reads: "This is Hypercapnia. It can be caused by breathing your own exhaled CO2 by wearing a mask continually.

The posts were published during the ongoing novel coronavirus pandemic. COVID-19 has killed at least 287,399 people and infected more than 4.1million people, according to World Health Organization data published on May 13, 2020. Some governments and health authorities have subsequently encouraged people to wear face masks in a bid to curb the spread of the virus.

According to the US-based medical website WebMD, hypercapnia is the state when one can't breathe in normally and the carbon dioxide is built up in the bloodstream, causing the blood's pH balance to become more acidic. The symptoms usually include anxiety, headache and shortness of breath.

A similar claim also appeared on Facebook here and here.

A similar claim in Thai, which has been shared for more than 100 times, was posted on Facebook here. It translates to English as: "Don't wear a facial mask for too long, be careful when your blood is too acidic because of oxygen deficiency. This would cause headaches, nausea, weakness, dizziness. Please find time to breathe without a mask!!"

Thailand's Department of Disease Control published this infographic on April 17, 2020, saying there is no evidence that prolonged use of masks can result in the changes of human blood's pH balance. 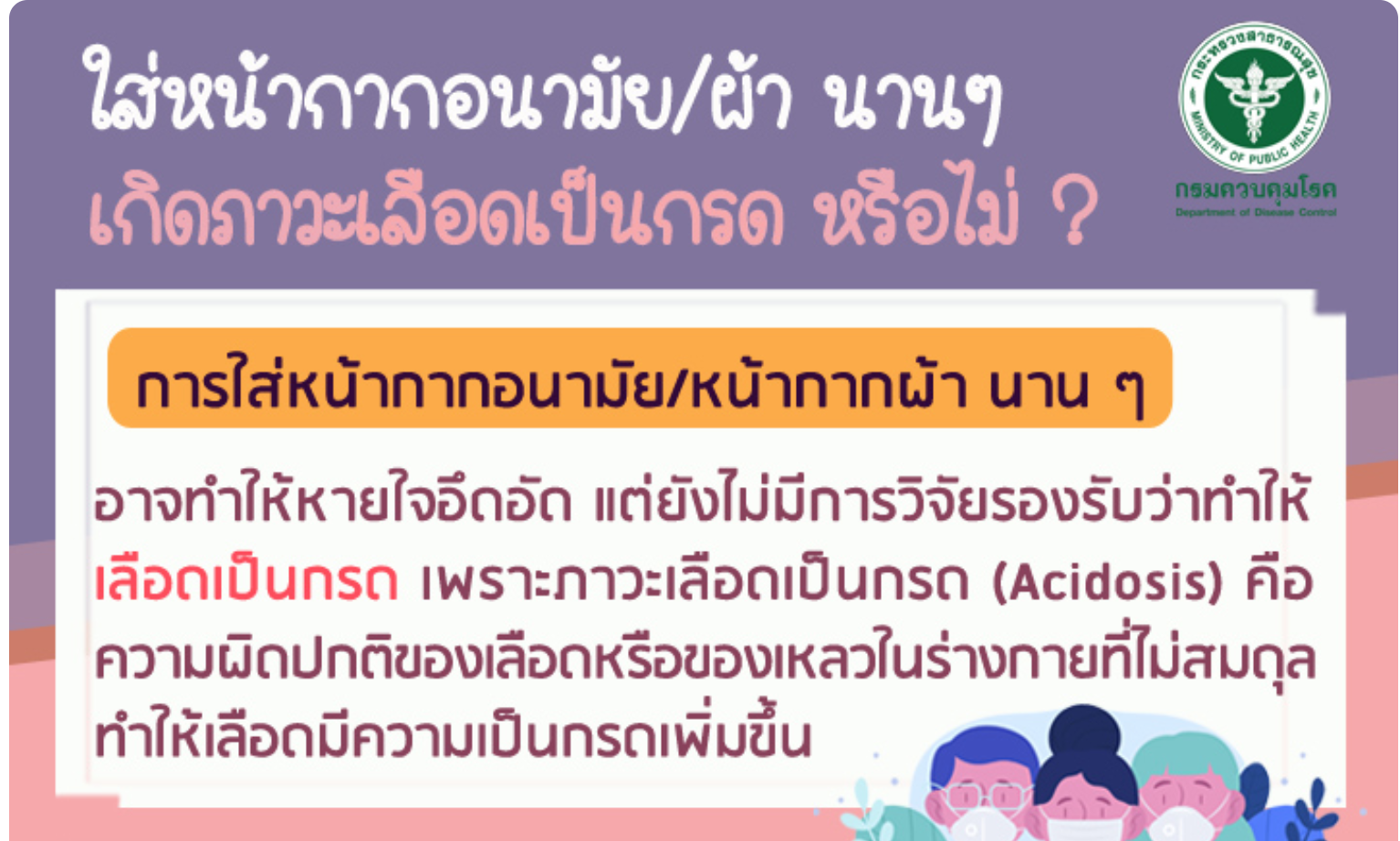 Screenshot of the infographic

The text in the infographic reads: "Does wearing a mask/fabric for a long time cause blood to turn to acid?"

"Wearing masks for a long time can cause shortness of breath. However, there are currently no studies which stated that it causes blood to turn into an acid, because the state where blood becomes acidic (Acidosis) is the abnormality of the blood or fluid that are imbalanced in our body."

Thonburi Hospital in Bangkok also refuted the claim on Twitter on March 7, 2020, saying that wear a face mask for an extended period of time does not cause blood to become acidic.

But the original image does not say that "wearing a mask continually" can cause hypercapnia.

Below is a screenshot comparison of the photo in the misleading post (L) and the original photo on WikiJournal (R):

Claim :   Prolonged use of face masks causes hypercapnia, a condition caused by a buildup of carbon dioxide in the blood.
Claimed By :  Facebook, Twitter, Instagram
Fact Check :  False
Coronavirus COVID-19 Coronavirus Vaccine COVID-19 Vaccine Hypercapnia FAKE NEWS FactCheck
If you value our work, we have an ask: Our journalists work with TruthSeekers like you to publish fact-checks, explainers, ground reports and media literacy content. Much of this work involves using investigative methods and forensic tools. Our work is resource-intensive, and we rely on our readers to fund our work. Support us so we can continue our work of decluttering the information landscape. BECOME A MEMBER
📧 Subscribe to our newsletter here. 📣You can also follow us on Twitter, Facebook, Instagram, Youtube, Linkedin and Google News