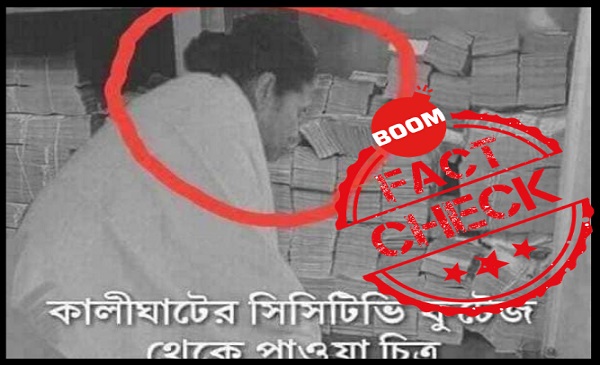 A black and white photograph of West Bengal Chief Minister Mamata Banerjee bending to take money from a locker filled with cash is being shared on Facebook with a text in Bengali which reads – 'Received from Kalighat's CCTV footage'. The photo has been colour toned to suit the CCTV footage photograph format. Incidentally, Kalighat is the Chief Minister's residence in South Kolkata.

On using reverse image search, we found out that the image of the locker, stacked with bundles of cash, is originally from Kolkata, where a Tamil businessman ran a fake lottery company and smuggled money to Dubai through the Hawala route. Money worth crores were recovered from six locations, reported the Hindu on September 24, 2015. It is clear that the West Bengal CM's picture has been photoshopped to make it appear that she has an almirah full of cash stored in her house.

Mamata Banerjee led Trinamool Congress has been under the scanner of the Central Bureau of Investigation for its alleged involvement in the Saradha chit fund scam. Last week Kolkata turned into a war zone, when the CBI officials came to question the Kolkata Commissioner of Police Rajeev Kumar, at his residence, on grounds of possessing crucial and significant information regarding the Saradha scam. The state police in turn, allegedly manhandled the CBI and detained them. In a sudden turn of events, Banerjee resorted to a four-day long dharna, from February 3, to protest the alleged questioning of Kumar without any warrant.

Meanwhile the CBI and State moved the Supreme Court simultaneously, who then directed a discussion between Kumar and the CBI officials in a 'much cooler' Shillong.

After the Saradha scam was busted, Banerjee constituted a special investigating team (SIT) comprising officers from West Bengal police to investigate the matter.Rajeev Kumar led the SIT. The Saradha scam is about Rs 25,000 crore. In both these cases, the ponzi companies duped the depositors and refused to return money after the amount 'matured' and finally closed down their operations. The Supreme Court handed over the probe to the CBI in 2014.

Claim :   CCTV footage showing Mamata Banerjee stealing money
Claimed By :  Facebook user Dipak Roy
Fact Check :  False
CCTV Footage featured Kalighat Mamata Banerjee Stealing Money TMC
If you value our work, we have an ask: Our journalists work with TruthSeekers like you to publish fact-checks, explainers, ground reports and media literacy content. Much of this work involves using investigative methods and forensic tools. Our work is resource-intensive, and we rely on our readers to fund our work. Support us so we can continue our work of decluttering the information landscape. BECOME A MEMBER
📧 Subscribe to our newsletter here. 📣You can also follow us on Twitter, Facebook, Instagram, Youtube, Linkedin and Google News 📝Stay updated with all our latest fact check stories.