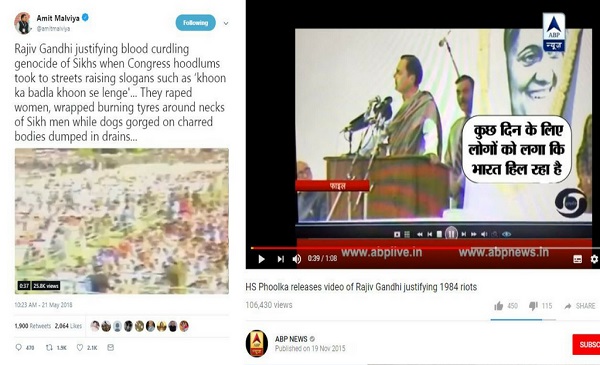 In a fresh account of the sharp social media battle between the BJP and the Congress, BJP’s social media head Amit Malviya shared a video of former Prime Minister Rajiv Gandhi's infamous statement in November 1984 justifying anti-Sikh riots. Malviya shared the video with a text calling out the Congress for the complicity of its leaders and workers in the horrific riots that took more than 3000 lives.

The riots often termed as a state-sponsored genocide following the brutal assassination of Prime Minister Indira Gandhi on October 31, 1984 by her Sikh bodyguards, had shook the collective conscience of the nation and put several Congress leaders like Sajjan Kumar, Jagdish Tytler and Kamal Nath under scanner over the last three decades.

Several Twitter handles disputed the video and said that the voice was not of Rajiv Gandhi.

This is not the original voice of Rajiv Gandhi. These are not the words either. Bad voice over job, recklessly tweeted by a master of disinformation. Would advise legal action https://t.co/lxPOs1yHmM

When BOOM searched for the same speech delivered by Rajiv Gandhi, we came across a video put out by the Indian Express Online on YouTube in 2015, in which the same part of the speech is audible if played from 51 seconds to 1 minute 33 seconds. Also, Rajiv Gandhi's voice becomes a bit squeaky when he says "humare desh me...." which is also audible in the video tweeted by Malviya.

At some places, we did find a sync lapse in the speech but nothing that points to any conclusive proof of fake audio being overlaid over the video. It is not uncommon for videos to face a lip-sync error and can happen either during creation, post-production or later processing of the video over the years.

While Malviya tweeted only a 45-second clip of the released video that serves his political interests, we found that Rajiv Gandhi did not stop there. He went on to say,

"But after that, from the way you put a stop to it, from the way India has been brought back to the path of unity with your help and strength, and is able to stand united again, the world can see that India has really become a genuine democracy.”

We also found a video posted by ABP News on YouTube dated 19th November, 2015. It was a clipping of a show which reported that the Rajiv Gandhi speech was released by AAP leader HS Phoolka.

In November 2015, AAP leader and senior advocate HS Phoolka and BJP Leader RP Singh had released the video during a press conference. HS Phoolka then said, "“A Prime Minister who justifies the killing of innocent citizens, definitely does not deserve Bharat Ratna. We therefore call upon the government to withdraw the Bharat Ratna conferred upon Rajiv Gandhi”.

BOOM spoke to Phoolka who requested that he be sent the tweet for him to verify if it has the same video that he had released. After seeing the video, Phoolka said to BOOM, "This is the same video that we had released in 2015. The Congress party has itself never disputed the video. Before releasing it to the media, we had verified if the video was original and not tampered with."

This is not the first time that the Congress has come under heavy attack from the opposition for Rajiv Gandhi's quote and its own role in the 1984 Sikh riots. In August 2016, the party's West Bengal social media handle had posted an inappropriate tweet referencing Rajiv Gandhi's controversial speech, according to The Quint. That handle no longer exists when we last checked Twitter.

Does @OfficeOfRG support this? pic.twitter.com/yRoYhEdR7p

It is unclear why BJP's Amit Malviya shared the over 3-decade video as no immediate context was available to share the video. BOOM spoke to senior journalist Hartosh Singh Bal who has written extensively about Congress' role in the 1984 Sikh riots and its failure to provide justice to those affected by it.

Bal said that while the Congress has to take full responsibility of the riots, the BJP has only paid lip service and done nothing to provide justice to the victims either during their earlier tenure under the Vajpayee regime or under the present 4-year term of Narendra Modi.

We also found Bal's tweet in 2015 that referenced an Hindustan Times article from 2002 mentioning the role of 49 RSS and BJP workers against whom 14 FIRs were filed on the recommendations of Jain-Agarwal committee which examined affidavits filed by activists before various commissions.

evidence for what RSS did in 1984, helped Cong & backed Rajiv in subsequent poll - hindutva https://t.co/VJT0yzQGe1 https://t.co/8gIBVzAoj9

When you click on the link shared in the tweet, it opens in another window and you can only see the screenshot of the Hindustan Times article claiming to be from 2002 which clearly mentions the involvement of the RSS and BJP cadres in the 1984 riots. 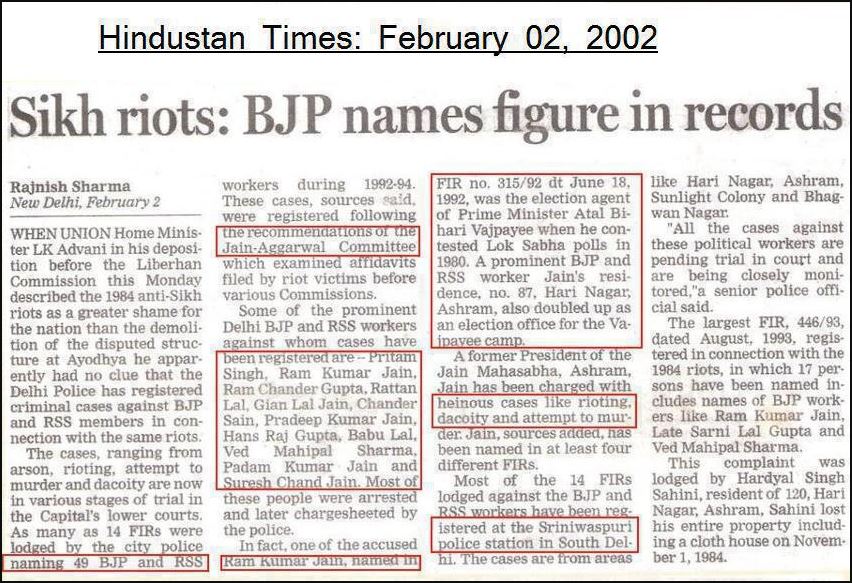 But when searched for the same article on Google with the same header and the date, we found a link to a page which had the same screenshot of the article and also had a link to the original article. But the page now shows a 404 error which indicates that the story has been taken down by the newspaper. 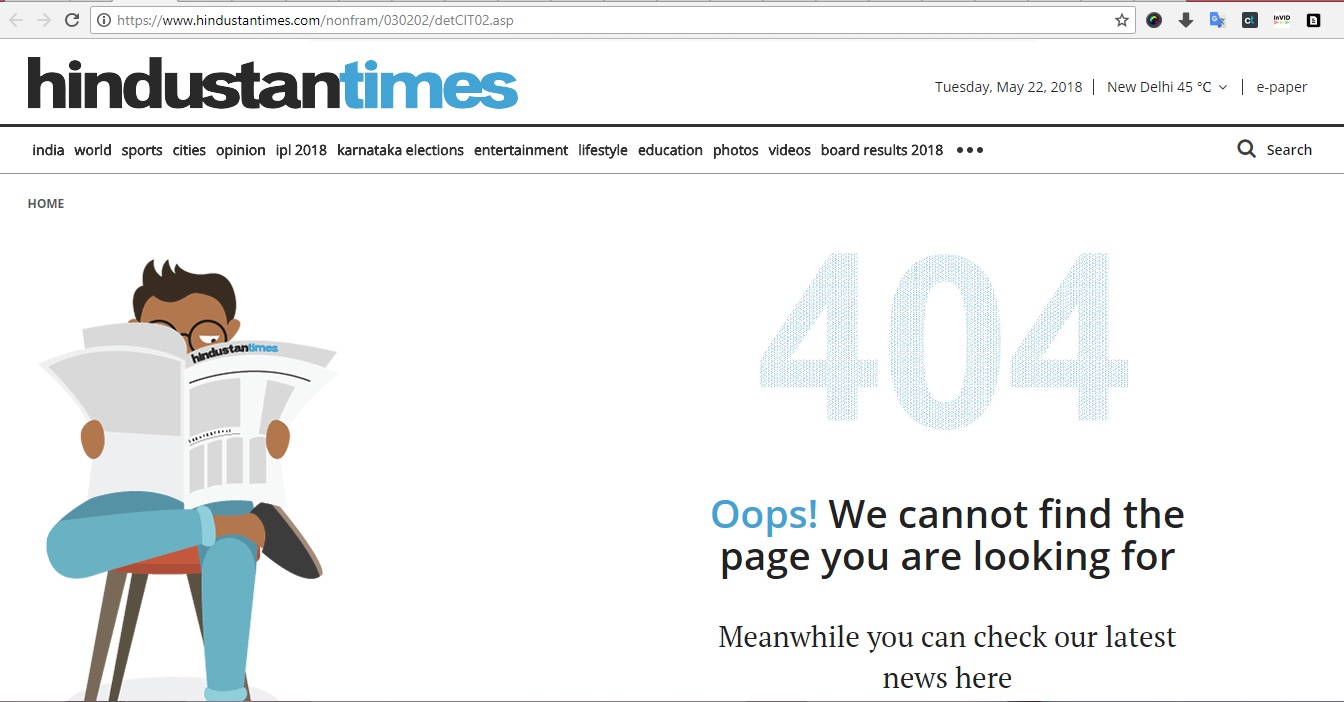 In an interview to the Scroll in 2015, Gautam Navlakha, a senior member of the Peoples Union for Democratic Rights who came out with a report 'Who are the guilty?' also talks extensively about the silence and in some cases active involvement of the RSS and BJP leaders during the riots in 1984.

"The Congress was playing upon the Hindu sentiment. It synced with the feelings of the RSS at that particular juncture. There was no difference of opinion between the Congress and the BJP on this count. It was later, for political reasons, the Sangh joined in [to accuse the Congress of fomenting the riots]."

Senior Congress leader and former Prime Minister Manmohan Singh has already apologised on several occasions including in Parliament in 2013 where he said, ""I have no hesitation in apologising to not only the Sikh Community but also to the nation. I bow my head in shame that such a thing happened," the Prime Minister said according to a report in Business Standard.

But at the same time, Rahul Gandhi who took over the Congress in 2017 has steadily avoided strong efforts by journalists and activists to convince him to offer an unconditional apology to the Sikh community for his party's role in the riots. In an interview to Times Now in January 2014 before the national elections, Gandhi while admitting that "some Congressmen were probably involved" chose to focus on the then Congress government's efforts to contain the riots. Sikh activists had taken to the streets to protest Gandhi's comments.

In September 2017, Gandhi again faced protests from several Sikh-Americans when he addressed a gathering at the University of California. Gandhi was asked about the 1984 riots and the quest for justice by the community to which Gandhi said, “I absolutely love the community. If there’s anything I can do to help them get justice. I’ll be the first person to do so.”

1984 genocide 1984 riots 1984 sikh riots AAP AS Phoolka BJP Congress featured Indira Gandhi Indira Gandhi Assassination Rajiv Gandhi Sikh riots
If you value our work, we have an ask: Our journalists work with TruthSeekers like you to publish fact-checks, explainers, ground reports and media literacy content. Much of this work involves using investigative methods and forensic tools. Our work is resource-intensive, and we rely on our readers to fund our work. Support us so we can continue our work of decluttering the information landscape. BECOME A MEMBER
📧 Subscribe to our newsletter here. 📣You can also follow us on Twitter, Facebook, Instagram, Youtube, Linkedin and Google News 📝Stay updated with all our latest fact check stories.