Assam police have flagged down a website for publishing a fake advertisement calling applicants to join the Territorial Army. The police who were informed of the fake listing by the Indian army, issued an advisory on Twitter with details of the fake advertisement and how it caused many aspirants to believe in it and turn up at the army grounds for tests.

The advertisement was uploaded on website called Gurugovt.in - a job listing site which regularly posts about government jobs. It carries the title TA Army Open Rally Bharti 2018 All zone latest recruitment schedule 2018-19 and has detailed listings of recruitment rallies to be held in various states by the Territorial Army. 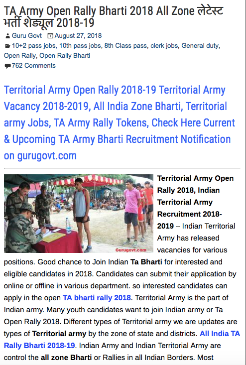 Screenshot of the website that carried the fake Ad

The Territorial army while a part of the Indian army, is a volunteer force that is called in relieve the troops of the armed forces and assist civil administration during natural calamities or other threat situations. It recruits civilians plus commissioned ex-servicemen into its fold.

Speaking to BOOM Harmeet Singh, Additional Director General of Police (Security), Assam said that the Indian army had reached out to the state police after the first advertisement on the website caused hundreds of aspirants to reach the Army grounds at Thakurbari village in Sonitpur district of Assam.

The advertisement on the website mentioned that from August 7-10 of this year, a recruitment rally would be held at the Thakurbari in Assam. This caused many people to gather at the army grounds in the village only to find no such recruitment rally being held. When the officials enquired with the aspirants they were told that many of them had seen an advertisement on a website called gurugovt.com, Singh said.

To prevent another situation where aspirants turned up at Kokrajhar, Assam police issued a statement to the media and carried it on their official Twitter account stating that the advertisements were fake. A senior police source told BOOM that fake advertisements could lead to law and order problems as many youngsters gather after reading that fake news for recruitment, this source explained.

BOOM checked the listing and found that to add authenticity to the post, the advertisement mentions a link to the territorial army website -https://www.territorialarmy.in/ . But a visit to the the site shows that a notification at the top of the screen notification for PIB for commissioning in the Territorial Army for the year 2018 is NOT yet published. It will be soon notified in due course through www.indianarmy.nic.in & www.joinindianarmy.nic.in, local newspapers and Employment News.

The website Gurugovt does not have a Contact Us or About Us page but a search of their domain registry shows that it is listed under the name of a Shivam Bhateja of Eminence Academy in Rajasthan. Speaking to BOOM, Bhateja denied owning the website and said he had handed over the operations to another person named Sandeep, six months ago.

When BOOM reached out to Sandeep, he initially denied it was a fake listing and explained that he only uploaded details from official government websites. He also had no clue about Assam police advisory and then said "the listing had been mistakenly uploaded on the site" and would be taken down.