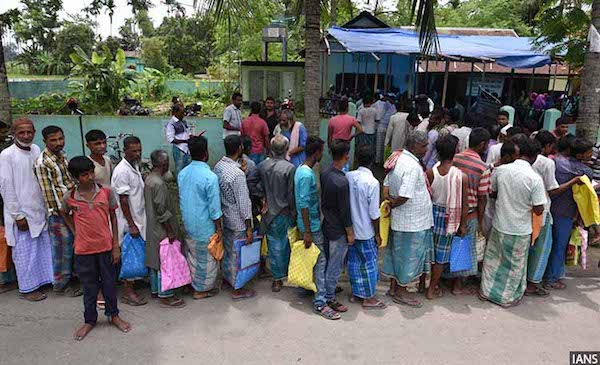 Guwahati: People queue up outside a NRC Seva Kendra in Nagaon to check their name on the first complete draft of the National Register of Citizens (NRC) that was published on July 30, 2018

Mumbai: A proposed amendment to India’s 63-year-old Citizenship Act and the definition of “illegal migrants” may hold the key to understand the unfolding confusion and turmoil over process of identifying citizens–officially, the National Register For Citizens (NRC)–in the northeastern state of Assam.

While the 2016 amendment–on hold after protests swept the northeast in July 2018–proposes a faster track to citizenship to migrants from six religions (except Islam) and three nations, the Indian definition of an illegal migrant appears to conflict with this amendment and some naturalisation provisions.

An “illegal migrant”, according to the Citizenship Act, 1955, means a foreigner who has entered India:

(i) without a valid passport or other travel documents or

(ii) with a valid passport or other travel documents but remains therein beyond the permitted period of time.

Articles 5-9 of the Indian constitution deal with citizenship. While Article 10 guarantees the continuance of citizenship, Article 11 grants Parliament the right to regulate citizenship.

“It is important to remember that the provision about citizenship will be scrutinised all over the world. They are watching what we are doing,” Sardar Vallabhbhai Patel, India’s first home minister, said in 1947 while participating in the constituent assembly debate on adopting the constitution.

R#8220;This is a simple problem. We must always have a few foreigners coming here. This will be accidental nationality – if by the accident of birth, some one comes and stays here, subject to the proviso which we have enacted, we can control double citizenship by our legislation. We can always control that,” Patel said.

“Every Indian has the same rights of citizenship, no matter in what state he resides.”

The Citizenship Act, 1955, defines how Indian citizenship can be acquired: Birth, descent, registration and naturalisation.

One of the requirements for citizenship by naturalisation is that the applicant must have resided in India over the last 12 months (before making the application), and 11 of the previous 14 years, according to this note by PRS Legislature, a think tank.

The Citizenship (Amendment) Bill, 2016 proposes to relax this 11-year requirement to six years for persons belonging to six religions and three countries.

A key amendment in the bill seeks to grant citizenship to people without valid documents from minority communities–Hindus, Sikhs, Buddhists, Jains, Parsis and Christians–from Afghanistan, Bangladesh and Pakistan after six years of residence in India.

Birth does not confer automatic citizenship in India

India offers citizenship on birth, after the 2003 amendments, if both parents are citizens of India or one parent is a citizen and the other is not an illegal migrant.

The United States offers citizenship if you are born there, irrespective of the status of the parents, while the United Kingdom offers citizenship based on birth, after 1983, only if one parent is a British citizen or is permitted to stay in the UK permanently.

The Citizenship Act, 1955 says that every person born in India

(b) on or after the 1st day of July, 1987, but before the commencement of the Citizenship

(i) both of his parents are citizens of India; or

shall be a citizen of India by birth.

Almost 4 million people in Assam have been left out of the NRC, sparking controversy over the process and documents needed to identify citizenship.

The Assam NRC is proceeding under the watch of the Supreme Court, which on July 31, 2018, said “the court would like to observe that what has been published being a draft NRC, it cannot be the basis for any action by any authority”, The Times of India reported on August 1, 2018.

“Of the 40.07 lakh, the applications of 37.59 lakh were rejected and those of 2.48 lakh put on hold,” state NRC coordinator Prateek Hajela told the SC.

How Assam differs from India

The NRC updation process in Assam differs from the rest of India by replacing house-to-house visits by applications from citizens and citizenship status based on NRC,1951 and electoral rolls till midnight of March 41, 1971. It is governed by Rule 4A and the corresponding schedule of the Citizenship (Registration of Citizens and Issue of National Identity Cards) Rules, 2003, said a statement issued by the office of the state coordinator, NRC, on July 30, 2018.

“These rules have been framed as per the cut-off date of 24th March (Midnight), 1971 decided as per Assam Accord,” the NRC statement said.

More than 32 million applications were made for citizenship, and about 30 million were found to eligible for inclusion in the NRC, the NRC statement added.

“Persons who do not find their names in Complete Draft NRC have the legal right to apply again by filing of claim during the period August 30, 2018 and September 28, 2018.”

The NRC had listed 14 documents that could be submitted as citizenship proof:

The Congress, which ran the Indian government when the Assam Accord was signed in 1985, said the process was riddled with problems.

Modi Govt's incompetence and tardiness in verification has left thousands of Indian citizens in jeopardy. Inspite of spending Rs 1200 crore over 5 years, why was the Modi Govt unable to publish an accurate NRC?

“You can’t link every Bengali speaking person to Bangladesh,” Information and Broadcasting Minister of Bangladesh Hasanul Haq was quoted as saying on August 1, 2018.

“Everyone knows it is a century-old ethnic conflict in the state of Assam,” said Haq. “In last 48 years, no Indian government has raised the issue of illegal immigration with Bangladesh; the situation needs to be dealt by the (Prime Minister Narendra) Modi government in New Delhi, which is capable of handling it judiciously. It has no relation to Bangladesh.”

The NRC process began after the 1985 Assam Accord, which said that all illegal foreigners who came to Assam after 1971 from Bangladesh, irrespective of religion, have to be deported, the Financial Express reported on July 31, 2018.

Controversy erupted and protests swept the northeast following the citizenship amendment bill, introduced in the Lok Sabha on July 19, 2016. Various groups in Assam and neighbouring states alleged that the new bill is contrary to the Assam Accord.

This article was first published on factchecker.in