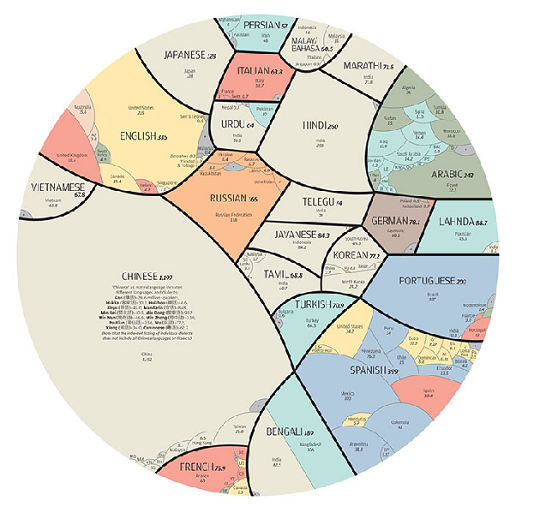 Last week we highlighted for you a beautiful Tree of Languages infographic, created by Minna Sundberg using data from ethnologue.com. This week, we present another visualization of world languages, this one produced by Alberto Lucas Lopéz, on behalf of the South China Morning Post. And, once again, the underlying data comes from ethnologue.com, a research project that catalogues all of the world's known living languages.

Today's graphic — click here to view it in a large format — takes the world's 23 most popular languages, and then gives you a visual sense of how many people actually speak those languages overall, and where geographically those languages are spoken. The more a language is spoken, the more space it gets in the visual.

When you view the original graphic, you'll note that Chinese speakers outnumber English speakers by a factor of four. And yet English is spoken in 110 countries, as compared to 33 for Chinese. And the number of people learning English worldwide dwarfs the number learning Mandarin.

As you look through Lopéz's visual, you'll want to keep one thing in mind: Although the 23 languages visualized above are collectively spoken by 4.1 billion people, there are at least another 6700 known languages alive in the world today. Someone has to cook up a proportional visualization of those. Any takers?

This article has been republished from Openculture.com.

4.1 Billion 6700 Languages Alive Arabic Chinese English French German Hindi Italian Japanese Marathi Open Culture Persian Spanish Telugu World's Popular Languages
If you value our work, we have an ask: Our journalists work with TruthSeekers like you to publish fact-checks, explainers, ground reports and media literacy content. Much of this work involves using investigative methods and forensic tools. Our work is resource-intensive, and we rely on our readers to fund our work. Support us so we can continue our work of decluttering the information landscape. BECOME A MEMBER
📧 Subscribe to our newsletter here. 📣You can also follow us on Twitter, Facebook, Instagram, Youtube, Linkedin and Google News