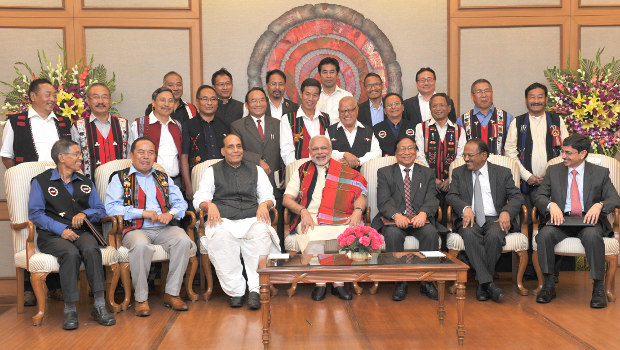 The Indian government's signing of the historic peace-accord with the separatist group NSCN(IM) is a reason to be cautiously optimistic. But with the North-East the most deadliest place for Indian security forces, only time will tell if the accord has brought change on the ground.

The fourth and latest peace agreement over 68 years was signed between the government of Prime Minister Narendra Modi and the National Socialist Council of Nagaland (Isak Muivah group), the state’s chief rebel outfit, on August 3, 2015.

The agreement–the details of which are not yet clear–could, hopefully, end India’s oldest insurgency and substantially restore peace in a troubled region. Also unclear are the reactions of rival factions, notably the NSCN (Khaplang), the outfit that ambushed and killed 18 Indian soldiers on June 4, 2015.

Modi, who was present during the signing of the peace agreement, lauded the courage and wisdom of the Naga leaders, and thanked them for their cooperation.

Here’s a look at earlier agreements signed by state and central governments and Naga rebels:

In June 1947, a Nine-Point Agreement was signed between Governor of Assam and Naga National Council (NNC).

Right of the Nagas to develop themselves according to their freely expressed wishes is recognised.

The agreement does not last, as the NNC interpret it as their right to complete the process of independence after the interim period of 10 years, while the Government of India insists that it only confers the right to suggest administrative changes within the country’s constitution.

In April 1956, The Indian government sends the army to crush the insurgency. Phizo escapes to (then) East Pakistan in December and, subsequently, in June 1960, to London.

In 1957, the Indian government accepts a proposal from the Naga People’s Convention (NPC), an organisation of Naga leaders, to merge Assam’s Tuensang Division with the Naga Hills district, now part of Nagaland.

The Naga leaders believe that Nagas inhabiting contiguous areas should be allowed to join the proposed new state. This is not acceptable to the Indian government at that stage.

In 1964, a ceasefire agreement is signed.

In 1975, the Shillong Accord is signed between the central government and Naga National Council (NNC).

According to this agreement, those representing the underground organisations (said to be close to the NNC) agreed to accept the Indian constitution and surrender arms.

It is agreed that representatives of underground organisations should have reasonable time to formulate other issues for discussion for final settlement.

NSCN (IM) had signed a ceasefire agreement with the government in 1997, which was extended indefinitely in July 2007.

The other factions of NSCN are NSCN (Khole-Kitovi), NSCN (Reformation) and NSCN (Khaplang). A ceasefire signed with NSCN/R & KK is valid till April 27, 2016.

However, insurgent incidents continue as the region is India’s original hot spot of insurgency, and the minority NSCN (Khaplang) faction has not agreed to the cease-fire.

Nagaland with 1,271 insurgent incidents over the past eight years is the third-deadliest north-east state after Manipur (3,812) and Assam (2,353), according to data released by Ministry of Home Affairs.

Two people are killed daily in the northeast

Arunachal Pradesh, Assam, Manipur, Meghalaya, Mizoram, Nagaland and Tripura, known as the ‘Seven Sisters’, has turned into a battle ground over the years. Assam constitutes nearly 54% of all civilian deaths in the north-east states.

Sikkim, also a part of India’s north-east region and the eighth north-eastern state, is free from terrorist activities.

On an average, nearly two people are killed every day: 569 lives (including-extremists, civilians and security forces) are lost each year in the north-eastern states.

No succour for deadly Manipur

Manipur is the deadliest north-eastern state with about 15 violent outfits representingdifferent tribes and communities.

About 1,192 extremists have been killed and over 11,000 arrested over the past eight years.

The Indian army’s 21 Para unit carried out a secret cross-border operation along the Indo-Myanmar border on June 9 to avenge the killing of 18 Indian soldiers by terrorists. About 20 militants were reported to be killed.

These militants were believed to be a mixed group of Meitei militants, led by the Kanglei Yawol Kanna Lup (KYKL) faction, while intelligence agencies point to the Khaplang faction of the NSCN as the main player.

The north-east is also the deadliest place for Indian security forces in 2015, IndiaSpend hadreported earlier. Over 300 army and paramilitary soldiers and police officers have been killed over the past eight years.

Despite accords and ceasefire agreements, insurgency continued in these areas. Even after the 1997 ceasefire between NSCN (IM) and the government, there have been several insurgent attacks. ■

Modi government Naga-separatist movement Nagaland North East NSCN(IM)
If you value our work, we have an ask: Our journalists work with TruthSeekers like you to publish fact-checks, explainers, ground reports and media literacy content. Much of this work involves using investigative methods and forensic tools. Our work is resource-intensive, and we rely on our readers to fund our work. Support us so we can continue our work of decluttering the information landscape. BECOME A MEMBER
📧 Subscribe to our newsletter here. 📣You can also follow us on Twitter, Facebook, Instagram, Youtube, Linkedin and Google News