The ongoing tussle between the North and the South over the Terms of Reference (ToRs) issued by the Centre to the NK Singh-led 15th Finance Commission has let loose the stark complexities that mar India’s political economy. While the notion that the interests of the South have often been placed on the altar of fiscal federalism has often resonated in the past, a collective chorus of political leadership that has now risen is worrisome. As media houses and expert voices continue to debate, and even inflate the matter beyond proportions, a sharp analysis of the devolutionary process suggests that the entire saga over the supposed “population-based formula” lacks a technical merit.

The Terms of Reference issued to the newly-appointed Finance Commission seeks a departure from the conventional use of the 1971 census data. The Centre has asked the Commission to use the 2011 data instead while making its recommendations. This has not gone down well with the political community in the south, which has alleged that such a revision would amount to penalizing the states in the region that have done remarkably well to contain their population.

The Jana Sena Party chief Pawan Kalyan was the first to stir the pot earlier this year when he took to Twitter against the “population based formula.” Since then many political bigwigs in the region have voiced their disapproval of the proposed formula that decides the share of each state in the Union Government’s tax kitty. While DMK leader MK Stalin called it a “travesty of justice”, Karnataka CM Siddaramiah claimed on Twitter that the move “would further affect the interests of the South”. Kerala’s Finance Minister, Thomas Isaac, had also organised a meeting of the finance ministers of the southern states on April 10. While finance ministers of Tamil Nadu and Telengana skipped the meeting, their counterparts from Kerala, Karnataka and Andhra Pradesh met and hit out against the BJP-led central government on the terms of reference of the 15th Finance Commission.

The argument that the South is making entails the notion that population plays an overwhelming, if not significant, role in determining a state’s share of Union tax revenue. In essence, it implies that the states with larger populations will end up benefitting from the move at the expense of those states that have effectively controlled their populations.

The use of 1971 census data was frozen in 1976 through a constitutional amendment to incentivize states that do well to contain their population growth. While the rate of population growth in the south have declined over the last 4 decades, the trend in the country’s north is not so impressive. 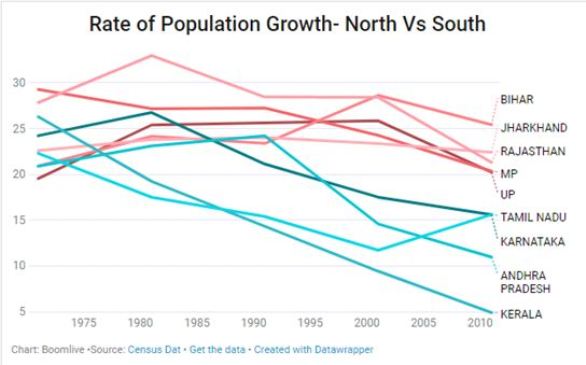 The problem with the argument:

The problem with such an argument is twofold- firstly, it assumes that population is the ultimate determinant of the state’s share in the Centre’s tax pool. Secondly; it appears to ignore the fact that other factors could play a vital role in setting up a balanced devolution formula.

That the richer south receives lesser funds from the centre is a fact, and it could be debated whether or not the allocation is just. But is it the population criterion in the formula that impedes southern interests? To answer this, one needs to closely examine the formula through which the Commission allocates the shares and the factors that constitute the equation.

Different commissions have used different formulas, along with different compositions in the past. The commission decides which factors would constitute the formula, and what weights are to be assigned to each of them. The last Finance Commission, for instance, had scrapped Fiscal Discipline from its set of criteria while introducing Forest Cover as a parameter for the first time.

The factors used by the 14th Commission along with their weights are as follows:

(iv) Income distance(fiscal capacity) with a weight of 50%;

The 14th Finance Commission was the first to use the 2011 population data, to which it assigned a weightage of 10%. Hence, altogether the Commission assigned 27.5% weight to population as compared to 25% assigned by its predecessor. Source: Reports of the 13th and 14th Finance Commissions

While population carried the most significant weight in the allocation-formulas employed by the first seven Commissions (80% - 90%), the 8th Finance Commission sharply reduced its weight to 22.5%. Since then successive commissions have kept it under 28%.

On the other hand, fiscal capacity (income distance) has been the crucial factor that the last two finance commissions have used in their computations. While the 13th Finance Commission assigned Income Distance a weight of 47.5%, the previous body increased it to 50%.

A state’s income distance is the difference between its per capita income and that of the state with the highest per capita income. This implies that the lower the per capita income of a state, the higher is its income distance. In other words, it is the significantly high weightage assigned to Income Distance in the formula that ensures that the poorer states get the most. Population is not the guiding factor in the horizontal devolution of the Centre’s tax pool. Maharashtra, with the second largest population after Uttar Pradesh (both as per 1971 census data as well as 2011 data), serves as a strong demonstration of this fact.

The chart below plots the population share (2011 census data), share in taxes and the per capita income of each state.

If one were to consider the return for a state with respect to what it contributes to the union tax kitty, poorer states stand to gain. Karanataka’s Cheif Minister Siddaramiah had raked this issue up last month in a Facebook post; days after UP CM Yogi Adityanath had paraded the poll-bound state. In a sharp attack against the devolution scheme, Siddaramiah pointed out that “for every one rupee of tax contributed by Uttar Pradesh that state receives rupee 1.79. For every one rupee of tax contributed by Karnataka, the state receives 0.47 rupee.”

“While I recognize the need for correcting regional imbalances, where is the reward for development? The states of the South have nearly reached replacement levels of population growth. Yet, population is a prominent criteria for devolution of central taxes. For how long can we keep incentivizing population growth?” he asked.

Again, Siddaramiah’s argument hangs its coat on the presumption that population is a prominent criterion. If one were to look on the lines of how much a state gets relative to its contribution, Maharashtra (despite being the second largest populated state) is the worst hit in the devolution process- much worse than its southern counterparts. For every Rupee, the State gets back only 0.15 paisa as its share in the devolved resources. (For Bihar, the return is a mammoth Rs 4.2).

Therefore while population is one of the factors used in the devolution formula, it doesn’t decide “who gets what”. Updating the base year will not necessarily reduce the south’s share as long as the other factors play a balancing act. The Finance Ministry has already responded to the states’ concern, pointing out that the Terms of Reference also asks the Commission to take into account the efforts made by the states in moving toward population replacement levels (which amounts to a Total Fertility Rate of 2.1).

“The Terms of Reference of the 15th Finance Commission makes two specific references to the population kind of issue. One, it states very clearly that wherever any year is to be used for the purpose of population, it will be 2011. There is another specific reference in the Terms of Reference which says that while drawing an incentive program for incentivising the states, the Finance Commission will take into account the progress of the states towards replacement level of population. So that second reference is intended to encourage and incentivise the states which have done well on population control,” said Subhash Chandra Garg, Secretary of the Department of Economic Affairs, the Ministry of Finance.

Finance Minister Arun Jaitley also responded to the allegations through a Facebook post on Tuesday. Jaitley said that "A needless controversy is sought to be created that the Terms of Reference (ToR) of the 15th Finance Commission are loaded against any particular region of the country. Nothing could be further from truth." The finance minister went on to say, "The ToRs of 15th FC rightly balance both the ‘needs’ represented by latest population and “progress towards population control” very well. There is no inherent bias or mandate in the ToRs of the 15th FC which can be construed as discriminatory against the States which made good progress in population control."

The inclusion of the incentivizing factor will ostensibly iron out the impact of the base year’s revision. Persisting with the 1971 census data defies the purpose of the population parameter in the devolution formula. The population criterion in the equation serves as a proxy for a state’s needs, and the massive demographic changes that have taken place since 1971 calls for an update in the base year.