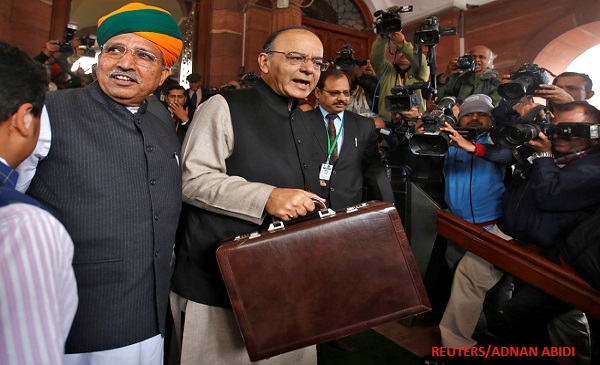 The Narendra Modi government's fourth Union Budget has come up with a new slogan: Transform, Energise and Clean India. i.e Tech India. Giving a huge push to rural India with allocations to various existing schemes across housing, MNREGA and agriculture, finance minister Arun Jaitley resisted from the temptation of announcing populist measures with an eye to keep the fiscal deficit at 3.2% of the GDP in FY17.

Here are 10 key proposals that affect the common man across rural and urban India.

Surcharge of 10% introduced for those with annual income between Rs 50 lakh to Rs 1 crore.

Cash transactions above Rs 3 lakh banned in line with the recommendations of the special investigative team (SIT) on black money.

Service Tax abolished on railway tickets booked through IRCTC. Currently, IRCTC charges Rs 40 on every ticket booked in air-conditioned classes. For sleeper class, a service charge of Rs 20 is levied by IRCTC when ticket is booked through its website.

4) Boost to Urban and Rural Housing

Holding period for levy of Long Term Capital Gains tax on immovable property reduced to 2 years from the current 3 years. Also the base year indexation has been shifted from 1.4.1981 to 1.4.2001.

Income tax reduced to 25% with turnover upto Rs 50 crore. This is expected to benefit 95% of the companies in the country with a ripple down impact on jobs with the MSME sector being the largest collective employer in the country.

LIC will provide a pension scheme with guaranteed return of 8 per cent for 10 years, as part of government’s social security and financial inclusion programme.

The finance minister has raised excise duty on cigarettes by 6% across all lengths.

Finance Minister Arun Jaitley said that the government plans to bring in a Aadhaar-based payment system to promote digital transactions for people living outside urban areas. "A merchant enabled Aadhaar payment system will be launched shortly. This will specially be beneficial to those who do not have debit cards, mobile wallets or mobile phones," Jaitley said.

Goverment will also introduce two new schemes to promote BHIM App - referal bonus for users and cash back for traders.

9) Medical devices to get cheaper

Medical devices are all set to get cheaper with the finance minister saying that the government will amend the Drugs and Cosmetics Rules to ensure availability of medicines at reasonable prices and also formulate new norms for the medical devices sector to bring in investments.

"We propose to amend the Drugs and Cosmetic Rules to ensure availability of drugs at reasonable prices to ensure use of generic medicines. New rules regarding medical devices will be formulated. These rules will be internationally harmonised and attract investments into this sector. This will reduce the cost of such devices," Finance Minister Arun Jaitley said.

10) No passenger fare hikes on Railways

This is the first time in Indian Budget history that the railway budget proposals were merged with the Union Budget. Despite huge capital expenditure of Rs 1.31 lakh crore, the government has stayed away from hiking passenger fares.

Arun Jaitley Budget 2017 GDP Income Tax MSME pension scheme senior citizens
If you value our work, we have an ask: Our journalists work with TruthSeekers like you to publish fact-checks, explainers, ground reports and media literacy content. Much of this work involves using investigative methods and forensic tools. Our work is resource-intensive, and we rely on our readers to fund our work. Support us so we can continue our work of decluttering the information landscape. BECOME A MEMBER
📧 Subscribe to our newsletter here. 📣You can also follow us on Twitter, Facebook, Instagram, Youtube, Linkedin and Google News