An image has been shared hundreds of times in multiple Facebook and Instagram posts that claim it shows bacteria growth that was collected from a face mask after a person wore it for just 20 minutes. The claim is misleading; microbiologists told AFP that the growth seen in the petri dish had likely "been incubating for a long time" and shows other microbes, not just bacteria from a face mask.

The image features text which reads: "A nurse posted this to Instagram. This is bacteria grown in a petrified [sic] using a swab taken from inside a mask after only 20 minutes of use….." 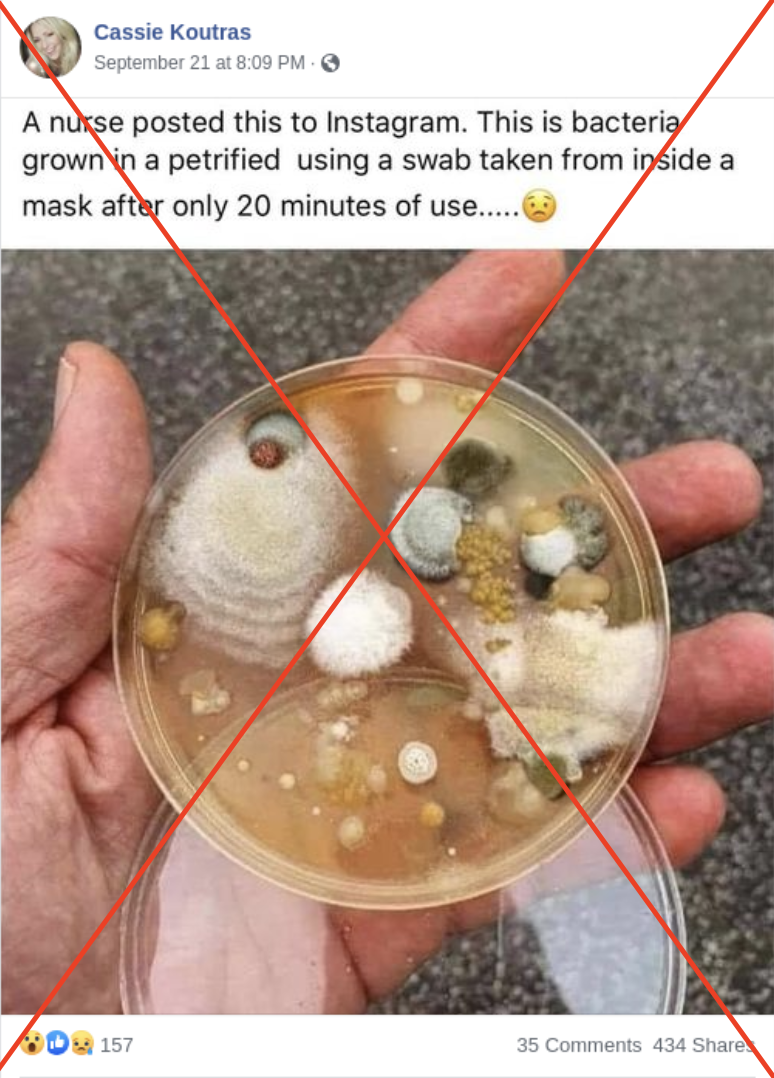 The claim, however, is misleading, according to microbiologists.

Emad El-Omar, a professor of medicine at UNSW Australia's St George and Sutherland Clinical School, said the image in the post is "sensationalist and misleading in that this is a heavily contaminated and old dish that has been growing for quite a while."

"The petri dish image shows a heavy growth of fungi, not just bacteria! This is most likely because the dish has been incubating for a long time and is contaminated by mould (or mold) spores from the air, etc," El-Omar, who is also the director of the Microbiome Research Centre, explained in an email on September 25, 2020.

Dr Richard E. Davis, regional director of microbiology at the Providence Sacred Heart Medical Center in the US state of Washington, also said the post was "definitely misleading".

"Bacteria and fungi are shown, not just bacteria," he said in an email to AFP on October 5. "The image in this picture shows a culture plate that is overgrown with colonies of bacteria, and large patches of fungus (the "fuzzy" colonies in the picture) as well. The colony sizes of the different bacteria and fungus types makes it clear that this plate has been grown for a long period of time which makes the image more dramatic."

Davis added that it was unlikely that the microbes shown in the photo would cause disease.

"The clear implication of the image is that by wearing a mask you are exposing yourself to disease-causing microbes," he said. "None of the microbes in the image identified as those known to cause disease. The number of fungal colonies is suspicious as well: fungi that produce spores and grow like this are not a major part of your normal mouth or throat microbes."

AFP was unable to locate the original source of the image.