Social media posts claim tweets from the Israeli prime minister's official Twitter account indicate the country was responsible for a massive explosion that devastated Beirut. But the tweets -- which were sent well before the blast in Lebanon -- actually referred to strikes in Syria the day before.

"#Israel's PM #Netanyahu just admitted the bombing of #Beirut was #IDF and an act of terror by the State of Israel," says an August 4, 2020 Facebook post, which includes an image of tweets from @IsraeliPM.

One tweet quotes Benjamin Netanyahu as saying: "We hit a cell and now we hit the dispatchers. We will do what is necessary in order to defend ourselves. I suggest to all of them, including Hezbollah, to consider this."

"These are not vain words; they have the weight of the State of Israel and the IDF behind them and this should be taken seriously," the premier said, according to the other tweet. 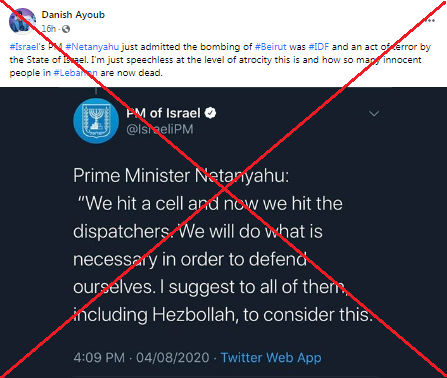 The August 4 blast at Beirut's port -- which appears to have been caused by a fire igniting 2,750 tons of ammonium nitrate left unsecured in a warehouse -- killed more than 100 people and left thousands wounded.

Israel and Lebanon are still technically at war, and tensions with the powerful Lebanese Shiite movement Hezbollah have recently spiked.

However, the tweets quoting Netanyahu -- which were sent hours before the Beirut explosion -- were not referring to Lebanon, but strikes in southern Syria on August 3. The Israeli military said they were in retaliation for an attempt to lay explosives in the Golan Heights, which it has occupied since 1967.

Claim :   Israels Prime Minister Benjamin Netanyahu claimed responsibility of the Beirut blasts on Twitter.
Claimed By :  Posts on Facebook, Twitter and Instagram
Fact Check :  False
Beirut Beirut Blast Israel Benjamin Netanyahu Beirut before and after Beirut blast death count beriut lebanon explosion beirut blast before and after Beirut Lebanon Blast Beirut blast causes Beirut death toll Beirut blast death Ammonium Nitrate Ammonium
If you value our work, we have an ask: Our journalists work with TruthSeekers like you to publish fact-checks, explainers, ground reports and media literacy content. Much of this work involves using investigative methods and forensic tools. Our work is resource-intensive, and we rely on our readers to fund our work. Support us so we can continue our work of decluttering the information landscape. BECOME A MEMBER
📧 Subscribe to our newsletter here. 📣You can also follow us on Twitter, Facebook, Instagram, Youtube, Linkedin and Google News