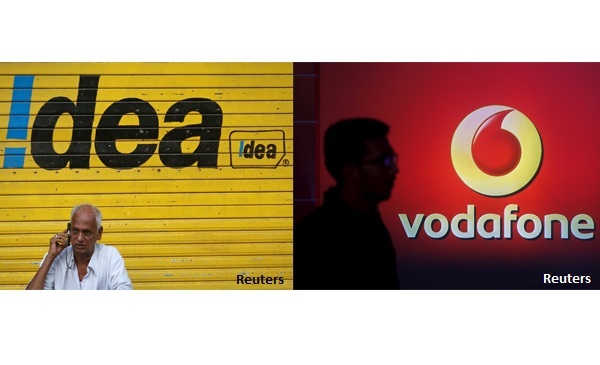 Britain’s Vodafone Group Plc and Idea Cellular said on Monday they would merge their India operations to create the country’s largest telecom operator in their bid to counter Mukesh Ambani’s Reliance Jio.

The new yet to be named entity would also have 35 percent market share and 41 percent revenue share, Vodafone said.

Idea’s stock price rose as much as 15 percent to 123.75 rupees on the Bombay Stock Exchange when the initial announcement was made but quickly gave up all its gains over concerns about undervaluing the business.

The merger comes on the back of Sunil Mittal-led Bharti Airtel’s deal last month to buy the Indian business of Norway-based Telenor.

Once considered as an incumbent’s game, India’s telecom sector has been roiled by the entry of Reliance Jio Infocomm's 4G mobile broadband network last year, bankrolled by Mukesh Ambani, the country’s richest man.

With $25 billion ploughed in a pan-India 4G rollout, providing voice calls for free and undercutting data tariffs of its rivals, Jio’s aggressive pricing strategy of has eroded margins in the sector.

The company’s assault on the market saw it gain 100 million users in just 170 days.

Vodafone will own 45.1 percent of the combined entity, after it transfers about 4.9 percent to promoters of Idea for about 39 billion rupees in cash.

The Aditya Birla Group will own 26 percent of the combined company and will have the right to buy more shares from Vodafone with a view to equalising its shareholding over time.

Vodafone will appoint a chief financial officer while the two companies will together choose a chief executive officer.

The deal is expected to generate synergies of 670 billion rupees after integration costs and other payments.

The deal excludes Vodafone's 42 percent stake in Indus Towers, a joint venture between itself, a unit of Bharti Airtel and Idea. Both Vodafone and Idea intend to sell their stakes in their tower assets.

The transaction is expected to close during calendar year 2018, subject to regulatory approvals.

The deal is a landmark deal for London-listed Vodafone. It has had a tumultuous ride since it entered India in 2007 through the acquisition of a majority stake in Hutchison Essar, which it later outright acquired.

The company has been embroiled in a long standing tax dispute of over $2 billion that remains the subject of international arbitration.

Vodafone India contributes more than 10 percent of its overall revenue.

But as Jio grabbed more market share Vodafone was forced to take a $5 billion impairment on its India business last year.

Idea Jio Mukesh Ambani Norway Reliance Sunil Mittal Telenor Vodafone vodafone plc
If you value our work, we have an ask: Our journalists work with TruthSeekers like you to publish fact-checks, explainers, ground reports and media literacy content. Much of this work involves using investigative methods and forensic tools. Our work is resource-intensive, and we rely on our readers to fund our work. Support us so we can continue our work of decluttering the information landscape. BECOME A MEMBER
📧 Subscribe to our newsletter here. 📣You can also follow us on Twitter, Facebook, Instagram, Youtube, Linkedin and Google News