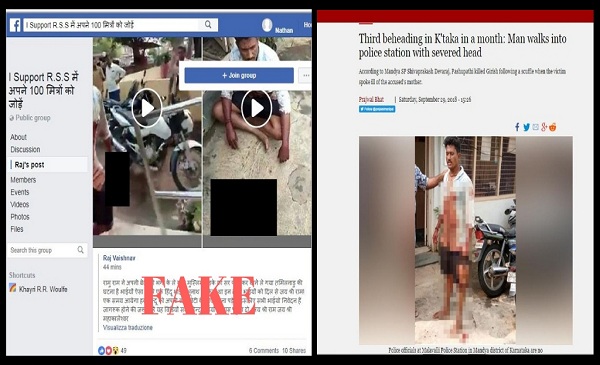 Two gory videos showing a man carry a severed head to a police station in Karnataka is being shared on Facebook with a false narrative that a Hindu man beheaded a Muslim for eloping with his daughter, in Tamil Nadu.

The shocking surrender captured on video happened on September 29, 2018 in Karnataka's Mandya district where a quarrel between two men turned violent after one of them allegedly said something disrespectful about the other's mother. Both victim and attacker belong to the Lingayat community, local police have told BOOM. News reports state it is the third beheading in a month (September) in Karnataka. The incident was widely reported last week. (Read here, here and here)

A Facebook group called “I Support R.S.S में अपने 100 मित्रों को जोड़ें” (Rashtriya Swamyamsevak Sangh ) posted the video on October 2, 2018 with a Hindi caption that lauded the actions of the attacker. While the post is now deleted an archived version of it can be accessed here. BOOM has chosen not to embed the videos in this story. 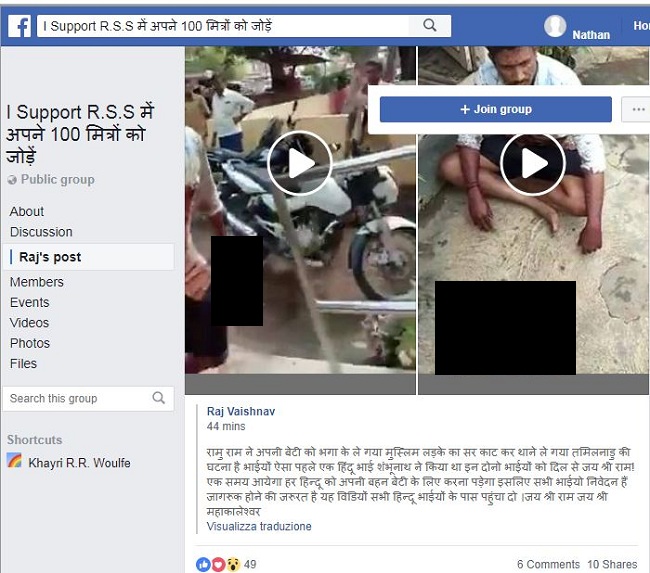 The text of the post loosely translates as 'Ramu Ram beheaded the Muslim youth who had eloped with his daughter. The incident is from Tamil Nadu, brothers. Earlier, a Hindu brother Shambhunath (Shambhulal Regar) had done the same. For both of them, a hearty Jai Shree Ram! A day will come when every Hindu will have to do this for their sisters and daughters. Thus, we request you brothers to be alert and share this video with other Hindu brethren. Jai Shree Ram! Jai Shree Mahakaleshwar!

The post also refers to Shambhulal Regar from Rajasthan who is currently in prison for hacking a Muslim labourer to death in Rajasthan's Rajsamand in December 2017.

The two-part video shows a man wearing a blood-sprayed shirt carrying a severed head into a police station following which he sits at the entrance of the chowki and talks to police personnel in Kannada.

BOOM was able to check the name of police station from the sign board visible in the video and found that it is the Malavalli Town police station in Mandya district in Karnataka.

BOOM also contacted Shiva Prakash Devaraju, Superintendent of Police (SP), Mandya district, who confirmed that the incident does not have any religious angle.

“The accused who is seen carrying the severed head is Pashupati and the victim is Girish," Devaraju told BOOM.

"Both of them were from the Lingayat community and were friends and had got into a fight three days before the incident. Girish had allegedly said spoken ill about Pashupati’s mother which angered him. On the day of the incident, Pashupati took him out for coffee and then beheaded him with an axe and then rode to the Malavalli town police station on a bike."

“He walked into the police station with the severed head and surrendered. We arrested him after getting all the details,” the SP said.

Claim Review :   A Hindu Man Beheaded A Muslim Youth Who Had Eloped With His Daughter In Tamil Nadu
Claimed By :  Social Media
Fact Check :  FALSE
beheaded Beheading Facebook fake news featured Hindu Karnataka Muslims
If you value our work, we have an ask: Our journalists work with TruthSeekers like you to publish fact-checks, explainers, ground reports and media literacy content. Much of this work involves using investigative methods and forensic tools. Our work is resource-intensive, and we rely on our readers to fund our work. Support us so we can continue our work of decluttering the information landscape. BECOME A MEMBER
📧 Subscribe to our newsletter here. 📣You can also follow us on Twitter, Facebook, Instagram, Youtube, Linkedin and Google News 📝Stay updated with all our latest fact check stories.