Images and videos of a man's body suspended from a bridge are being shared to claim that the loco-pilot in the Amritsar train accident committed suicide. However, neither has the loco-pilot committed suicide nor are these images related to the accident. Dussehra celebrations at Dhobi Ghat, Amritsar turned into a tragedy on October 19, when a speeding train ran over people who were standing on the tracks watching the burning of Ravana's effigy. Around 61 people lost their lives and 72 were injured in the accident. The images of the suicide case are being shared along with the loco-pilot's statement on the train accident. Several media reports have quoted Amritsar Police Commissioner S Srivastava who has clarified that the rumours about the driver committing suicide are false.

The driver of the DMU train Arvind Kumar has NOT committed suicide said Police commissioner Amritsar S. Srivastava. The following is the statement he gave to the railway authorities, not a suicide note: pic.twitter.com/lbi3scfB2p � Chitleen K Sethi (@ChitleenKSethi) October 22, 2018

Twitter handle @Golem001 shared these images and despite being called out by other users posted another video of a police officer inspecting the suicide site. 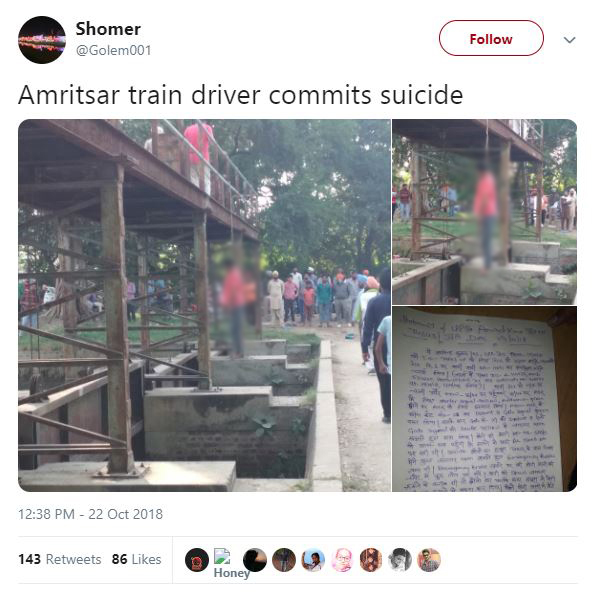 Now, several Twitter users and Facebook pages have shared these images with the incorrect information that the loco-pilot has committed suicide. BOOM has confirmation that the deceased is not the driver of the train but a man identified as Harpal Singh, resident of Bhikhiwind in Tarn Taran district of Punjab. Singh committed suicide on October 20 in Bohru village, Amritsar district.
Speaking to BOOM, Rashpal Singh, assistant sub-inspector, Bohru police station said that the deceased Singh had been depressed for a long time. "He was an electrician by profession but for the last four years he was unemployed. He had also been receiving treatment for seizures he would get owing to a mental illness," Singh said. He added that the deceased had tried to commit suicide several times over the last two years but had been rescued by family and friends. "On the day of the incident, Singh left home on his bike to Bohru and stopped near a barrage and then killed himself." He further explained that the family members of the deceased were being harassed after videos and photos of their son went viral with a message that he was the driver of the train in the recent Amitsar tragedy. "The family has called us seeking help after people started sending them threat messages and calls. We would like to request social media users to not spread such rumours. The deceased in the video is not the train driver of the Amritsar train tragedy but a local man from Bohru who was unemployed for many years."
The letter shared along with the images is the statement of Arvind Kumar, the loco-pilot. Kumar said that he blew the horn and applied the emergency brakes but did not stop as people were pelting stones at the train.

Saw a crowd of ppl around track. Immediately applied emergency brakes while continuously blowing horn. Still some ppl came under it.Train was about to stop when people started pelting stones & so I started the train for passengers' safety: DMU train's driver.#AmritsarTrainAccident pic.twitter.com/2dihtcO9Ri

However, witnesses of the incident have contested Kumar's statement claiming that the train did not slow down and no stone pelting took place. Dr Navjot Kaur Sidhu, former MLA and wife of Punjab Minister Navjot Singh Sidhu, had attended the event before the mishap. The state's opposition party, Shiromani Akali Dal have demanded the resignation of the minister and registration of murder case against the organizers and Kaur.