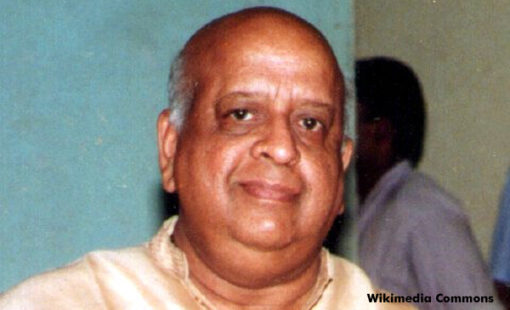 Viral fake messages on social media claimed a new victim today - former Chief Election Commissioner T N Seshan. Several messages on Twitter and WhatsApp claimed that the former firebrand EC who redefined the role of the election commission in the nineties has passed away in Chennai.

Ex Chief Election Commissioner Sri. TN Seshan, the once nightmare of many political parties passed away.

A real divine couple. They had no children and since long they lived in an old aged home nr Chennai

Ex CEC Sri. T.N.Seshan, once nightmare of many political parties passed away this morning. Tragic thing is , Yesterday his wife had passed away.

A real divine couple. As they had no children , simply they lived in an old age home.

The news of his death also went viral on WhatsApp 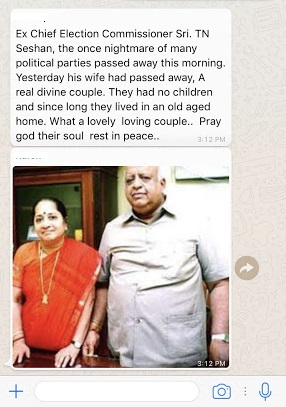 But several users on Twitter including former CEC Dr S Y Quraishi disputed the news and said that it was not Seshan, but his wife Jayalakshmi Seshan who passed away on March 31.

Shri T. N. Seshan Ex Chief Election Commissioner lost his wife on 31st March. He is doing well and continues to live in his house on St.Marys road in Chennai... Pray he lives long and healthy.

Sad to know about the passing on of Mrs TN Seshan two days ago. My heartfelt condolences to Sh Seshan. Relieved to know that rumours about him are false.

BOOM called up the Chennai residence number of TN Seshan and a relative confirmed that the news was a hoax and that he was fine.

T N Seshan who served as the Chief Election Commissioner between 1990 to 1996 is widely credited for taking crucial steps to clean up the election process forcing political parties to toe the line. During his term, he cracked down on election malpractices, forced the issuance of voting ID cards, setting limits for poll expenditure and disqualifying candidates irrespective of their stature, if they didn't meet the EC regulations.

During his period of service, the EC found its footing as an impartial election regulator focused only in the interest of the country's voters and the preservation of democracy through free and fair election process. He won the prestigious Ramon Magsaysay Award for government service in 1996.