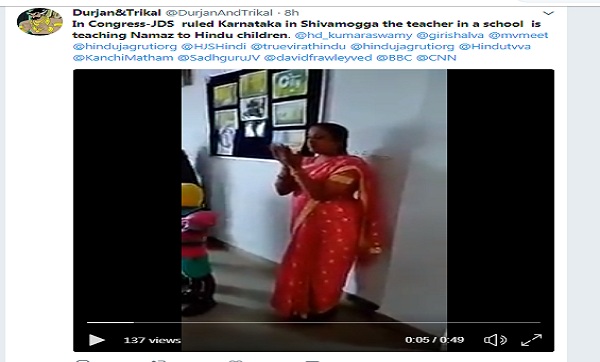 A video showing school children being taught verses from the Quran at a school in Shivamogga, Karnataka is in fact only one video in a two-part clip where the second video shows the same students being taught Sanskrit Shlokas from the Bhagavad Gita.

The video has been viral on social media since the past week. The clip has been shared with a misleading an incomplete narrative that Hindu students are being taught how to say Namaz or Islamic prayers.

The video has been shared on Facebook and Twitter with the message that states, "In Congress-JDS ruled Karnataka in Shivamogga the teacher in a school is teaching Namaz to Hindu children. If the Gita had been taught in any Madrasah, the whole media would have forced the government to apologise. Plz spread this video so that Hindus can know how our religion is been destroyed by these secular parties... 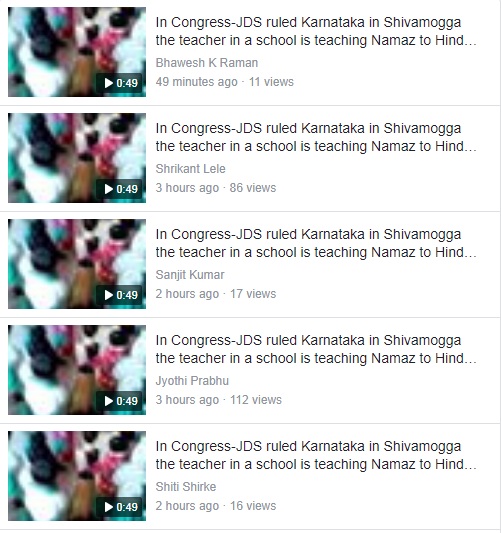 The video has also been retweeted by Dr. Aishwarya S, an editor at fake news website Postcard News. Postcard News also posted the video to its Facebook page only to delete it later. 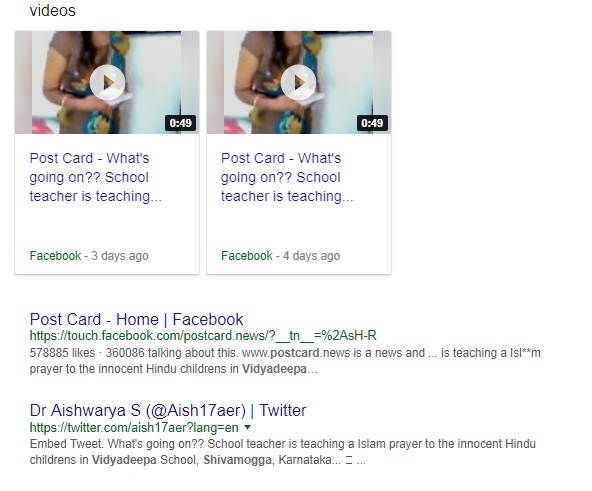 BOOM identified the school in the video as Vidyadeep Vidyalaya, a kindergarten school in Shivamogga district of Karnataka.

“For Environment Day we conducted a program where all the kindergarten students recited verses from all the three religious books. Since this was a success we thought of doing it again for Independence Day and the video shows us practicing for the same,” Janardhan told BOOM.

BOOM accessed the second video and it clearly shows the same children from the first video reciting a Sanskrit Shloka. The video has one teacher narrating the Shloka which the students then repeat. The teacher who taught the verses from the Quran is also present in the classroom.

She added that she was surprised when some parents approached her after few days later claiming that they heard their children were being “converted” at the school. “I was shocked! I showed them both the videos - the one with children reciting Hindu Shlokas, and the Quran verses.

"We also took them to a practice session where the children recited verses from the Bible in addition to the Gita and Quran. They told me that they had only seen the video of the Quran verses which was all over Facebook and Whatsapp and hence were concerned.”

The school has since scrapped the program for Independence Day next month because of the backlash it has received online.

“We wanted a program which showed a unified world. We did not have any ill intent but our teachers and the school has had to face a lot of backlash and anger due to that video. I cannot put my teachers’ lives in danger or bring harm to my school so we are not going ahead with the religious scriptures event,” she said.

Kannada website Shivamogga Live also fact-checked the viral video on June 30. Nitin Kaidotlu, founder of the website said that the video was viral on Whatsapp in the district. "Only one video was made viral by some people. The second video shows the children learning Hindu scriptures too".

Claim :   In Karnataka, teacher is teaching Namaz to Hindu Students
Claimed By :  Facebook posts
Fact Check :  FALSE
featured Islamic prayers Karnataka Quran School is teaching Namaz to Hindu children Shivamogga Viral video
If you value our work, we have an ask: Our journalists work with TruthSeekers like you to publish fact-checks, explainers, ground reports and media literacy content. Much of this work involves using investigative methods and forensic tools. Our work is resource-intensive, and we rely on our readers to fund our work. Support us so we can continue our work of decluttering the information landscape. BECOME A MEMBER
📧 Subscribe to our newsletter here. 📣You can also follow us on Twitter, Facebook, Instagram, Youtube, Linkedin and Google News 📝Stay updated with all our latest fact check stories.