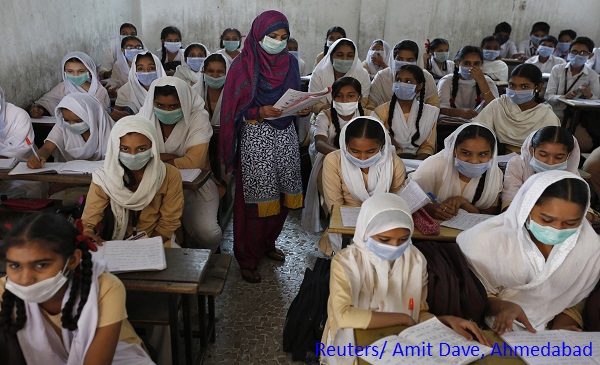 Swine flu has returned and this time it has claimed the life of an 18-month old in Mumbai. The boy, a resident of Worli in Mumbai succumbed to the virus on 28th April. The infant was treated in a hospital for a few days but his condition deteriorated. A total of 21 Swine flu cases have been reported by Mumbai’s civic body between January and April, say several newspaper reports.

But, the worst hit this time appear to be Maharashtra where the flu has claimed 85 lives in the first three months of this year, up from the 25 deaths recorded throughout 2016, reports Hindustan Times.

23 lives have been lost in Kerala alone, according to several news reports on May 1, 2017. "This year, the prevalence has gone up to 27%. This is the eighth year since the Influenza A H1N1 pandemic of 2009 and this virus is now part of our seasonal influenza viruses. Some cases should be expected every year,” says Amar Fettle, State Nodal Officer for H1N1, reports The Hindu.

While there are no official consolidated numbers of Swine Flu cases across the country, several hundred cases have been detected in West Bengal, Maharashtra and many of the north Indian states.

Here are 5 things to know about Swine Flu.

Does not look like, if the National Institute of Virology (NIV) based in Pune are to be believed. The NIV say they have isolated a new strain called the Michigan strain, that has been in circulation in the US since the last two years. This strain, different from the California strain found in 2009 has now found its way to India.

Influenza viruses can be directly transmitted from pigs to people and from people to pigs. These infections have most commonly been reported after close proximity to infected pigs, such as in pig barns and livestock exhibits housing pigs at fairs. Infected pig cough or sneeze and droplets with influenza virus in them can spread through the air. If these droplets land in your nose or mouth, or are inhaled, you can be infected. There is also some evidence that you might get infected by touching a surface with virus on it and then touching your mouth or nose. A third way to possibly get infected is to inhale droplets or dust containing influenza virus. Scientists aren’t really sure which of these ways of spread is the most common.

Human-to-human transmission of variant flu viruses also has occurred, though this method of spread has been limited. This kind of transmission is thought to occur in the same way that seasonal flu transmits in people, which is mainly through coughing or sneezing by people who are infected. People also may become infected by touching something with flu viruses on it and then touching their mouth or nose. It’s important to note that in most cases, variant flu viruses have not shown the ability to spread easily and sustainably from person to person.

Pregnant women and those already suffering from a disease have a higher risk of getting the flu. Once cured, there are chances that the flu may lead into other serious problems like breathing problems, pneumonia, etc.

4) What are the symptoms of Swine Flu?

The symptoms of swine flu are similar to regular flu. Fever, cough, nasal secretions, fatigue, chills, sore throat and headache are some of the common symptoms.

5) What are the precautions one can take?

Anyone experiencing the above symptoms should see a doctor. As all the symptoms of Swine flu and seasonal flu are the same, there are medical tests that need to be performed to determine the type of flu. Doctors advise those having these symptoms to stay at home to prevent the spread of the disease. Those with regular flu are more likely to get it. It is still unclear if vaccines that were used on a preventive basis for the previous strain of H1N1 can still be used to fight the disease.