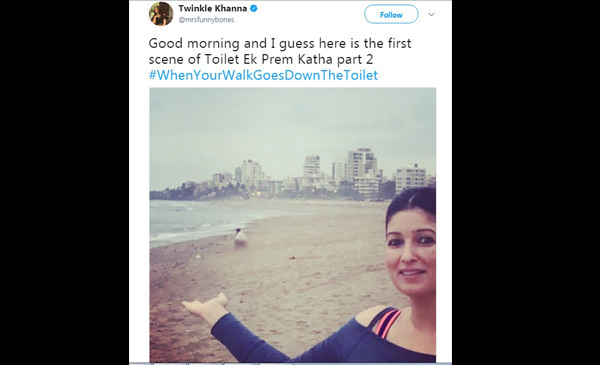 Twinkle Khanna’s early morning tweet on August 19 sharing a picture of a man defecating on an open beach in Mumbai has gone viral with strong views on whether she should have shared the image. Twinkle Khanna, known for her witty humor on social media had called the image as the first scene of Toilet Ek Prem Katha part 2.

Several users wondered if the image was a publicity stunt for her husband Akshay Kumar’s movie by the same name that has already crossed earnings of Rs 100 cr. Others tweeted if she would have shared the image if the person in question would have been a woman.

The govt 1st fails to provide facilities to the most vulnerable. Then privileged people like us shame them for not having access. 2/2

#mockery of men's dignity for doing cheap movie promotions/tweet. You would not have dared if it was women. #MenKiBaat

But @mrsfunnybones had several supporters as well who argued why the person in the image could not have used the nearby public toilet.

But people should be awake too : they can always go to closest toilet

While Twinkle Khanna’s tweet may have been called insensitive, the question remains whether Mumbai will ever be able to solve its open defecation crisis?

Ironically on July 7, Maharashtra Chief Minister Devendra Fadnavis had put out a congratulatory tweet on Mumbai being revalidated as Open Defecation Free by Quality Control of India. He referred to Greater Mumbai which includes South Mumbai and the eastern and western suburbs of Mumbai. These areas are under the administration of Mumbai Corporation of Greater Mumbai (MCGM) or BMC. Greater Mumbai has a population of over 1.24 cr.

Factchecker, through a series of photos, showed that Greater Mumbai is not yet Open Defecation Free (ODF). These included shots from different parts of city such as Sion, Kurla, Bandra Reclamation and Mahim Causeway.

‘A city / ward can be notified/declared as ODF city/ ODF ward if, at any point of the day, not a single person is found defecating in the open’ – according to Swachh Bharat Misson Urban Guidelines.

According to Ministry of Urban Development, following are the ‘necessary infrastructure and regulatory conditions’ required to be declared Open Defecation Free -

CAG Survey On Construction of Toilets in Mumbai

A CAG report on Local Bodies in Maharashtra dated August 2017 pointed out that Greater Mumbai faced a shortage of 20,195 toilets as of March 2016.

Mumbai Sewage Disposal Project (MSDP) under MCGM responsible for sewage management in Greater Mumbai was supposed to construct 25,992 toilets. However, only 5797 toilets were constructed as of March 2016, thus meeting only 22% of the target.

Moreover, out of the 8594 toilet blocks only 30% were connected to the sewer lines and had electricity and only 75% had water connection. Instead of maintaining a 1:50 ratio (toilet/ persons), a toilet was used by 11 to 417 persons.

Thus, the report says – ‘The objective of the MSDP for reducing open defecation was not achieved’.

Parameters met but what about reality?

While Greater Mumbai may have met all the parameters to be called open defecation free, the actual problems faced by those who have to rely on public toilets are often not captured. This article relates the story of 23-year old Manoj who explains why despite having access to a community toilet, he is forced to defecate in the open. Clearly, not having enough toilets, the lack of hygiene, and the long queues he encounters every morning are problems no government statistic is willing to look at before declaring a city open defecation free.