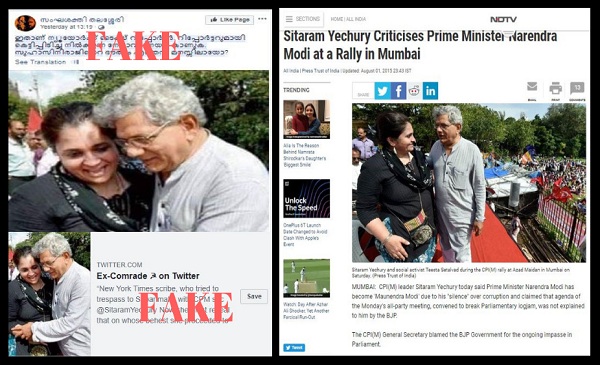 A 2015 photo of CPI-M's Sitaram Yechury with activist Teesta Setalvad is being shared on social media as Yechury meeting New York Times reporter Suhasini Raj, who recently aborted her trek to Sabarimala after massive protests. Raj was recently in the news as protesters in Sabarimala stopped her from entering the temple and allegedly pelted stones at her. The photo is viral on WhatsApp, Facebook and on Twitter with various captions slamming the journalist and Sitaram Yechury, general secretary of the Communist Party of India (Marxist).

#SaveSabarimala The @nytimes waali @suhasiniraj and how do commies manage to produce scums with such regularity? And what was this @SitaramYechury trying here pic.twitter.com/En8Tb3tU6A

The picture is also being shared over WhatsApp and Facebook in Malayalam with a misleading caption. An account called Ex-comrade also tweeted the photo, but later deleted its tweet. The handle has been regularly posting about the Sabarimala issue slamming the Left government and women trying to enter the temple. 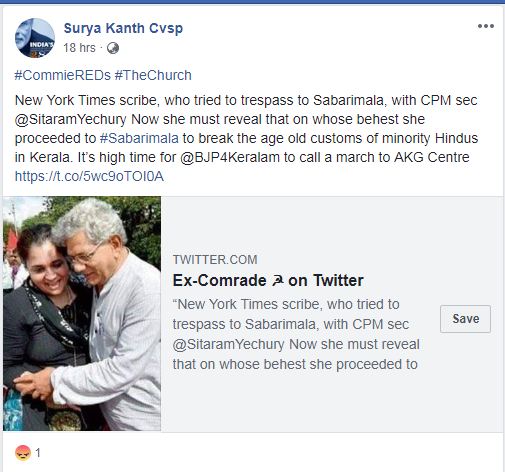 Raj herself called out the photo on Twitter. "The harassment on twitter continues unabated for second day in a row," she tweeted. "This one has a funny photo of @SitaramYechury with some lady whom this harasser calls mine."

The harassment on twitter continues unabated for second day in a row. This one has a funny photo of @SitaramYechury with some lady whom this harasser calls mine. https://t.co/i0orLXEcLi

BOOM was able to verify that the woman in the photo is in fact activist Teesta Setalvad. The photo is from August 2015 during a rally organised by CPI (M) in Mumbai's Azad Maidan. The rally was attended by many CPI(M) leaders and also saw Setalvad share the dais with them. Setalvad is an activist and founded the Citizens for Justice and Peace. BOOM was also able to trace the photo to Press Trust of India's archives. It was shot by photographer Santosh Hirlekar. The rally was widely covered by news outlets in 2015 and other photos from the event can be found on sites including the Telegraph, and NDTV. 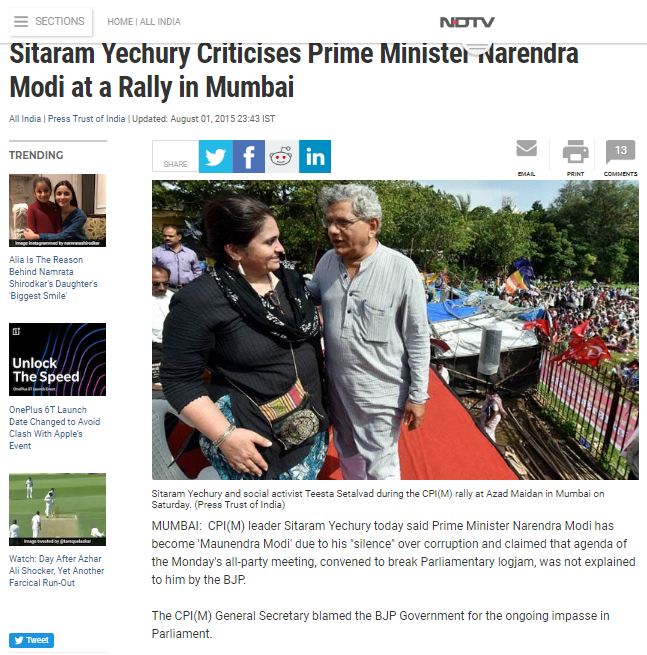 CPI-M, led by Chief Minister Pinarayi Vijayan has blamed the Rashtriya Swayamsevak Sangh (RSS) for for the violence in Sabarimala. The shrine has been rocked by protests in the past week after protesters turned violent towards journalists and women devotees, who tried to enter the temple premises. The Supreme Court in a landmark judgment on September 28, 2018, had permitted women across all ages to enter, breaking an age old tradition. Earlier only men and pre-menstruation and post-menopausal females were allowed inside, restricting entry to women during their menstruating age.
Claim Review :   The New York Times Reporter With CPI(M) Leader Sitaram Yechury
Claimed By :  Social Media
Fact Check :  FALSE
Activist CPI CPI(M) Facebook Fake fake news featured Kerala Kerala protest Protest RSS Sabarimala
If you value our work, we have an ask: Our journalists work with TruthSeekers like you to publish fact-checks, explainers, ground reports and media literacy content. Much of this work involves using investigative methods and forensic tools. Our work is resource-intensive, and we rely on our readers to fund our work. Support us so we can continue our work of decluttering the information landscape. BECOME A MEMBER
📧 Subscribe to our newsletter here. 📣You can also follow us on Twitter, Facebook, Instagram, Youtube, Linkedin and Google News 📝Stay updated with all our latest fact check stories.