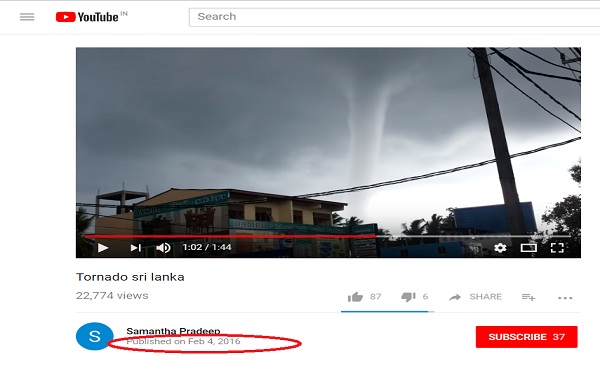 An old video of a tornado believed to be in Sri Lanka is being shared on social media as footage of cyclone Ockhi. News channel IndiaToday aired the video calling it exclusive footage.

In the 17 minutes and 31 second video, the visuals from the old video play for nearly 4 minutes at the beginning while the IndiaToday anchor interviews weather blogger Srikanth from Chennai. The news outlet uploaded the video on November 30, 2017.

However, BOOM traced a longer and clearer version to YouTube where it was uploaded by one Samantha Pradeep on Feb 4, 2016. There are at least three comments on the video which date back to at least ten months ago. BOOM tried to get in touch with Pradeep but is yet to receive a response.

While the video has been uploaded by an individual user and not a news channel BOOM cannot verify the accuracy of what is being claimed or time when the video was shot. We have to rely on various visual and audio clues.

In the video, voices of at least two men can be heard speaking in Tamil and Sinhalese. The men can be heard saying that the tornado could perhaps be heading for them and that the man recording should keep the camera steady. The sign boards in the video are in English and Tamil.

A signboard of 'Damro' 'Internationally Trusted Furniture' can also be seen. Representatives of Damro in Sri Lanka could not immediately be reached for a comment. A message to the company's facebook page went unanswered.

Not just news channels but ordinary folks in India and Sri Lanka too shared the video claiming it was recent.

At the time of writing this article at least 16 people had died in India and Sri Lanka while others have been evacuated or rescued as the deep depression in the Bay of Bengal turned into a cyclone on Thursday. The cyclonic storm Ockhi intensified into a severe cyclonic storm on Friday . Lakshadweep Islands is now on high alert, private weather forecaster Symetweather reported.