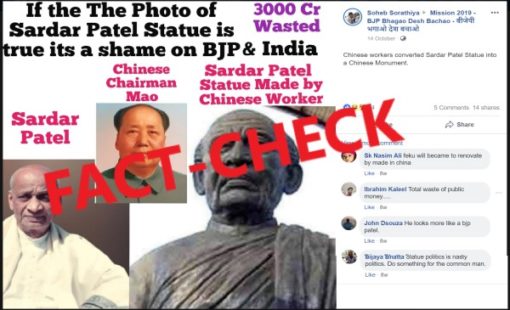 The viral posts on Facebook claim that the Bharatiya Janata Party used labour from China who constructed a "Chinese version of Patel".

On Sunday, journalist and former Rajya Sabha member Pritish Nandy also shared the old photo on Twitter claiming it to be the Statue of Unity and alleging that the statue bore no resemblance to Patel.

Nandy tweeted the photo with the caption, "The statue of Sardar Patel is so tall that you can hardly see his face. If you did you will notice there is no resemblance to the real man."

The statue of Sardar Patel is so tall that you can hardly see his face. If you did you will notice there is no resemblance to the real man. pic.twitter.com/G53rznNd0a

Nandy's tweet soon received more than 500 retweets and up to 1000 likes. While many pointed out to Nandy that it was not the photo of Statue of Unity, Nandy refused to delete the photo.

Wrong picture on the right, Pritish. It is some other statue. The Statue of Unity is an accurate likeness of Sardar Patel.

Nandy defended his tweet claiming that news magazine Outlook had also carried the same photo for Statue of Unity.

Using reverse image search tools, BOOM was able to ascertain that the photo is indeed a statue of Patel but built in 2008. The statue in the photo is installed at Gandhinagar in Gujarat and was built by late sculptor Jasuben Shilpi. The viral photo is a cropped version of a full length image available on Getty Images. 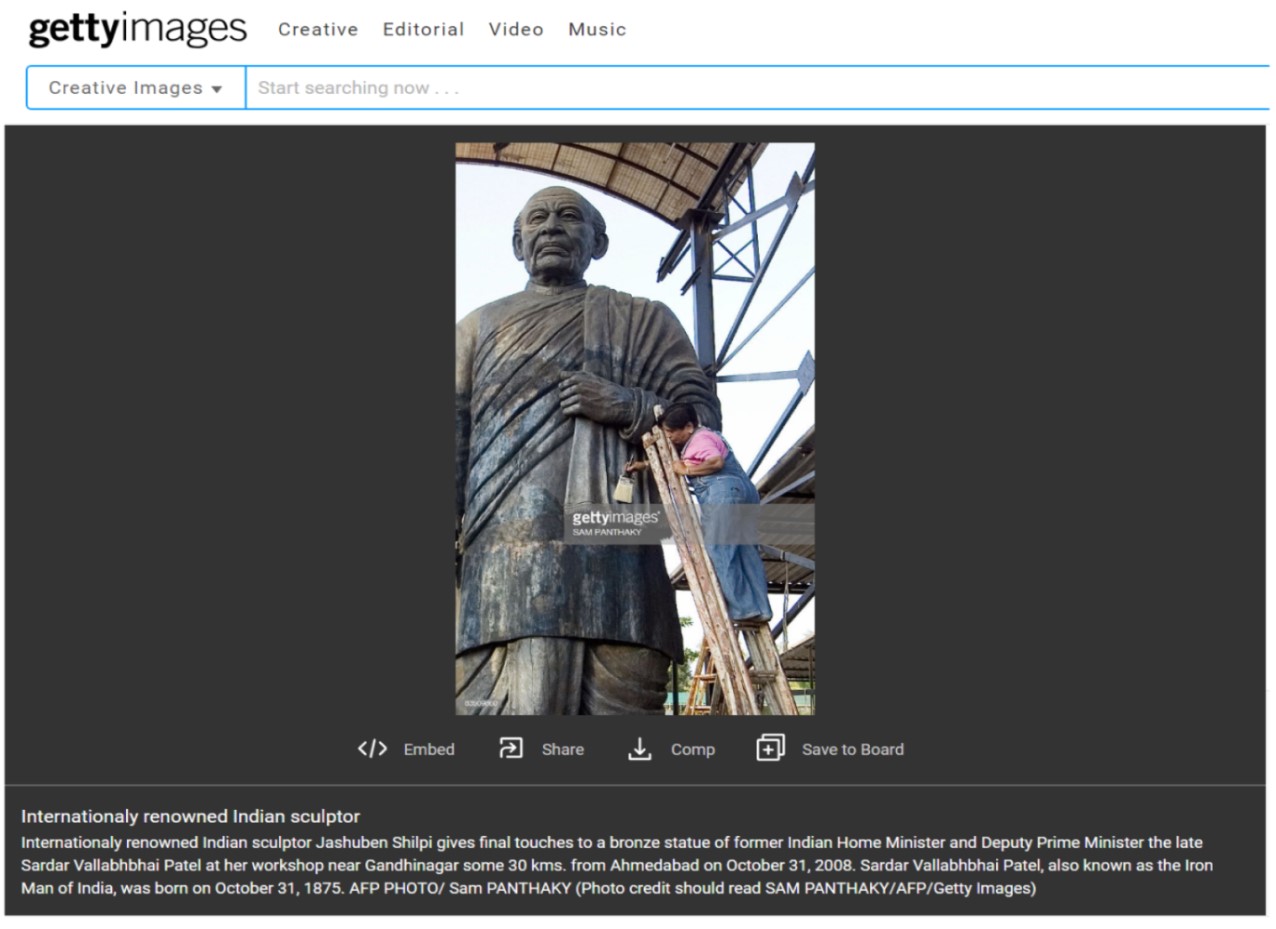 Screenshot of the original photo as is available on Getty Images

The photo was clicked in 2008 by an AFP photographer Sam Panthaky and shows the late sculptor Shilpi in it. The photo on Getty is captioned, "Internationally renowned Indian sculptor Jashuben Shilpi gives final touches to a bronze statue of former Indian Home Minister and Deputy Prime Minister the late Sardar Vallabhbhai Patel at her workshop near Gandhinagar some 30 kms. from Ahmedabad on October 31, 2008. Sardar Vallabhbhai Patel, also known as the Iron Man of India, was born on October 31, 1875." The caption clearly mentions the date the photo was clicked and the place the statue is present.

BOOM also verified Nandy's claim that the same photo tweeted by him has been carried by news magazine Outlook. In an article titled, 'How Is The Fake News Factory Structured?' published on December 6, the magazine carried a screenshot of one of the fake posts about Statue of Unity that went viral during its inauguration.

The photo which shows an old photo of Patel with a photo of the statue, carries a caption, "After Congress president Rahul Gandhi said the recently-unveiled statue of Sardar Patel was made in China, Congressmen circulated a photograph of an old statue of the freedom fighter erected in 2008." The story then goes on to explain in detail how there will be more fake news in days leading up to the 2019 elections. 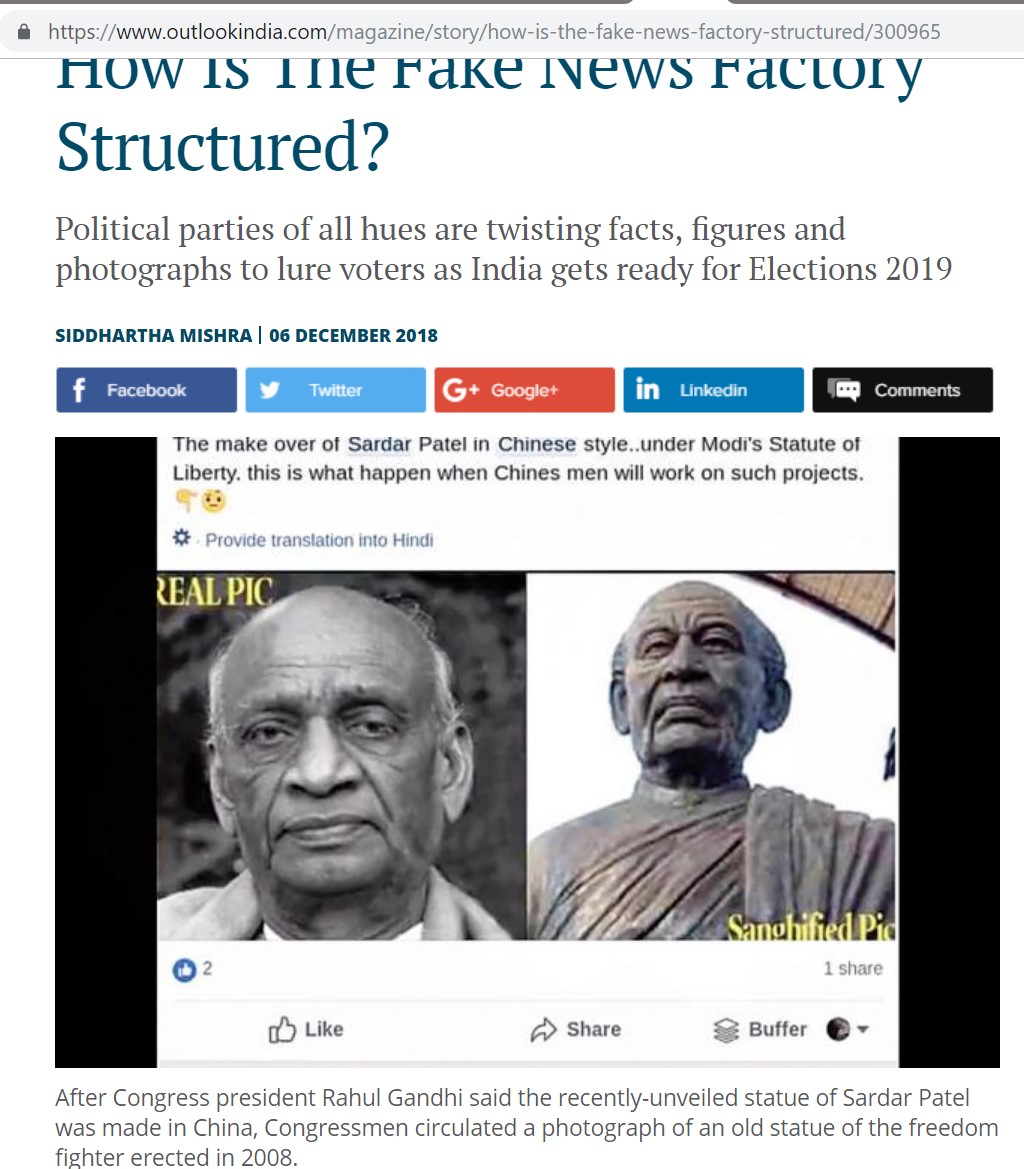 Claim Review :  The statue of Sardar Patel is so tall that you can hardly see his face. If you did you will notice there is no resemblance to the real man
Claimed By :  Pritish Nandy
Fact Check :  FALSE
Facebook fake news featued Gujarat Iron Man of India Pritish Nandy Sardar Patel Statue of Unity