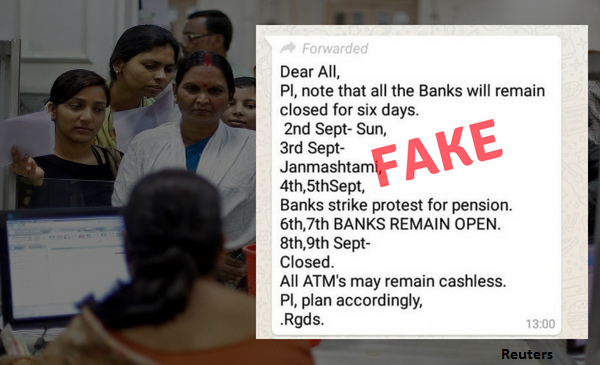 Government rubbishes rumours on social media that "banks will be closed for 6 days in the first week of September 2018". Says banks will remain open all days except Sunday in most states. pic.twitter.com/uuNeFaDqe3

BOOM helpline received one such message after news emerged of the Reserve Bank Of India employees calling for a strike and confusion over holiday due to Janmashtami.

Janmashtami is a state declared holiday and banks will be functional across India. But a few branches of Banks in a few regions will be shut due to the celebrations of Janmashtami.

The PIB release also mentioned that ATMs in all States will be fully functional and there will be no impact on online banking transactions. Banks have been advised to ensure that sufficient cash is available for dispensation from ATMs. Banks will remain open on all other days.

A State Bank Of India (SBI) spokesperson also clarified, "This message is obviously fake. On September 3rd, only a few branches of SBI will not be functioning due to celebrations in those regions but on the other days, the bank is functional. The call for strike by the RBI will have no impact on the SBI's functioning."

Speaking to BOOM, Vishwas Uttagi of All India Bank Officer's Association said, "No, September 3rd is a State holiday and not a Bank holiday and as far as September 4th and 5th are concerned, the entire banking industry will be functional as normal. Only RBI's employees have called for strike and this will have no impact on the functioning of the other banks all across India."

Out of the total 31 regional offices of the RBI, 16 offices are going to remain closed on September 3rd as per its website.