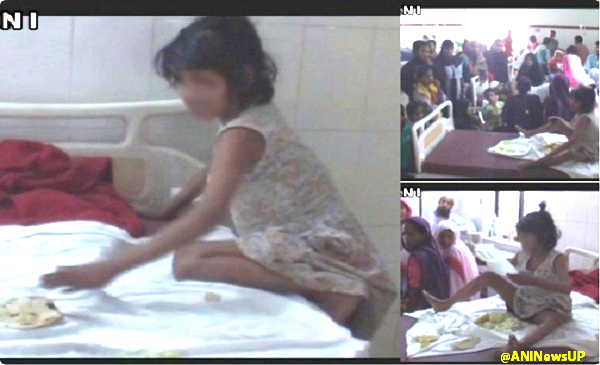 This is a cliche that every student of journalism hears right from the first day of joining a media school.

The story of the so-called 'Mowgli girl' from Uttar Pradesh's Bahraich district is proving to be a classic case of the perils of publishing sensational stories without having adequate information to cross check facts. And those leading the charge this time were not just digital news websites but also mainstream publications, not just from India but around the world.

The existence of this young girl was first reported in the early hours of April 6 by several Hindi news publications and their websites. One of the early reports filed by Navbharat Times on April 5 at 22:53 pm and finally updated the next day at 12:49 pm with a very catchy headline, "Girl grew up among monkeys in the jungle, screams like them." 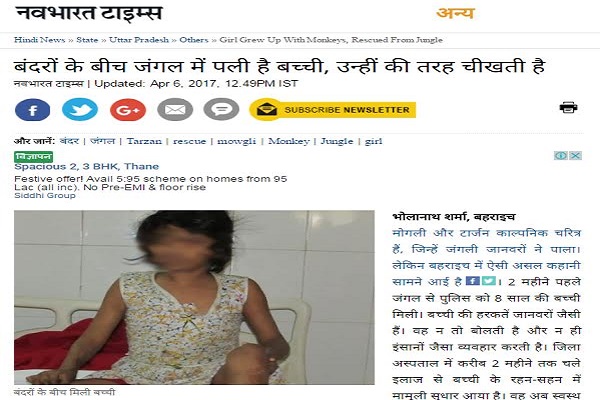 The story explained that this 8-year old girl was found 2 months back in the jungle by the police. The girl's actions were like wild animals, said the report. Calling her a 'Mowgli girl', the report talks about sub inspector Suresh Yadav who is said to have found the girl surrounded by monkeys. Yadav tried to rescue the girl but the monkeys got aggressive and made loud noises. The report says that Yadav claims that the girl also started screaming and with great difficulty they rescued her and took her to the district hospital where she was admitted.

This seems to be the common thread across all stories when the story got reported. See this story on www.haribhoomi.com

News agency ANI also tweeted pictures of the girl on April 6 at 10:46 am.

ANI's tweet opened the floodgates on the story. Across the board, all national newspapers (Times of India, Hindustan Times, Indian Express) reported the story using the same information, that seems to have originated from the regional news outlets citing Suresh Yadav's account as the primary source. Statements by additional superintendent of police Dinesh Tripathi and chief medical superintendent DK Singh also added anecdotal strength to the stories about the feral girl.

With the Indian media going wild about the existence of a 'Mowgli girl', how can the foreign media be left behind? From the New York Times to The Guardian to The Washington Post, everyone reported about the mysterious girl who brought Rudyard Kipling's 'Mowgli' to life. The foreign publications had sourced the story from international news agency Associated Press (Click here)

But while the stories were getting published with new details through April 6 and 7, there were reporters like The Guardian's Michael Safi who found the story to be too extraordinary to be true. Speaking to BOOM, Michael said, " A human being cannot survive with a monkey under normal circumstances as they live in the wild around predators. This sounded to me just like one of these stories you often hear in India about the jungles. It took me just one call to the forestry officer who said that the girl was not raised by the monkeys."

The Guardian's April 8 story quotes JP Singh, the district's chief forestry officer saying, "I think the family members of this girl had been aware that she is not able to speak, and they may have abandoned her near the forest road. If she was living with monkeys it would have been for a few days only, not for a long time."

This story brought out all the skeptics and reporters started making calls to various officials involved in the treatment and rehabilitation of the girl.

The Indian Express filed an extensive report on April 9 where several myths about the 'Mowgli girl' were busted. The story quoted multiple officials who clarified that the girl was neither naked nor moving around on all fours when she was found by the forest officials. More importantly, there were no monkeys.

Head constable Sarvajeet Yadav, part of a 3-member team claims he found the girl on the road connecting Bahraich to Lakhimpur after they received a call on the helpline by a passerby who saw the girl. Whether Suresh Yadav who was originally quoted by regional publications about the presence of monkeys around the girl, was part of the team is not known.

So how did she came to be called the 'Mowgli girl'? Dr D K Singh, the Chief Medical Superintendent at Bahraich district hospital, says a Hindi newspaper first called her the “Mowgli girl”, according to an interview given to The Indian Express. He and the hospital have been flooded with calls and visitors since.

Where is the girl now?

Fortunately for the girl who has now been named 'Ehsaas' by her caretakers, the debunking of the 'Mowgli girl' story has proved to be a blessing with the focus shifting away from her. She has started showing signs of improvement since the time she was brought to Nirvan Rehabilitation Centre at Lucknow.

Speaking to ANI, a teacher at the rehabilitation centre said, "Earlier, she used to throw away plates and glasses, now she has learnt to eat and drink in them. So she is improving."