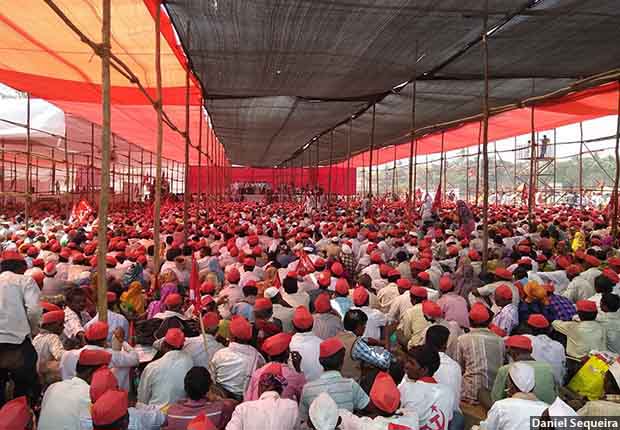 Mumbai: Faced with a public-relations crisis, the government of India’s richest state accepted four major demands made by thousands of farmers, after they flooded in to Mumbai on March 12, 2018.

A seven-day, 180-km march of 35,000 mostly poor farmers in India’s richest state finally attracted nationwide attention when they reached the country’s financial capital to bring their problems to the attention of Maharashtra chief minister Devendra Fadnavis.

They marched for four distinct reasons: land rights to those who have tilled forest land for several years; better minimum prices from the government for agricultural produce and better security against the vagaries of the monsoons; pensions for agricultural labour, still considered a part of the informal sector; proper implementation of farm-loan waivers that the government promised; and for relief from the economic losses of 2016’s demonetisation decision.

As the march made national headlines, the government announced by the evening of March 12, 2018, that it would accept demands related to expanding the eligibility of the farm-loan waiver announced in 2017, quicker transfer of land titles under the Forest Rights Act, 2006, and increasing pensions to agricultural labourers, from Rs 500 to Rs 1,000 per month.

From over 135 villages across Maharashtra, the farmers began their journey on foot from CBS Chowk in the northern city of Nashik on March 5, 2018. Organised by the Akhil Bharatiya Kisan Sabha (All Indian Farmers’, affiliated to the Communist Party of India-Marxist, the farmers arrived at the Thane-Mulund toll naka on the north-eastern border of Mumbai on Sunday afternoon, March 11, 2018.

Much of their simple footwear–slippers and sandals–fell apart. Some left families behind, others, especially the older ones, walked even though they struggled to keep up, and cooked food and slept where they could.

They walked 30 km every day, sleeping on roadsides, and eating food cooked on wood fires along the way. To avoid inconveniencing students appearing for their exams and citizens commuting to work, the farmers walked the last leg of their journey overnight, reaching Azad Maidan in South Mumbai on Monday, March 12, 2018.

Maharashtra’s agricultural sector is set to decline 8.3% this year due to deficient rain and despite several irrigation projects, currently only 18% of farmland in the state is irrigated, shows the Maharashtra Economic Survey 2018.

Maharashtra’s agrarian crisis is common to farmers nationwide, many of whom are steeped in a cycle of low returns, debt–and, often, death–in an age of increasingly uncertain weather.

Over a year to June 2013, 70% Indian farm families spent more than they earned, over 52% were indebted and health costs were adding to their debt, as IndiaSpend reported on June 27, 2017. In five years to 2015-16, real farm income per cultivator increased only 0.44% per year, we reported.

Climate change could slash India’s farm income by up to 25%, warned the Economic Survey 2018. Uncertain weather affects the ability of government extension systems to provide accurate advice to farmers, IndiaSpend reported on June 8, 2017. For example, while Maharashtra received plentiful rains in 2016, mitigating the droughts of 2014 and 2015, many parts of the state also endured floods that year.

A condition-free loan waiver was one of the key demands of the Kisan Long March — part of disparate demands by farmers to collectively waive $49.1 bn (Rs 3.1 lakh crore) worth of farm loans – 16 times 2017 budget for rural roads, as IndiaSpend reported on June 15, 2017. However such waivers fail to address the deeper farm crisis because past experience indicates little or no impact on finances or suicide rates; about 32% or 79 million of small or marginal farmers still rely on informal sources of credit. Since Maharashtra’s previous farm-loan waiver of 2008, agricultural bad loans grew three-fold, from Rs 7,149 crore ($1.2 billion) in 2009 to Rs 30,200 crore ($4.7 billion) in 2013

Further, the rural economy has yet to recover from a cash crunch induced by demonetisation.. A year after Prime Minister Narendra Modi pulled out of circulation 86% of India’s currency, largely held in Rs 500 and Rs 1,000 notes, farmers in Nashik reported cheques still took weeks to encash, leaving them without money when they needed it most, as IndiaSpend reported on November 4, 2017.

As district cooperative banks, which over 70% of India’s onion belt depends on, are still to recover from demonetisation, farmers struggle to access credit,, we reported on November 11, 2017.

Here are the farmers we met:

Kamli Babu (85) has walked from Dahanu district to Nashik to Mumbai. She has been cultivating a 3 acre patch of land for as long as she can remember but has no ownership to it. She can earn from farming for only 6 mos/yr due to the vagaries of the monsoon (1/n) #KisanLongMarch pic.twitter.com/iU5C7usrZ6

Rest half of the year she works as an agricultural labourer. She is paid for her work in food, not cash. What she grows on the farm (mostly rice, some nachni) goes to feeding her family i.e. her son, his wife and his 7 children (aged 3-5yrs) #kisanlongmarch #farmersprotest

Her demands are : 1) assured cash payment of wages to farm workers 2) ownership of forest land (that Kamli Babu has been cultivating for years) and 3) pension for old farmers so more like her can retire

Kamli Babu has already submitted her forms for pension with the Tehsildar more than 2 yrs ago but is yet to receive word from the government.

Kamli Babu (85) describes to us how she walked from Dahanu to Nashik to Azad Maidan in South Mumbai. She wants ownership of the forest land she has been cultivating with her son's family since as long as she can remember #KisanLongMarch pic.twitter.com/u2bOeuy9i5

The families of Prakash Dambale (32) and Nana Chahale(34) have been working on a 10 acre land for nearly 50 years since the 70s. They inherited the job from their fathers. #KisanLongMarch #FarmersProtest pic.twitter.com/c06W609egP

They have now walked from Nashik to Azad Maidan, covering a distance of 180kms, to demand ownership of the forest land under the forest rights act. "We have been protesting for this since 2010. We've even gone to Delhi for this. Walking for so long is not a big deal."

"We need land ownership to protect our rights. At any point the govt can claim this land is forest and come take it away from us. What happens to the 50 years we have worked here?"

Nana Chahale (34) tells us farmers are still reeling under demonetization. "The 3 banks we have in our taluka are overcrowded. Our savings, earnings, are stuck in district cooperative banks frm which the govt has refused to accept old notes since demonetisation #KisanLongMarch pic.twitter.com/VgAWIEGT9T

On the loan waiver, Prakash Dambale (32) an adivasi fighting for forest land rights says: "We filled the online application for loan waiver for the credit society farm loans we took last yr. But the govt told us– first pay the loan interest on to get waiver" #KisanLongMarch pic.twitter.com/Xtq12JHxn0

Prabhakar Khadale (35) has walked 180 kms from Nashik to Azad Maidan. He wants ownership of the land his family has been tilling for the last 50 years since the 70s. "If we have ownership, we can dig wells, introduce irrigation for year-round crops" #kisanlongmarch pic.twitter.com/aVMfIOyTb1

When he is not tilling crops on the forest land his family has worked on, he works as a labourer on other farms. "I want my family to move out of this sustenance mode" Prabhakar tells me. #KisanLongMarch

Whatever extra Prabhakar cultivates, he sells it at a loss : "We sell our produce (jowar) to the govt-owned mandis for Rs 15. The market buys our produce for Rs 25 but the commute to these markets in Igatpuri and Ghoti cost more than the profit we could make." #KisanLongMarch

Hari Kale (38) tells us they are marching for better minimum support price from the govt. for agri-produce: "We invest 3x the amt & earn a third of it every yr. Always scrambling for money–We try to break the cycle of poverty bt we're pulled back constantly" #KisanLongMarch pic.twitter.com/UT7hIGtE2I

"The govt announced Rs 2000 MSP (Minimum Support Price) for onions but we did not get that when the time came to sell the produce. We were forced to sell at Rs 500-600. Same was the case for Tur and jowar" — farmer Hari Kale (38) from Dindori taluka, Punegaon pic.twitter.com/kGNPSqMYEl

Janardhan Chougare (41) another adivasi from Dindori demanding land rights under the Forest Rights Act, 2006 : "Without right to the land, we are not eligible for any of the Kisan credit, or insurance schemes, the govt puts out. Our situation remains unchanged." #KisanLongMarch pic.twitter.com/vqf9T6a8j5

Farmer Gunvant Parshuram Tone (56) from Amravati district, in the Vidarbha region of Maharashtra

"We barely earn so we go to rich farmers to work as farm labour. Our children only study till 8th Std.–till education is free. We don't have money for college fees, notebooks and textbooks. The children say it's better to work and earn an income than study." #KisanLongMarch pic.twitter.com/2tyHBv2Nld

Farmer Dattu Walamba (32) of Kasara, walked 100+ kms to Azad Maidan, Mumbai for land rights under the Forest Rights Act, 2006. He feeds his joint family of 16 with the Rs 25-30k he earns from a 10-acre plot the family has tilled since before he was born #KisanLongMarch pic.twitter.com/18wnjwmym2

"We have Aadhaar cards but we still don't get rations as we are yet to get our Below Poverty Line ration card. Earlier we used to 10 kgs but now we get only 5 kgs of ration," said farmer Walamba. "They refuse to recognize our poverty is seasonal & linked to the monsoons."

This article was first published on Indiaspend