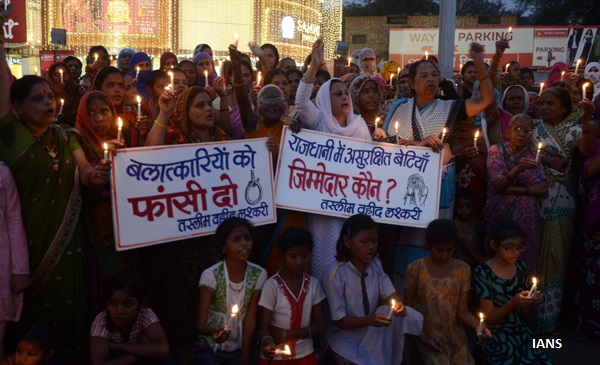 Women stage a demonstration against alleged gang rape of a 19-year-old woman in Bhopal on Nov 3, 2017. (Photo: IANS)

On December 5th, Madhya Pradesh assembly unanimously tabled a bill, one of whose provisions entails the death penalty on those found guilty of raping girls below the age of 12.

The Dand Vidhi Vidheyak, 2017 (Madhya Pradesh Sansodhan) will become a law upon receiving the ascent of the President of India. Law and Legislative Affairs Minister Rampal Singh introduced the bill, which was discussed and then passed by all parties, including the ruling BJP and the Congress.

The bill was tabled on a day when the National Crime Records Bureau published data which show Madhya Pradesh had the highest number of rape cases in 2016 and was among the top 3 states where rape victims were under 12.

If approved by the president, Madhya Pradesh shall become the first Indian state to award the death penalty as punishment for rape.

When the Supreme Court had awarded death penalty to convicts in 2012 Nirbhaya rape and murder case, the apex court had emphasized that the case is ‘rarest of rare case’ and that they felt compelled to award this extreme punishment to ensure justice.

All you need to know about the bill

What the data shows

Maharashtra had the highest number of rape victims (348) below the age of 12 followed by Uttar Pradesh (327) and Madhya Pradesh (192).

Criticism against the bill

Detractors of the bill say it will spur rapists to kill their victims in order not to leave any evidence behind. Critics also argue that often perpetrators who commit crimes against children are known to them. In such cases, victims might be discouraged to speak up altogether fearing stringent punishment to family members.

Human rights group Amnesty International, which opposes the death penalty without exception, said 'there is no evidence that the death penalty is more of a deterrent than prison terms. The government should, instead, focus on ensuring the certainty of justice rather than increasing the severity of punishment.”