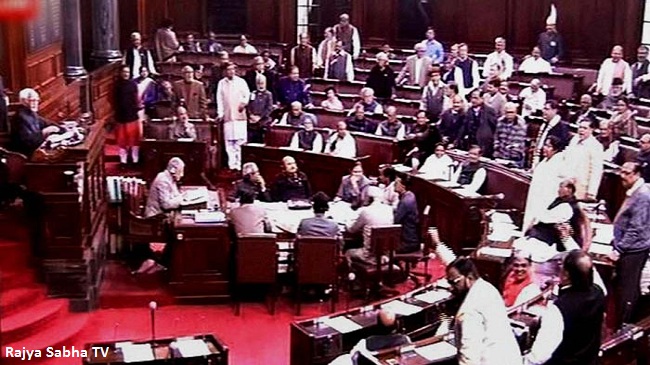 The actual impact of demonetisation on the productivity of the industry is yet to be arrived at. But its full impact can already be seen in how our MPs have worked during the 10th Winter Session of the sixteenth Lok Sabha. With the opposition in militant mode over not being consulted about demonetisation and the government refusing to yield ground, the Lok Sabha has functioned on an average of 1 hour 15 minutes per day, from the time the session began on November 16, 2016.

In the absence of abrupt adjournments, business hours in the Parliament add up to 6 hours in a day (11 am – 1 pm & 2 pm – 6 pm). So in total, both the Houses had 132 hours in hand to debate, discuss, question and most importantly pass bills. 18 sittings gone by, the Lok Sabha was in session for 21 hours and the Rajya Sabha for 20 hours, approximately (data collected from Parliamentary bulletins released). Thus, our elected MPs were in session for less than 20 % of the available time given to them to conduct business. This also includes the time our elected MPs attacked each other verbally, raising slogans, marching into the well thus obstructing the smooth running of the Houses.

This session, the Lok Sabha had in its schedule 22 sittings between November 16th – December 16th, 2016 and had on its legislative agenda 10 bills for consideration and passing, 9 bills for introduction, consideration and passing and 2 bills for withdrawals. These include important bills such as The Consumer Protection Bill 2015, The Citizenship (Amendment) Bill 2016, The Surrogacy Regulation Bill and also few bills related to GST which is to be rolled out in April, 2017. With 3 days and 18 hours left for the Session to end (Parliament resumes work on December 14 after a 4-day holiday), nothing much is likely to happen as the opposition parties are expected to continue their strategy of rushing into the well of the house and raising slogans, resulting in more adjournments.

PRS Legislative Research, a Delhi-based think tank has rated the productivity of Winter Session in Lok Sabha at 16 % and Rajya Sabha at 19 % (Data retrieved on December 12, 2016). This is the first time in the 16th Lok Sabha, the performance of both the Houses have been rated this low. In contrast, productivity of Lok Sabha and Rajya Sabha during the Monsoon Session, 2016 were at 101% and 96%, respectively. 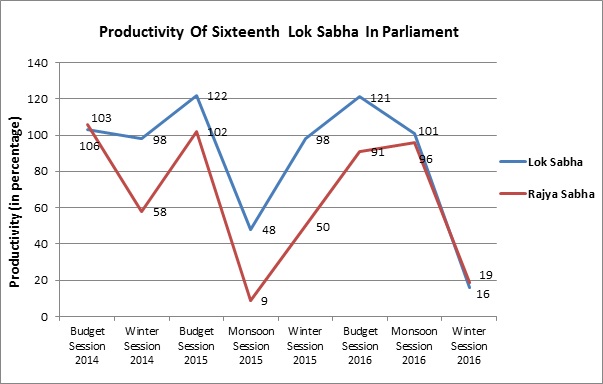 While the government and the opposition parties are still arguing over whether to conduct the debate on demonetisation with voting in the Lok Sabha, the upper house is in a logjam with the Opposition demanding a statement from Prime Minister Narendra Modi.

Hope our parliamentarians respect the advise of the statesmen President. 'Disruption is totally unacceptable in Parliamentary system'(1/2) pic.twitter.com/fROSq44tA6

President Pranab Mukherjee also criticized the Parliament, saying that the practice of disruptions was totally unacceptable. He said, “For God's sake, do your job. You are meant to transact business in Parliament…Parliamentary freedom should not be misused by causing disruptions,…..Dharnas can be organised anywhere else..”

And not wanting to be left behind, Prime Minister Narendra Modi was heard saying at a rally in Gujarat, “I am not being allowed to speak in Lok Sabha so I am speaking in the Jan Sabha.”

But time is running out for the government. The Goods and Services Tax, the largest tax reform undertaken anywhere in the world may miss its April 1, 2017 deadline with the opposition slowing down the process. Four pieces of legislation are required to be passed by Parliament for the roll-out of the GST. The sixth meeting of the Goods and Services Tax Council after having failed to reach a consensus on December 12 is now scheduled to meet on December 22-23. Clearly the momentum that the government had built over GST by actively working with the opposition looks to be lost for now.