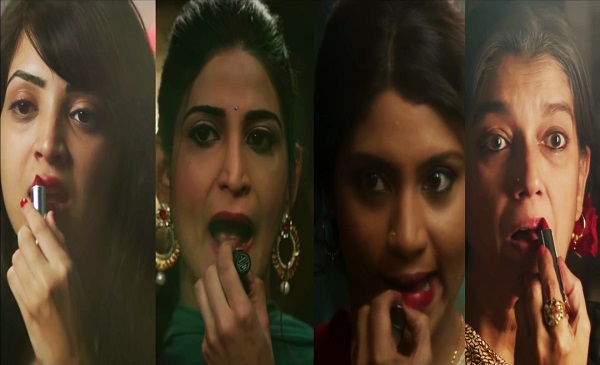 “We see many films on male bonding, but hardly any on female bonding,” award-winning Indian filmmaker Aparna Sen told Indian television news channel NDTV at Cannes, just after the screening of her latest film, Sonata.

Sonata, which has already been released in India, explores the lives of three middle-aged women and their friendships, a rare narrative in Indian cinema.

Sen’s statement comes a few weeks after another film on women bonding, Lipstick Under My Burkha, by the young director Alankrita Shrivastava, got the green light for release after a struggle with India’s film censors, owing to its feminist positioning and “risque” storyline.

Shrivastava’s film has already featured in festivals in Canada, France, UK and Japan, and won several awards. It was also screened at the Golden Globes.

But in its “motherland”, the release date is yet to be announced.

The film has been stalled as the Central Board of Film Certification, (CBFC) refused to give it clearance. On February 23, the government institution stated:

The story is lady oriented, their fantasy above life. There are contanious [sic] sexual scenes, abusive words, audio pornography and a bit sensitive touch about one particular section of society.

Lipstick Under My Burkha explores the life of four Indian women living in small-town India: a burkha-clad college girl, a young beautician, a mother of three and an ageing widow. The film follows these women as they recognise their desires and negotiate their sexuality within the claustrophobia of controlling familial relationships and invasive small-town life.

The stories of the four women are interspersed with each other’s as they carve out small windows of freedom for themselves within which they discover their “other” selves.

The arguments issued by CBFC foreground deeper issues. They exhibit the organisation’s complete inability to understand a film that questions the deeply patriarchal nature of storytelling in Indian cinema.

For many decades now, commercial cinema has robbed Indian film audiences of countless women’s stories. Over the years, real women characters have existed mainly in non-commercial, art-house films with limited funding and audiences. These include titles such as Ankur(1974), directed by Shyam Benegal, Arth (1982) by Mahesh Bhatt, Mirch Masala by Ketan Mehta (1987), Fire by Deepa Mehta (1996), and Astitva by Mahesh Manjrekar (2000).

Like most cinematic cultures including mainstream Hollywood, Indian cinema, and especially Hindi films – largely produced from Mumbai – discriminate against women in front and behind the camera. So much so that misogyny is routinised and normalised.

The film censor board regularly clears sexist and misogynistic films such as Indra Kumar’s Masti series. The poster of 2016 release in the series, Great Grand Masti, is itself evidence of how they “use” women in the filmic text. The film includes vulgar and sexist comments, ageism, rape jokes and it objectifies women throughout.

In fact, the ease with which these films get censor clearance shows the obtuse and inverted definitions the board uses to determine what is objectionable.

Real women have been rendered invisible at the cost of their bodies. The omniscient presence of a certain kind of song (to which women actors dance), often called “item number”, is the most obvious sign of their objectification.

The “item number” exists largely to titillate audiences. It can be dropped anywhere in the film with no narrative justification. A scantily-clad woman appears, dances to a cheesy song, often with double meaning, and is never seen again.

It is, at best, product placement to get the cash registers flowing at the box office. And the product, in this case, is the female body. Rarely does the censor board touch these songs.

In this environment, Lipstick Under My Burkha not only challenges the status quo within the Indian film culture but also questions CBFC definitions of “good” and “watchable”.

Several factors have, however, been changing trends in Indian cinema for over a decade now. Demographics show an increasing number of women with buying power in urban India and they have different expectations of cultural representation.

New business models, such as the entry of corporations into the film business, are appearing. Previously, production was dominated by families or independent producers.

Small cinema halls can also now showcase independent films as well as a big commercial movies. And young filmmakers such as Shrivastava are challenging older ways of storytelling.

The fact that top women stars choose to play lead roles in these films demonstrates the need for such narratives in popular culture.

These films explore the complexity of women’s lives, their fears and yearning through the idiom of friendship and camaraderie. Their portrayal of “sisterhood” is somewhat akin to the male-buddy genre, which has a number of cult classics, such as Dil Chahta Hai, Three Idiots and Zindagi Na Milegi Dobara.

It is noteworthy that many of these “sisterhood” films have been directed by women and are sidestepping the old ways of seeing women and men – be it through the use of camera or the way they use song and dance.

They are questioning traditional ideas to invent a new women-friendly gaze, as opposed to the male gaze. First identified by the feminist theorist Laura Mulvey, the male gaze is being wholeheartedly inverted and rejected in these films.

Sen’s Sonata and Shrivastava’s Lipstick Under my Burkha may lead to a sustained change in mainstream Indian cinema so women’s stories don’t get labelled and pushed to the limited category of “Women’s cinema”. Like all films, women’s stories also need to be tested against the same yardstick of good cinema or bad.

This genre would surely also gain colour and strength from its diversity. Women’s stories can surely get more fun, adventurous and innovative as they show the various sides of their complex existence.

It’s time India’s censors enable this change by modernising, so it can keep up with the evolving needs of audiences and the film community, and not make themselves completely redundant.

About the author: Anubha Yadav is an Assistant Professor/Film & Broadcast Studies, University of Delhi.