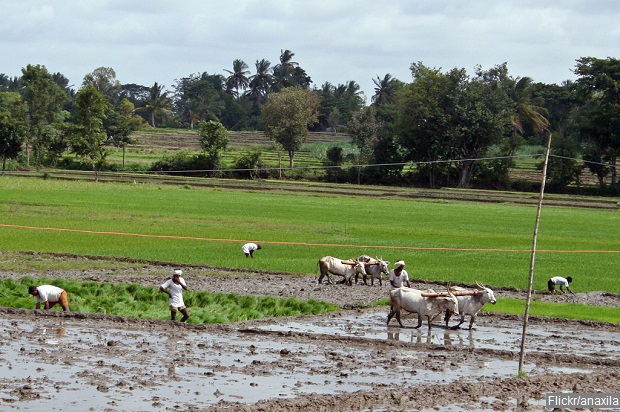 Mumbai: In 2017-18, Karnataka’s agriculture sector received, on average, six hours of power per day–lowest among the states for which data were available–according to latest national data.

Rural Karnataka, which accounts for 154 (69%) of the state’s 224 legislative constituencies, remains the primary focus of the election. Nearly 61% of Karnataka’s population lives in rural areas, and 54.6% of the state’s workforce is employed in agriculture and allied activities.

Karnataka’s farmers are battling drought and water shortage, and have been under dire financial duress, with the state recording second highest number of farmer suicides in 2016, IndiaSpend reported on May 8, 2018.

In 2016-17, agriculture–specifically, water pumping through irrigation pump sets–accounted for 40% of the state’s power consumption, according to data from the Karnataka Economic Survey 2017-18. Domestic (22%) and industrial (14%) consumption followed.

Irrigation–through pump sets–is imperative for the growth of the agricultural sector in the state, as 70% of cultivable land in Karnataka, as we said, is dependent on low and erratic rainfall.

Between June and September 2017, cumulative rainfall recorded in Karnataka was 774 millimetres (mm), as against a normal of 839 mm–a deficit of 8% with six districts falling under rainfall deficit category.

“Overall, the state escaped from severe drought situation due to favourable rains during August, September and October 2017,” the economic survey noted.

Tube/bore wells accounted for the 43% of the net irrigated area among all irrigational sources, followed by canals (29%) and dug wells (12%).

One BU is enough to power 10 million households–one household consuming, on average, 3 units per day–for a month.

“Karnataka state has been experiencing conditions of power shortage because of the ever-growing demand for power influenced by the rapid economic progress,” the states Economic Survey 2017-18 said.

The state meets its power shortage from neighbouring states. The growing demand and delay in completion of power generation projects in the state and central stations have led to increase power purchase from independent power producers, the report said.

Power distress is visible in urban areas as well. The state’s capital, Bengaluru, is facing power outages for long hours with elections around the corner, the News Minute reported on April 25, 2018.

“Unless the government manages its companies in the power sector in professional manner, allows [Karnataka Electricity Regulatory Commission] KERC to function as per the Electricity Act, 2003, and promotes solar energy in mission mode, supplying power on 24X7 basis will remain a mirage in the state,” Bhamy V Shenoy, an energy expert wrote in Deccan Herald in January 2018.

As of April 1, 2015, Karnataka had 39 unelectrified villages, all of which have been electrified since, according to the Centre’s Grameen Vidyutikaran dashboard. Of these, only 31% or 12 villages have all households electrified.

A village is considered electrified if power is provided to at least 10% households and public places like schools, panchayat offices, health centres, dispensaries and community centres.

As of May 7, 2018, of the 9.4 million rural households in the state, 94% (8.8 million) have been electrified, according to the Centre’s Saubhagya household electrification dashboard, while 580,376 households still lack access to electricity.

This story was first published on indiaspend.com