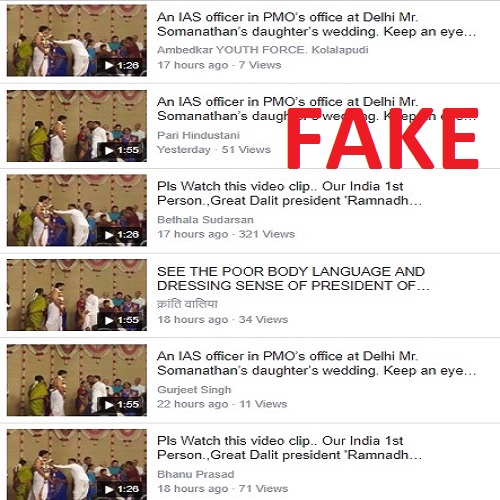 CLAIM: A viral video claiming that the President of India Ram Nath Kovind was snubbed at an IAS Officer Mr. Somanathan's daughter's wedding in Delhi is doing the rounds on social media. According to posts on social media, the wedding party can be seen showering attention on Prime Minister Narendra Modi who was also present at the wedding, while ignoring the President.

Fact: President Kovind was not present at the wedding. The man thought to be Kovind is actually the 20th Governor of Tamil Nadu, Banwarilal Purohit.

In the video, Narendra Modi is seen attending a wedding of IAS Officer TV Somanathan's daughter's wedding. He is seen greeting the couple and the other members of the family and also posing for a photograph with them. It was also claimed that the guy standing next to him is the President Of India Ram Nath Kovind and due respect befitting his constitutional status was not given to him.

FACT 1: Prime Minister Narendra Modi was in Chennai on the 6th of November, 2017 to celebrate the 75th Anniversary of the Tamil daily ‘Dina Thanthi’ at Madras University Centenary Hall in Chennai, as reported by ANI.

According to the schedule, he was going to attend the wedding of the daughter of the IAS Officer Mr. Somanathan, reported the Financial Express. Though there is no video evidence, it was reported that Narendra Modi will be attending the wedding. Also, the wedding was held in Chennai and not in Delhi.

FACT 2: The President Of India, Ram Nath Kovind, on the 6th of November was in Chhattisgarh as he had to lay the foundation stone of the Saamudayik Bhavan.

FACT 3: The person in the video with Prime Minister Narendra Modi is actually the 20th Governor of Tamil Nadu, Banwarilal Purohit. He, along with CM Edappadi K Palaniswami and Deputy Chief Minister O Panneerselvam had welcomed the Prime Minister on his arrival at Chennai. 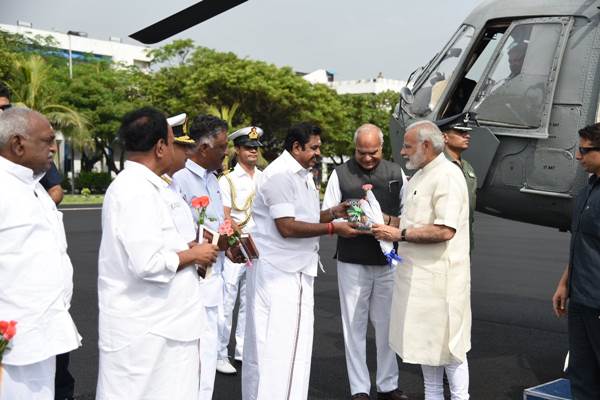