A series of images showing a boy rescuing a fawn from a river has been shared thousands of times with the claim that it occurred in Assam. This is false. The photos are in fact eight years old and were shot in Bangladesh.

The images show a young boy wading through a flooded river with a fawn held above the water.

Indian social media handles are sharing the images with the claim that the incident happened in Assam, which is battling floods. The images are being shared with the caption: "Real "Bahubali" of Assam who saved a fawn from drowning". Bahubali is the protagonist of two Indian movies which were critically and commercially successful and have developed a massive following.

Real "Bahubali" of #Assam who saved a fawn from drowning. pic.twitter.com/Wrm1Dppohk

Real "Bahubali" of #Assam who saved a fawn from drowning. pic.twitter.com/LIp0YOJ6mT

A scene in the movie "Bahubali: The Beginning", the eponymous protagonist emerges from a river carrying a massive Shivling on his shoulder. The photo of the boy carrying the fawn has been compared to Bahubali's feat. 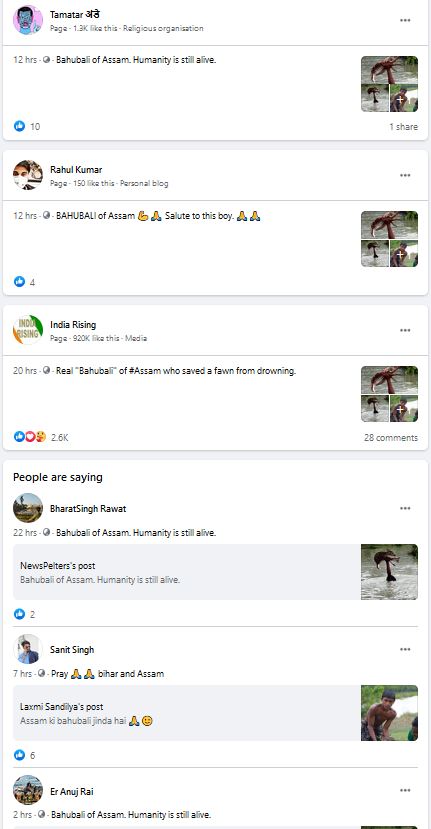 BOOM reverse searched the images and found multiple articles from 2014 about a boy saving a fawn from a flooded river. The Daily Mail reported that the boy "defiantly held the young fawn in one hand above his head as he plunged through the surging river."

The Daily Mail credited Hasibul Wahab and Caters News Agency for the photographs. A search on Caters' website yielded no results.

BOOM searched for Hasibul Wahab on Facebook, Instagram and LinkedIn and found a common account with the name Hasib Wahab. Wahab has linked his personal blog on his LinkedIn profile.

Going through Wahab's 2014 archives, BOOM came across this post from March 19, 2014. In the post, Wahab states that he clicked the series of photos at Nijhum Dwip, Noakhyali, Bangladesh while on tour. He further stated the photograph was taken on June 23, 2012.

According to Wahab, the boy's name in Abdul Mannan and he was 15 years old when the pictures were taken. Wahab claims that Abdul was not rescuing the fawn from drowning but rather uniting it with its herd across the flooded canal.

"I found the fawn alone stuck in mud near the canal in rain. I held the young fawn in one hand above my head and plunged through the surging canal to take the fawn near to the group of deer on the other side," Abdul is quoted to as saying by Wahab.

Wahab has posted one image on his blog which is similar to one of the photos being shared with the false claim.

Below is a screenshot comparison of the photo being shared with the false claim (L) and the photo in Wahab's blog (R). 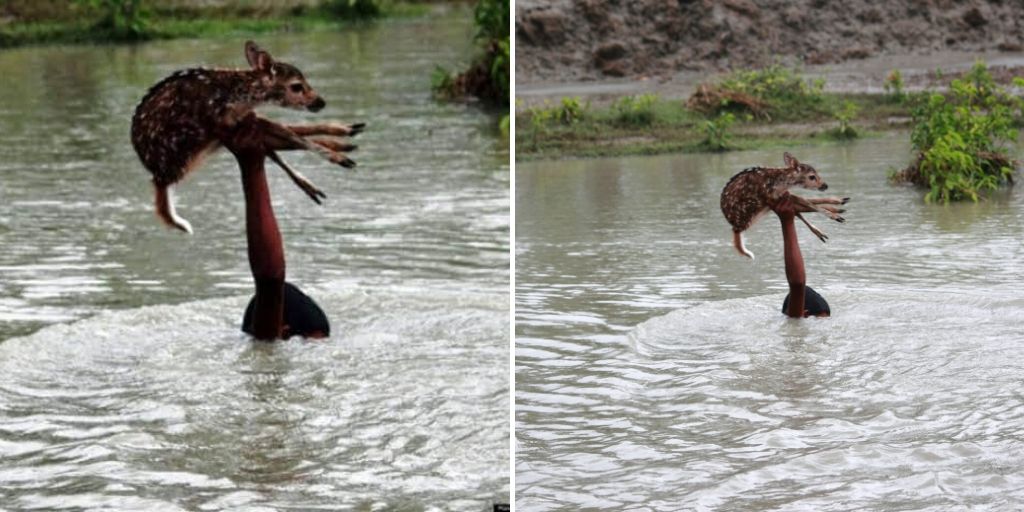 BOOM examined the EXIF data of the photo and found out that it was taken with a Canon EOS REBEL T2i camera at 3:28 pm on June 23, 2012. The data also shows the email id of the photographer which matches the email id provided in Wahab's blog. 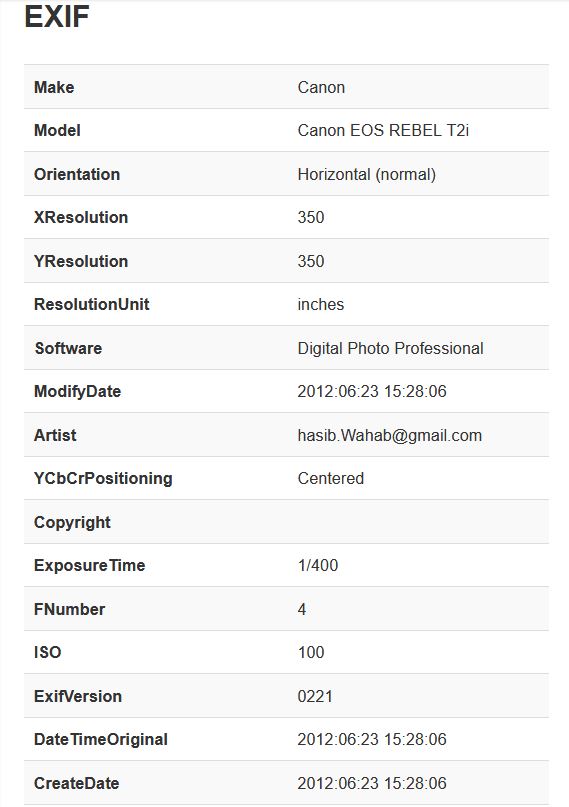 Incidentally, this is not the first time that the image has been falsely claimed to show floods in Assam. In 2016, the Assam government included the same image in its interim report on floods in the state to the then Union Home Minister Rajnath Singh. "It is a big mistake. We accept it. Actually some DCs have forwarded this to us because of similarity with situation in Kaziranga National Park," a senior official said to PTI on condition of anonymity.
Claim :   Photo shows a boy in Assam saving a fawn from drowning in a flooded river.
Claimed By :  Posts on Facebook and Twitter
Fact Check :  False
Baahubali Of Assam Bahubali Of Assam Baahubali Assam Assam Floods Assam Flood Flood Boy Saves Baby Deer Boy Saves Fawn Boy Saves Deer Assam Floods 2020 Bangladesh Bangladesh Floods Fake News Fact Check
If you value our work, we have an ask: Our journalists work with TruthSeekers like you to publish fact-checks, explainers, ground reports and media literacy content. Much of this work involves using investigative methods and forensic tools. Our work is resource-intensive, and we rely on our readers to fund our work. Support us so we can continue our work of decluttering the information landscape. BECOME A MEMBER
📧 Subscribe to our newsletter here. 📣You can also follow us on Twitter, Facebook, Instagram, Youtube, Linkedin and Google News 📝Stay updated with all our latest fact check stories.