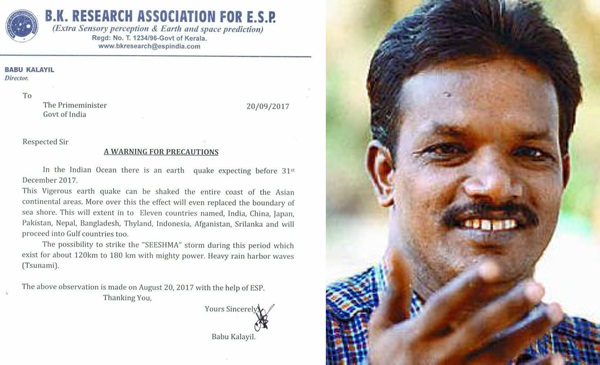 An image of a letter addressed to Prime Minister Narendra Modi predicting an earthquake in the Indian Ocean before December, 31, 2017 has gone viral on social media. The letter signed by Kerala based physics professor Babu Kalayil on the letter head of B.K. Research Association for E.S.P makes some startling claims. The letter with several spelling errors and grammatical mistakes claims 11 countries including India will be impacted and "Seeshma storm will strike the coast with speeds of 120-180 km with mighty power". Kalayil claims to have made this observation on August 20, 2017 with the help of ESP or extra sensory perception. 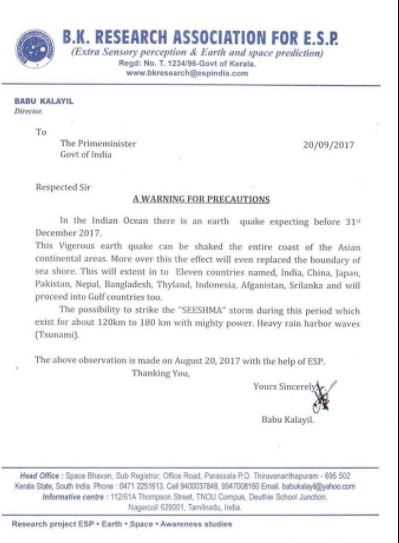 BOOM tried to contact Kalayil through the numbers provided in the letter. We also sent him a message seeking clarification on his claims. We are yet to hear from him.

In a radio documentary on ESP, made by Kerala based radio journalist Biju Mathew some years back, Babu Kalayil explained how he predicts natural disasters.

“When I am about to see a vision, my brain and body gets extremely hot,” says Babu. “Thereafter I can see a series of images. They are as clear in my mind like scenes from a movie. That was how I saw the tsunami. And with the help of intuition, I can find out when and where the event is going to take place. My skill would be vital to take adequate precautions when a natural disaster does take place, ” said Kalayil.

We spoke to Dr Vineet Gahlaut, Director of The National Centre for Seismology, established by the Ministry of Earth Sciences to address all earthquake related matters in the country under one umbrella of the Earth System Science Organization (ESSO). Gahlaut called Kalayil's claims "ridiculous" and said his claims are scaring people on social media. Gahlaut said that Kalayil should have waited to receive a response from his department instead of leaking it on social media.

"We are all working towards developing a technology that can predict earthquakes but none of us claim to having succeeded in doing that. At the same time all our efforts are towards mitigating the risks associated with natural disasters like earthquakes. Nowhere in the world has any agency succeeded in accurately predicting the time and location of an earthquake, " said Dr Gahlaut to BOOM.

"For any prediction to be taken seriously, two things have to be in place- location specificity and time specificity. You can't say end of 2017 and leave it at that. That is not a forecast but speculation and there is no scientific basis for such claims, " said Bagla, Science Editor at NDTV.

In the absence of any support from credible individuals or organisations, we are calling Kalayil's claims of an earthquake before December 31 on the basis of extra sensory perception powers, scientifically not proven.

But this is not the first time Kalayil has made such predictions. We found articles in the past where Kalayil has been quoted claiming that he predicted earthquakes before it took place. An article published in The Hindu in 2005 (the only credible source mentioning Kalayil's claims) says that "Babu Kalayil has, over the years, through his ESP faculty made "predictions" on the movement of planetary bodies, including collision between celestial objects, earthquakes, unusual rise in temperature and the like. He claims to have predicted even the major earthquake that caused the tsunami in December 2004, exactly two months earlier."

But when BOOM called Dr Renuka to know more about Kalayil, she now claims to have no information about him. Dr. Renuka also said that Kalayil had made several claims in the past, but she is in no position to affirm if they were correct.

According to Wikipedia, Extrasensory perception, ESP or Esper, also called sixth sense or second sight, includes claimed reception of information not gained through the recognized physical senses but sensed with the mind. The term was adopted by Duke University psychologist J. B. Rhine to denote psychic abilities. The scientific community rejects ESP "due to the absence of an evidence base, the lack of a theory which would explain ESP, and the lack of experimental techniques which can provide reliably positive results; and considers ESP to be pseudoscience."

Can earthquakes be predicted using ESP as claimed by Babu Kalayil?

Kalayil is not the first one to claim such sensory powers that helps him predict natural disasters much in advance. A U.S. based geologist Jim Berkland attained worldwide fame when he is reported to have correctly predicted the 1989 Loma Prieta earthquake in Northern California. According to a report, Berkland's technique included scanning newspapers during periods of new or full moons, to see if there is a high number of missing dogs and cats. He factored that information in with the tides and then predicted the probability of an earthquake hitting within a window of a few weeks.

Berkland theorizes the weight of the water during high tides places more pressure on plates and cause them to shift, resulting in earthquakes. He also said animals act odd before quakes.

But while Berkland is said to have predicted the 1989 earthquake correctly, he also claimed that another, smaller quake would strike in the weeks following Loma Prieta. He was suspended by his employer, Santa Clara County for generating "unwarranted fear." The quake he predicted did not occur. Berkland continued to make several predictions after that which never turned out to be true. But on the basis of his 1989 prediction that turned out to be true, Berkland cashed on his fame and established himself as an authority on earthquakes. A book was published about him in 2006 that celebrated him as "The Man Who Predicts Earthquakes".

But what about ESPs in animals?

The Economist in an article on ESP on January 4, 2001 writes that in 1975, tens of thousands of people were evacuated from Haicheng, in China, a few hours before a large earthquake struck the city. According to The Economist article, Chinese authorities claimed to have made the successful evacuation based on the strange behaviour of animals such as rats, snakes, birds, cows and horses.

Not yet, but as Dr Gahlaut says, scientists and geologists around the world are working towards that goal. Pallava Bagla's July 27, 2006 article in The Indian Express reported how a five-member team led by seismologist Harsh Gupta forecast on May 14 that an earthquake of magnitude 4 on the Richter Scale would occur in 10-km radius of Koyna within the next 15 days. Gupta had circulated it to several leading science journals. The forecast came true on May 21 when a quake of 4.2 magnitude rattled the area. It was hailed as the first scientific prediction of an earthquake.

But ever since that prediction in 2006, that feat has not been repeated despite several earthquakes in the last decade.