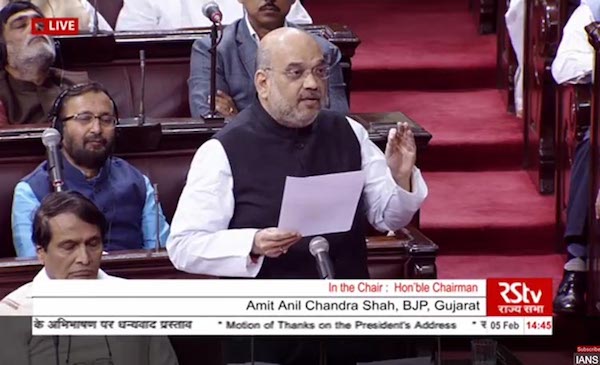 The Bharatiya Janata Party (BJP) president Amit Shah attacked the opposition in his maiden speech in the Rajya Sabha (upper house of Parliament) on February 5, 2018.

We fact-checked 10 claims made by Shah, of which three were true, three false, three partly true, and one unclear.

Three claims made by Shah on direct benefit transfer (DBT), shell companies, dynasty and caste politics were false: He exaggerated DBT savings by Rs 20,856 crore for 2015-16; claimed that over 73,000 more shell companies were closed by the government than actually were; the BJP also has dynasts, and crimes against scheduled castes (SCs) and scheduled tribes (STs) have increased by 6% and 5%, respectively, over one year to 2016 as per the latest data available. His claims on goods and services tax (GST), fertiliser factories and gas subsidies were partly true.

Here are the 10 claims made by Shah on our fact-o-meter:

Claim 1: We have opened 310 million bank accounts through the Jan Dhan Yojana scheme with deposits worth Rs 73,000 crore. Every family today has a bank account.

As many as 310 million bank accounts have been opened under the Pradhan Mantri Jan Dhan Yojana–a financial inclusion scheme to provide universal access to basic banking facilities and services–as on January 24, 2018, according to this reply by Shiv Pratap Shukla, minister of state in the ministry of finance, to the Lok Sabha (lower house of Parliament) on February 2, 2018. The accounts have deposits of Rs 73,588 crore.

Claim 2: There were 18,000 villages that did not have access to electricity when we came to power. We have completed the work of providing electricity to 16,000 villages.

About 16,282 villages, or 88%, have been electrified of the 18,452 unelectrified villages as on February 5, 2018, according to data from Grameen Vidyutikaran (GARV), a real-time dashboard tracking rural electrification. However, only 8% (1,290) of these villages have all (100%) households electrified, according to GARV data.

Claim 3: In 2016-17, more than 50 million farmers have benefited due to the Pradhan Mantri Fasal Bima Yojana.

As many as 57 million farmers have been insured under the Pradhan Mantri Fasal Bima Yojana (Prime Minister’s Crop Insurance Scheme) for Rs 202,145 crore in 2016-17, according to this reply by agriculture minister Radha Mohan Singh to the Lok Sabha on December 19, 2017.

It is, however, unclear how many farmers have benefited by having their claims processed under the scheme.

Claim 4: Our government has re-started six urea factories which were closed under the regime of various governments. More than 35 million farmers have been provided with soil health cards.

The government is reviving five closed fertiliser plants by setting up new ammonia urea plants, each with a production capacity of 1.3 million metric tonne per annum, according to this reply to the Lok Sabha by Rao Inderjit Singh, minister of state in the ministry of chemicals and fertilizers, on December 19, 2017.

The cabinet had approved the setting up of a new ammonia urea complex at Namrup within the existing premises of Brahmaputra Valley Fertilizer Corporation in 2015, Singh said.

As many as 110 million soil health cards have been issued to farmers in the last two phases (2015-17) and (2017-19) with an expenditure of Rs 368 crore, according to this reply to the Rajya Sabha by Parshottam Rupala, minister of state in the ministry of agriculture, on December 29, 2017.

Claim 5: The biggest economic reform in the world that has happened is in the form of GST, and it has happened in India. BJP never opposed GST, but opposed method of implementation.

Former prime minister Manmohan Singh had blamed the BJP for ‘blocking’ GST, according to this article in the Indian Express on February 11, 2011.

“The reasons that have been given, frankly, I cannot mention it in public. They say because you have taken some decision against a particular person, who was a minister in Gujarat (Amit Shah), we must reverse it,” Singh had claimed.

Narendra Modi, then Gujarat chief minister, had tweeted in February 2014, before the Lok Sabha elections that BJP was not against GST, and it would be difficult to implement without having a proper digital infrastructure.

On GST, I made it clear that BJP has never been opposed to GST. But, without proper IT infrastructure GST will be difficult to implement.

Claim 6: The country has been able to save Rs 57,000 crore from DBT every year, which I feel is a big achievement.

Claim 7: Notebandi (demonetisation) resulted in a crackdown on black money. We have closed over 300,000 shell companies.

Post demonetisation, the government identified 297,000 companies that were not operating or filing annual returns for two or more years, according to this reply by P.P Chaudhary, minister of state for law and justice and corporate affairs, to the Lok Sabha on January 5, 2018. Of these, 226,166 companies were removed by the Registrars of Companies as on December 19, 2017.

As many as 309,619 directors have been disqualified for not filing annual returns for a continuous period of three financial years, the minister said.

Claim 8: I am happy to say that about 13 million people gave up gas subsidies under Prime Minister’s initiative.

Over 10 million LPG consumers have voluntarily surrendered their subsidy under ‘Give It Up’ campaign as on January 30, 2018, according to this reply by petroleum minister Dharmendra Pradhan to the Lok Sabha on February 5, 2018.

Claim 9: It is our primary objective to modernise security forces for internal security.

Over three years to 2017-18, there was a 9% decline in budget allocation for capital investments against requirements, or “projections” in officialese, a factor that could delay procurement and modernisation of the armed forces, IndiaSpend reported on January 31, 2018

The air force capital budget was 46% lower than its requirements, the army’s was 41% and the navy’s 32%, the report said.

Claim 10: Prime Minister Narendra Modi has uprooted dynasty politics, caste politics and appeasement, which were deep rooted in our democracy.

The Congress party has long been accused of dynasty politics. Rahul Gandhi has now taken charge as the president of the Congress party, the fourth-generation leader from the Nehru-Gandhi family.

Not just the Congress, the BJP also practises dynasty politics at the national and regional level, The Wire reported on September 25, 2017.

Poonam Mahajan, daughter of late BJP leader Pramod Mahajan, is a member of parliament (MP) and the national secretary of the BJP.

Remember : Both PMs from BJP have no kids and BJP is only 37 yrs old.Even after this list BJP talks dynastic politics.Hypocrisy at its best! pic.twitter.com/xYidId0QN0

There were violent protests and conflict in Maharashtra, especially in Pune and Mumbai, during the first week of January 2018, among the scheduled castes and the upper caste Marathas over the two-century old battle of Bhima Koregaon near Pune.

As many as 119,872 and 19,671 crimes against SCs and STs were reported over the last three years, respectively, according to National Crime Records Bureau data.

This article was first published on factchecker.in