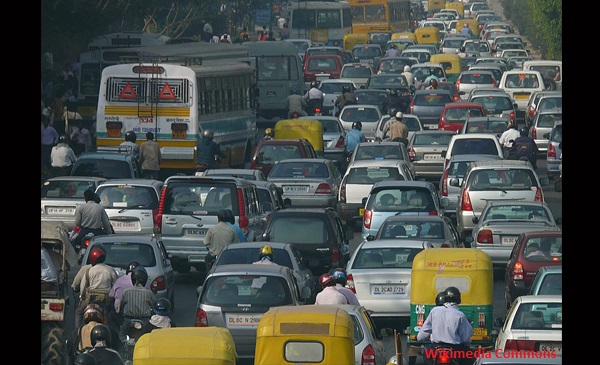 On November 11, the National Green Tribunal had approved the Delhi government's decision to implement the scheme but with no exemptions to anyone. It said that odd-even scheme should be implemented when PM 10 crosses microgrammes per cubic metre (μg/m3) and PM 2.5 crosses 300 μg/m3 in 48 hours. However, the government withheld the move.

PM 2.5 are particulate matter smaller than 2.5 micrometers found in the air which upon inhalation can penetrate deep into the respiratory tract and lungs increasing the risks of cardiopulmonary diseases such as asthma, bronchitis and can even lead to a stroke.

Talks on implementing the odd–even scheme had begun as air quality in the national capital had worsened over the past week with the city being engulfed with toxic smog.

Below is the real-time map of air pollution of November 13, 2017 as monitored by Berkeley Earth, an US organization that keeps track of climate change. It shows PM 2.5 levels in Delhi to have reached 'hazardous' levels and the neighbouring states with 'very poor' levels.

But how effective is odd-even against pollution in Delhi? Is the AAP government pushing for a highly visible scheme but low on benefits? We bring you a fact file on all the things you need to know about the odd-even scheme and its impact on the pollution levels in Delhi.

What is the odd-even scheme?

Odd-even is a car rationing scheme which allows odd and even numbered vehicles to run on alternate days. In India, this was introduced by the Aadm Aadmi Party in New Delhi as a measure against rising air pollution in Delhi.

The national capital implemented odd-even in two phases on experimental basis during January 1-15, 2016 and April 15-30, 2016 to see the impact of reduction in vehicular emissions on air quality. However, the scheme applied to only four wheelers. Women, VIP vehicles, public transport, two wheelers, trucks and CNG run private vehicles were exempted.

What was the effect of odd-even on Delhi’s air quality?

The rationing of vehicles through the two phases of odd-even did not make a big difference in the air quality.

Below are comparisons of 24-hour average PM 2.5 levels pre and during odd-even for both the times it was implemented in Delhi.

Note: The PM 2.5 level values are daily averages of all stations across Delhi

In both the phases, when odd-even was implemented in Delhi, PM 2.5 levels did not see any decrease. The table above shows that there was a rise in pollution in most areas.

Why was the odd even scheme not effective in Delhi?

Vehicular pollution contributes to only 25% of the air pollution during winter, according to an IIT Kanpur study. And 1/3rd of PM levels in Delhi is due to emissions from sources out of Delhi. Especially during the months of October - November, emissions from crop residue burning in agricultural lands of neighbouring states of Haryana and Punjab moves to Delhi with the wind.

Being a land locked city, Delhi is at the receiving end of polluted air from neighboring states and has limited options for flushing it out unlike cities like Mumbai which has the sea to its advantage. Thus, pollutants remain trapped in the air making Delhi a gas chamber.

Air quality in Delhi is highly dependent on meteorological factors such as wind speed, mixing height and temperature. Mixing height refers to the height to which suspended particles in the air rises leading to vertical mixing of the air.

Note: The PM 2.5 level values are daily averages of all stations across Delhi

With PM 2.5 levels having gone up again in the past two days, Delhi government is reconsidering the decision to implement odd-even. Following are the graphs which show PM 2.5 levels in different parts of Delhi between November 1-12, 2017.

The above data clearly show that while the AAP government is pushing for the odd-even scheme, its efficacy to resolve the pollution problem, which has more than vehicular pollution as its sole source, is yet to be proven. The three state governments of Delhi, Haryana and Punjab are yet to come to a common platform to figure out innovative ways to resolve this problem. Meanwhile, political rhetoric is at its peak with the chief ministers battling it out on Twitter even as Delhi residents suffer waiting for a solution.

Share your concern over stubble burning and pollution @ArvindKejriwal, Centre alone can solve the problem given its national implications.

(This story has been updated to include the National Green Tribunal's order on November 14, 2017)