Leading news websites - FirstPost, News18.com, Times Now and The New Indian Express took down a story which linked Bharatiya Janata Party President Amit Shah's name to an Ahmedabad-based co-operative bank. The story said that the bank “netted the highest among such banks of old Rs 500 and Rs 1,000 notes” after demonetisation was announced on November 8, 2016.

But unlike others, The Economic Times retained the entire IANS story but removed references to Amit Shah who was mentioned twice in the original script. 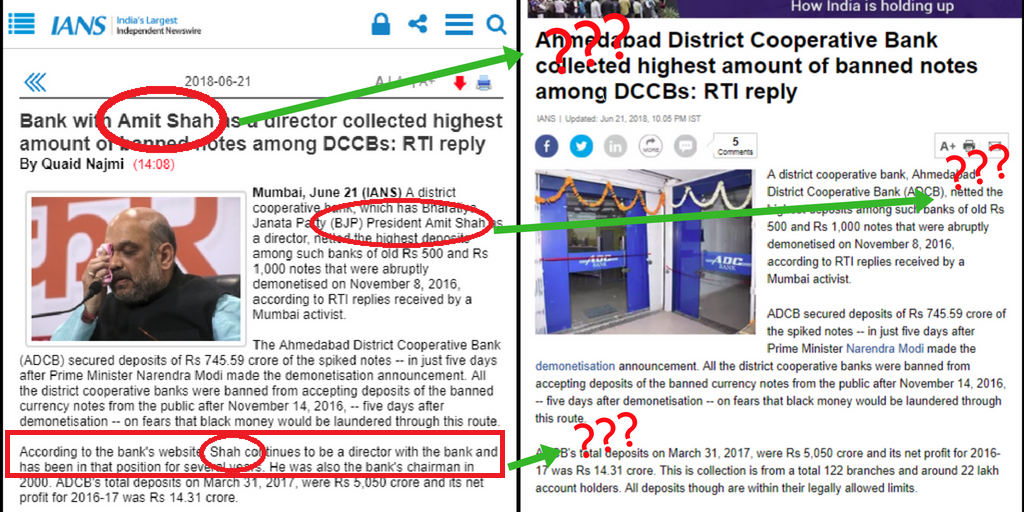 While references to Amit Shah was scrubbed from the story, the 'Read More' tags at the bottom of the story do show reference to the BJP leader, thus making it clear that someone had hurriedly deleted the name without changing the tags.

BOOM contacted Deepak Ajwani, editor of the ET website who said that he is not authorised to speak to the media.

The online division of The New Indian Express pulled down the story on June 21, hours after publishing it. A source in TNIE revealed that the story was up on the site for atleast four hours on June 21. Click for the cached version here.

“We don’t have an automated feed for IANS so the desk has to take stories from their site and then upload it. While the desk did publish the story, we were told to take it down by the seniors who said there were discrepancies in the story,” said the source not wishing to be named.

BOOM contacted the online editor of the newspaper Suresh Ivaturi, who said that he will get back to us with their explanation. We are yet to receive any reply.

BOOM also accessed the archived version of the story on FirstPost which was published on June 21 with the title, ‘Cooperative bank with BJP boss Amit Shah as director collected highest amount of banned notes among DCCBs, reveals RTI reply’.

Similarly, News18.com and Times Now also took down the story. Incidentally, Lokmat News 18, the Marathi language wing of the site, had the story till the afternoon of June 22 before they too took it down.

The story which was first published by wire agency Indo Asian News Service (IANS) on June 21, stated “The Ahmedabad District Cooperative Bank (ADCB) secured deposits of Rs 745.59 crore of the spiked notes -- in just five days after Prime Minister Narendra Modi made the demonetisation announcement. All the district cooperative banks were banned from accepting deposits of the banned currency notes from the public after November 14, 2016, -- five days after demonetisation -- on fears that black money would be laundered through this route.”

The story mentioned information had come from a reply to a Right to Information filed by activist Manoranjan Roy. The story connected Shah to the said bank via the bank’s website stating, “According to the bank's website, Shah continues to be a director with the bank and has been in that position for several years. He was also the bank's chairman in 2000. ADCB's total deposits on March 31, 2017, were Rs 5,050 crore and its net profit for 2016-17 was Rs 14.31 crore.”

BOOM checked the website of the the Ahmedabad District Cooperative Bank and found that it does mention Shah as one of the directors. 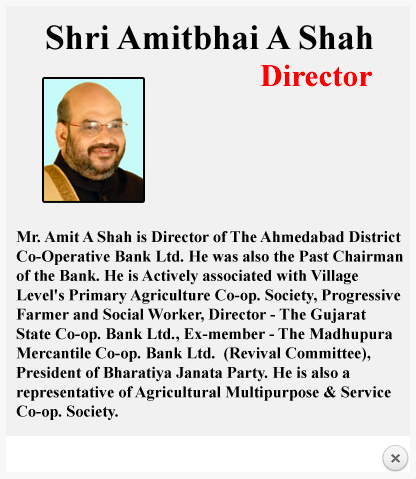 Meanwhile, Managing Editor of IANS Hardev Sanotra has strongly defended the reporter who wrote the story.

"We stand by our story. It is based on facts and RTI. We have nothing to hide," Hardev Sanotra to BOOM.

BOOM contacted the editors of FirstPost, News18 over email and calls but is yet to receive a response from any of them. We were not able to reach the RTI activist Manoranjan Roy as his number is not reachable.

It is not clear why the story was taken down by many websites or retained with Amit Shah's name deleted like in the case of The Economic Times. While the links to Amit Shah made the story go viral, IANS has not made any references to the district bank receiving any undue benefit from their linkage to the BJP chief.