India is now the world’s fastest-growing major polluter. Diesel-powered transport systems are a major contributor to pollution and hence replacing them with electric alternatives has now become imperative.

The findings have special significance because primary mass transit in Indian cities is provided by 150,000 diesel buses, held responsible for contributing to urban smog and carbon emissions that are warming the planet.

As much as 25 tonnes of carbon dioxide (CO2) emission can be cut every year for every diesel bus replaced by an electric bus, said the IISC study, conducted by Sheela Ramasesha and her group at the Divecha Centre for Climate Change in Bangalore. Electric buses emit no CO2, but the electricity needed for their charging stations comes primarily from coal-fired power plants, India’s primary energy source.

Apart from reducing outdoor air pollution—which kills 670,000 people in India every year, according to this Indian Institute of Management, Ahmedabad paper—a clean bus system would aid national carbon-reduction targets. Transport accounts for a tenth of India’s greenhouse gas emissions, as we reported here, with a 2009 study attributing 95% of these emissions to road transport.

India is now the world’s fastest-growing major polluter, as we noted here, contributing to almost a third of global emissions growth in 2014.

Using a Chinese-built electric bus provided for a three-month free test run to the Bangalore Metropolitan Transport Corporation (BMTC)—India’s largest and most-efficiently run bus fleet—Ramasesha and her colleagues ran their tests on a pre-existing route with an average daily travel of less than 200 km (the bus’ battery could run 215 km before recharge).

They compared economics and environmental impact of the electric bus with a diesel bus on the same route over a period of 93 days in 2015. 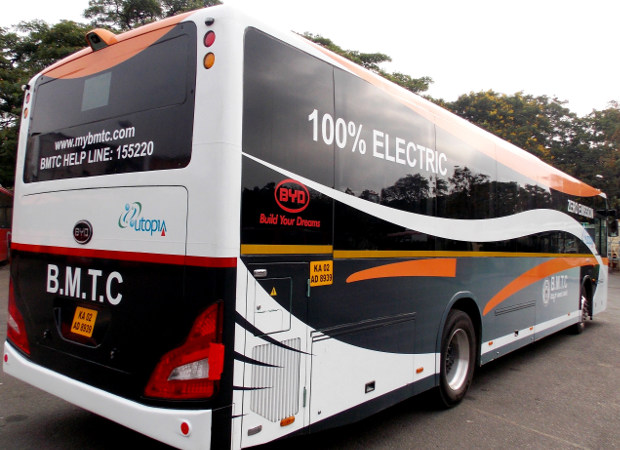 The electric bus was not just cleaner for the environment but also made economic sense. The revenue generated by both buses was almost the same while profits, as we said, were 82% higher. This is because the maintenance and variable costs of the electric bus are lower than its diesel cousin and its energy efficiency is higher.

The only downside of the electric bus is its relatively high price (Rs 30,000,000 vs Rs 8,500,000 for a diesel bus), which could reduce if electric buses are manufactured in India. The bus used for the tests was imported from China.

The electric bus was an easy winner, emitting about 50 kg less CO2 per day than the diesel bus. The diesel bus emitted 77 tonnes of CO2 every year.

The role of diesel heavy vehicles in carbon emission

Diesel-powered buses and trucks contribute higher CO2 than lighter motor vehicles powered by petrol, this study in the journal Atmospheric Environment reported in 2009.

In 2010, India and 21 other Asian countries committed to more sustainable transport fuels and technologies, “low-carbon transport initiatives to mitigate the causes of global climate change and to fortify national energy security”.

Despite the high initial investment, the absence of tailpipe exhaust fumes, silent running, and lower idling motor energy losses at bus stops or traffic signals could make the electric bus one of those technological options for urban India.

This article was republished from IndiaSpend.org. Padmanaban is a Bangalore-based journalist.